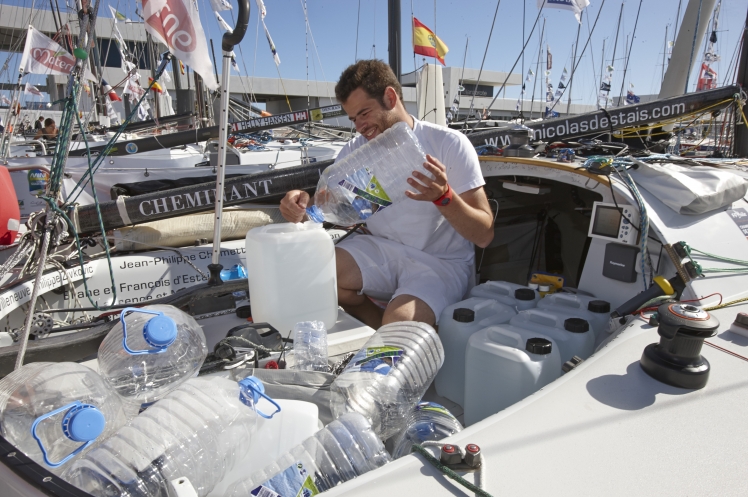 The competitors of the Mini Transat îsles de Guadeloupe are starting to get restless. After more than three weeks in port for the first stopover, they are eager to get racing, to finally take on the Atlantic crossing they have all been dreaming about. But, to reach the other side of the duck pond fit and clear-headed, they will need to properly organize their food and drink supplies.

The flavors of the palace
Overall, the racers try to find the right balance between several constraints – the first of them being the weight. On the Minis, it is not so essential to have only freeze-dried foods, since the competitors will not have a desalinator on board. The advantage of preserved vacuum-packed food quickly becomes apparent, especially since both the taste and texture are closer to homemade food. And there is always room for some delicacies: aboard Nautipark, Fred Denis has already thought about the long hours of solitude on the Atlantic: “I found a good bread that should keep for more than a week, with a little parma ham, something for the sweet tooth also, energizing powders to mix with water, just for a little pleasurable variety…”

Not all take matters that far, even if food remains a serious concern. Tanguy Le Turquais (Terréal) has had all his food, mostly preserved, vacuum-packed, brought over from France. Everything is codified and planned to strike a balance between enjoyment and efficiency. “You also need to have something to snack on right away. Sometimes, getting down inside the Mini to prepare food is simply impossible. That’s why I carry a lot of dried fruit. And grapefruits! They keep well and it’s so good to still have fresh fruit after several days at sea”, says Ludovic Méchin. Others have opted for more minimalist solutions, like Carl Chipotel (Gwadloop!): “For me, freeze-dried will be my lot! I will wait until arriving home to find the flavours of the Antilles”.

Water, water
For the second leg, the racers will be allowed to take on board 120 litres of water or various edible liquids. That is, about 6 litres of water per day on a basis of 20 days of racing. This may seem a lot, but all the doctors’ opinions converge: in hot weather, a skipper should drink from three to four litres of water per day to avoid becoming dehydrated. Anything less can lead to the mental faculties suffering. A dehydration of 10% would amount to a sleep deficit of several hours. To stay clear-headed, the racers need to be thinking of drinking without moderation.

Get One Good stuff from the Lightning class….

song of the sea