The start of the 2015 TJV will be light and downwind for all classes, but by tonight the duos will be out in a decent 20kt Southerly breeze, getting West as fast as they can towards the on coming low pressure. 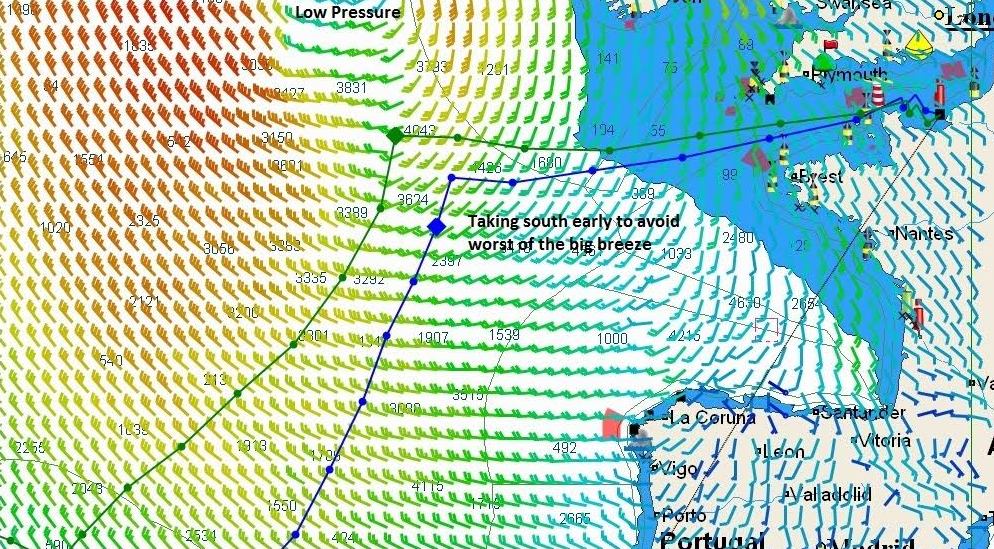 I spoke yesterday about the weather playing a big part of deciding the winner between old vs new in the 60’s, and it looks to me like the new boats have won the weather war. For the first few days at least. With predominantly reaching and downwind conditions forecast. This is exciting for us because it is the first time we will get to see them in action, under the spotlight of the tracker, in what they declare to be ‘their conditions’. Moment of truth!

A deep low pressure system is the biggest player for the first 3 days of the race for all classes. The low is currently mid Atlantic and is slowly making its way East. By Monday afternoon the low deepens to 970hPa. Add on top of that the seastate as it would have been around a while, and boat preservation starts to become a factor. This means that rather than pressing on to gain some easy Westing while the going is good you could see teams head south early. This is a pretty high risk move strategy wise however, as you commit to a slower upwind route. But you have a lot less chance of breakages.

On my routings for the Ultimes I have set a 30kts TWS limit to try and show how their tracks will differ to the 60’s and 40’s who arrive at the low later once it has calmed down a bit. What I think the Ultime guys will be trying to do here is line themselves up on the southern side of the low and tack as late as they dare, ideally as soon as the big right shift comes, allowing them to get SW fast before the really big breeze heads their way.

For the 60’s and 40’s the first few days will be a similar game but with a different end goal. Rather than heading south early to avoid the worst kick from the south western edge of the low they will all most likely look to just head West as fast as possible, staying North and lining up the eye of the storm. Once through it, they will be out into the NW winds backing W’ly, enabling them to then get south and with a really fast angle. 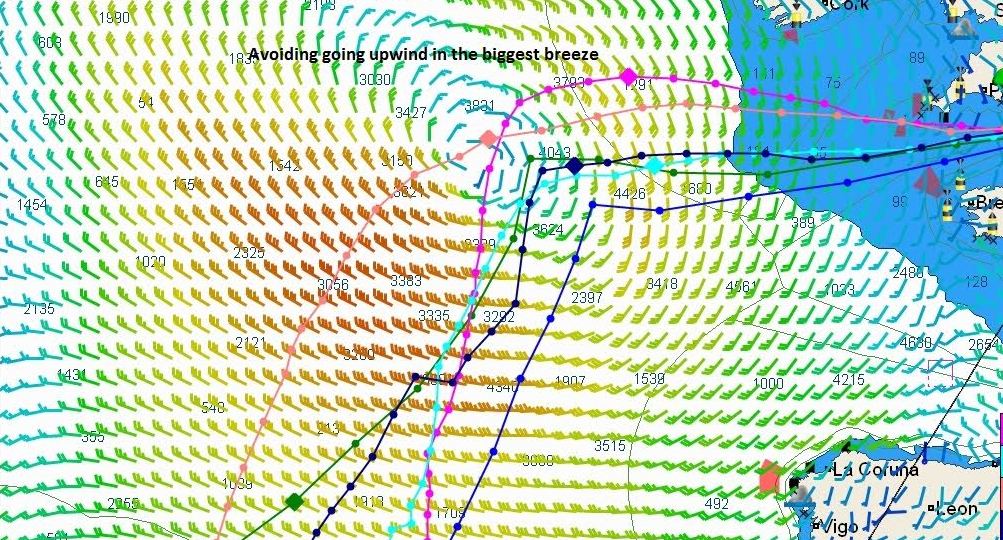 I am not seeing any possibility of a southerly sunshine route at all at the moment for 2 reasons. Number 1 is that there are SW’ly winds along the West coast of Spain and Portugal, meaning slow upwind sailing. And secondly getting West later on looks to be really hard. On top of that when you eventually do get down to the trades, rather than a fast reaching angle you will be VMG downwind, meaning those who did not take the easy Westing early will see a painful loss of miles all the way down to the doldrums. Some boats just looking to finish the race could well take this route.

In a few days I will report back on how the fleet tackled this low pressure and take a look at the South Atlantic as the teams look to line up their crossing of the doldrums. – Henry Bomby.