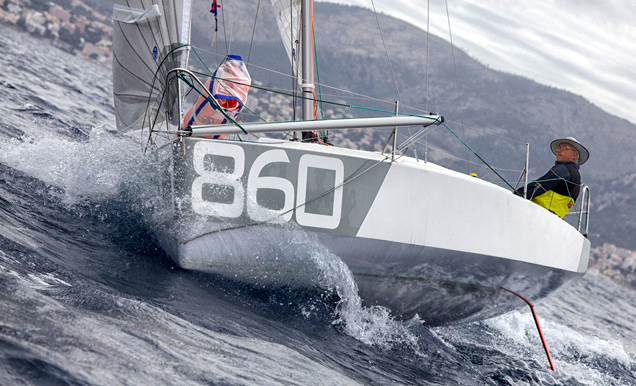 I would like to share with you the story of my friend Nacho Postigo. He is one of the most passionate sailors that I know. And his life dream was to take part in the mini transat. He has a long racing profile, and now he is in his mid 40’s and ready to achieve his dream. He has dedicated the last two years to develop his Argo 6.5 mini and to qualify for the race.

He has won all 5 qualifying races, and we all of his friends were looking forward to see him taking part in the big race.
But as they say, the most difficult part of the oceanic races is to cross the start line. And the most incredible thing happened the day of the start. The guy towing him out of the harbour made a huge mistake, and despite Nachos warnings and shouting he crushed his boat against the rocks, breaking the bulb and the keel.
photos here.

And then a second race began, a race against insurance companies, against time and all kind of logistics problems. The race organizers assumed full responsibility for the crash, and assured him he could make the second leg and give him a regress.. but to do that, he needed a new keel , fit it and sail all the way to the Canary Islands. Of course the insurance company is not making things easy, but after a crazy couple of weeks, he has made it, and the boat is ready for the second race in Lanzarote, and Nacho , as passionate and crazy as he is, he is on his way to Malta to take part in the Middle Sea Race, right before crossing the Atlantic in his mini “Vamos Vamos” ( Spanish for go go! )
All info and photos on his Facebook page. – Anarchist JR.

no cash, no splash