Sure, UK Sailmakers focuses on making fast, durable sails; but we’re also interested in making the sport of sailboat racing better, more enjoyable, and safer. Here’s something to consider: 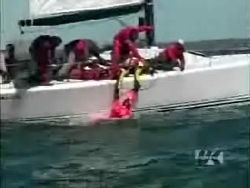 Over the past few years a lot has been written and discussed on safety-at-sea: man overboard training, storm sails, PFDs, harnesses, etc. In fact, you’ll find a lot of instructional safety-at-sea videos in the Education section of UK Sailmakers’ website. But, in addition to being contributors to the Safety-at-Sea media process, UK has gone well beyond just talking the talk.

For more than a decade, UK Sailmakers’ staff has been highly involved with the Storm Trysail Club’s and Storm Trysail Foundation’s successful Safety-at-Sea programs. “UK Sailmakers has been involved in the development of safety-at-sea training programs and materials for many years,” said UK’s Charles “Butch” Ulmer, “and we believe that safety-at-sea knowledge is just as important for cruising sailors as it is for racers. These educational efforts are our way of giving back to our sport something of real value.”

An important component of these efforts has been their leadership roles for Storm Trysail’s Junior Safety-at-Sea Seminars. Initially held for hundreds of Long Island Sound juniors every July at Larchmont Yacht Club, this program has expanded to include events run by STC members in over a dozen areas across the country.

UK’s safety-at-sea team was also closely involved with creation of the Storm Trysail Foundation’s adult-focused Hands-On Safety-at-Sea Seminar held in recent years at the SUNY Maritime College. At these concentrated one-day seminars, participants receive classroom, practical, and on-the-water instruction including: using a fire extinguisher to put out a fire, jumping in a pool with full foulies and a life jacket to practice drown-proofing and climbing into a life raft, shooting flares, on–the-water practice of sailing back to a man overboard, and more.

These seminars and crews practicing their techniques have saved lives. A month after one of the seminars, I sailed on the Sydney 43 CHRISTOPHER DRAGON in the American Yacht Club’s Spring Series when we lost one of our crew overboard while we were in our starting sequence. Fortunately CHRISTOPHER DRAGON was one of the boats used to teach man overboard recoveries and her skipper had learned that his boat, with its extremely high aspect keel, could not do a textbook quick stop recovery. During practice, he learned that the boat was un-steerable at slow speeds without the jib. Therefore, instead of trying to come up to the person and stop with the jib down, the crew of CHRISTOPHER DRAGON knew their best option was to deploy the Life Sling and sail around the MOB until he got hold of the polypropylene line. Only then was the boat stopped. In this real-life recovery, the MOB was picked up in two minutes and we still had time to get a good start.

Perhaps even more encouraging was the situation that unfolded this past August 1 at Atlantic Highlands (NJ) Blue Water Regatta when, during a crowded rounding of a leeward mark, the owner/helmsman of the J/105 BIGAMY went over the side. Although the boat was crewed mostly by adults, it was 17-year-old Brandon Horvath, participant in multiple STF Jr. Safety-at-Sea Seminars, who grabbed the helm, assigned a “pointer,” and turned the boat for a quick stop. Although the MOB was quickly retrieved by a trailing boat, the crew on BIGAMY, led by this teen, reacted properly and was in position to retrieve their MOB had the other boat not been there.

These lessons show that you have to practice safety-at-sea with your own boat and your own crew to know what works for you–not just what the text books tell you what to do. Moreover, these two instances demonstrated that every crewmember needs to be familiar with the necessary techniques and not just the owner.

UK Sailmakers will continue to invest in sailors’ safety-at-sea by enabling members of its senior management team and loft owners the opportunity and resources to make these programs possible. If you have any thoughts, suggestions or questions on safety-at-sea programs and resources, e-mail me at [email protected].