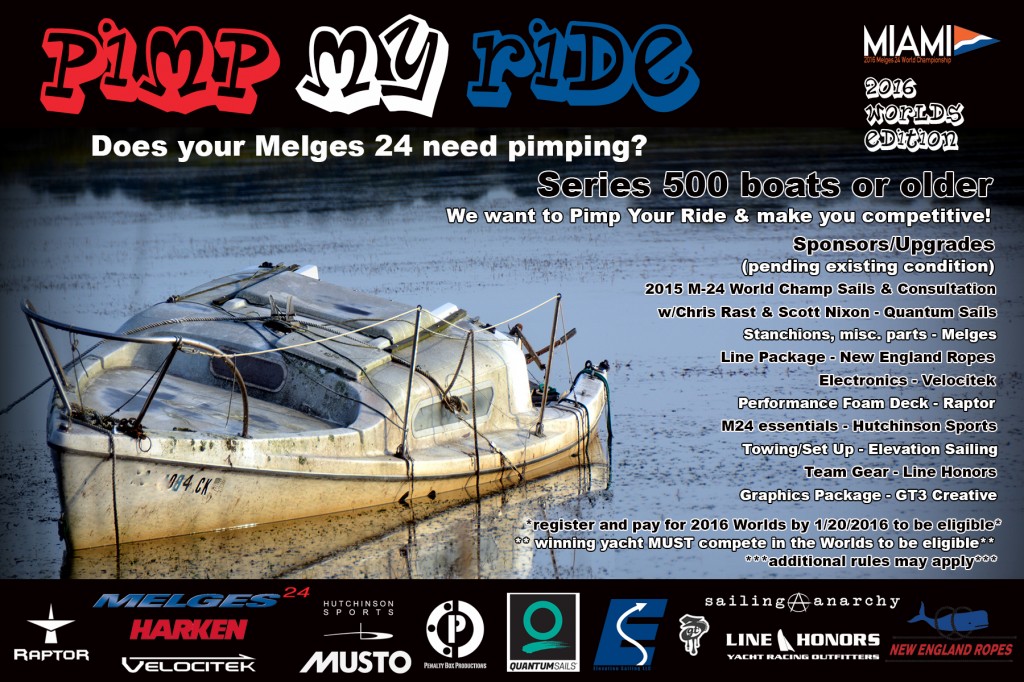 We’ve always maintained that the Melges 24 probably provides the most enjoyable one-design racing experience for the average sailor.  With the perfect blend of convenience, hard work, competition, adrenaline, and personality, the 20+ year-old class continues to fire on all cylinders, especially in Europe, where 100+ boat fleets are a common occurrence.  But the debacle of an Annapolis Worlds in 2009 set the US Class down a bad road – 0ne that it’s finally recovering from, and with a vengeance.  And with the appeal of a Worlds one of the best marketing tools of any class, organizers and sponsors behind the 2016 Melges 24 Worlds Miami have joined with Sailing Anarchy to bring you the coolest contest we have EVER run: It’s Pimp My Ride, Melges 24 Worlds Edition!  Here are the details:

Are you thinking about going to Miami for the 2016 Melges 24 Worlds but are worried that your older boat won’t be competitive?

– How often have you taped the cover of your jib sheets hoping to get a few more races out of them?

– How often does your spinnaker halyard slip through the cleat leaving you shrimping while the fleet passes you by?

– Do you find yourself tightening the same screws race after race?

– Have you ever rigged “old” spinnaker sheets because they are in way better condition than your “new” ones?

If any of the above sounds familiar, than we want to PIMP YOUR RIDE!

Now of course we aren’t going to install a pop-up flatscreen with XBOX controls to pop out of the deck.  Nor we will replace your corrector weights with 15″ subwoofers and a power amp.  But with the help of a great group of supporters in the world’s best one-design class, we are going to PIMP YOUR RIDE!

The organizers for the 2016 Worlds and the IMCA Class President Jens Wathne have come up with a concept to get your older boat tuned up, dialed in, ready to race on the Worlds starting line. And in the process, we’ll show the rest of you older Melges 24 racers how it is done right.

The lucky winner of the Miami Melges 24 Worlds PIMP MY RIDE Contest will have a complete makeover for their boat, with the work done by some of the most skilled folks in the Melges racing world.  We’re not talking a few sheet bags, folks – we’re talking tens of thousands of dollars in value for your prized speedster!  New sails, electronics, sheets, halyards, standard rigging, lifelines, stanchions, graphics, team gear, and more!  As the Donald would say, this is YUUUUUGE.

To qualify you MUST:

– Agree in writing to let us take your boat with us as it makes the journey into a modernized competitive state by going from vendor to vendor while we film every step of the way. *estimated 4 weeks total.

– Agree in writing to deliver your boat to Worlds a minimum of two days before Worlds.

– Agree to media appearances and several interviews during the event.
*additional rules may apply*

We will randomly select 1 winner during the awards ceremony of 2016 Quantum Key West Race Week (attendance not required).  We will then send over our team of experts to evaluate your boat, set up a work schedule, and PIMP YOUR RIDE!

We know it can be hard to keep up with the latest and greatest, and boat work may have slid down the priority list, but its never too late to bring a Melges 24 back up to competitive condition. Some of the oldest M24s are still blazing fast today, it just takes some PIMPIN’.  We’ll see you at the starting line.  REGISTER AND PAY TODAY OVER HERE.

Got burning questions?  Email the boss man at [email protected]

and now, for something completely different