You didn’t think Ryan Breymaier had disappeared, did you…? 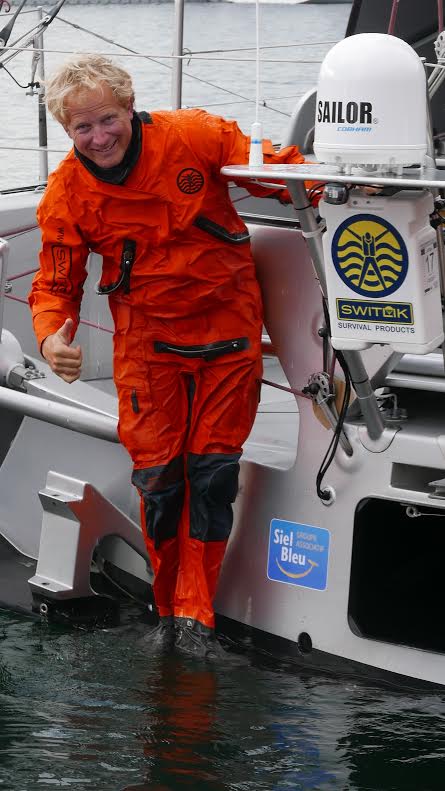 One week until the start of the Transat Jacques Vabre. Nico and I have been here since Thursday and are ‘almost’ ready to go. For those that don’t know I will be racing with Nicolas Boidevezi on his Farr 2007 IMOCA that was Veolia in 2010 for Bilou’s Route du Rhum win and then Hugo Boss in 2012 for Alex’s third place in the VG.

Nico has had great success in the mini since 2009 with three mini transats under his belt. Now he’s secured his boat and even though he’s still looking for a sponsor for the VG in 2016, he and I agreed it would be criminal to leave the boat at the dock for this race, so here we are! He’s named the boat “Adopte Un Skipper”. Don’t think he can get any clearer than that!

The race village opened officially yesterday and we (the skippers) were paraded around and introduced to the crowds, the rain mercifully stayed away but if the past three TJV are anything to go by, it WILL rain before we leave. In the 10 days run up to the race in 2013 there were over 350,000 people visit the race village and we’re expecting the same, if not more this year, if not for anything but the bumper crop of boats here to race.

Not only is there a record number of IMOCA participating, 20 boats including five brand new machines with their foils (BP, Safran, Gitana, Virbac) and (Hugo Boss if they manage to get here)…. that we’re all dying to see in action. Francois Gabart has brought his impressive new MACIF, baptized this morning the beast lies in wait, just behind Sodebo and Thomas Coville, ready to give things another go after fixing all the woes of his Route du Rhum crash. Just watching those two is going to be awesome. My buddy Bilou is also in the big multi mix, co-skippering Prince de Bretagne with Lionel Lemonchois. There’s a great fleet of Class 40’s competing for the title, my personal favorite has got to be V&B. Not because V&B stands for Vin & Bier (wine and beer), though it’s a good reason, but also because its the latest Mach 40 from Sam Manuard’s drawing board and he’ll be co-skippering the boat to Brazil.

Even though I’m doing this race on a boat with no sponsor, it doesnt mean I don’t have any support. I am now a proud ambassador for Maui Jim sunglasses and I’m really happy to be wearing them for this race and also to need them so far this week! I also have the great support of Switlik for survival gear and my trusty dry-suit. I wore one of these first when I did the Transpac in 2013 (thanks for the intro John Sangmeister) and I don’t go offshore without it. Attached a couple of shameless plug pics. Yes, I did get into the cold water of the port for the Switlik photo, that suit actually works!

this is a club you'd love to be a member of

flying in for the win