We are total junkies for pretty much anything Paul Larsen does.  And when it has to do with foils, supercavitation, and ludicrous speed, we can’t look away.  So here’s a long report – with almost no sailing in it at all – that we ripped from the SailRocket site in full.  Go see Paul’s creation at the Advanced Engineering Show in Birmingham, England on the 4th and 5th of November.

Well, to be honest, that all got a much closer to really happening than we expected when we set out. In the end the real show stopper was the same old nemesis of all speed sailors… the weather. The forecast changed rapidly and the stiff SW-WSW winds we were looking for simply faded away. These winds would have enabled us to run in close to the Cause-way along the shore where the water is flat and we have places to rig, launch, lower and retrieve the boat. Alex and I went out in a RIB (Thanks Tom Peel) and surveyed the course on the expected 1.25 meter tide. I haven’t done this since we last sailed SR1 here in 2006. I was surprised to see how close I could get in and there was actually a lot more room than I was expecting. It was definitely do-able… almost comfortable. 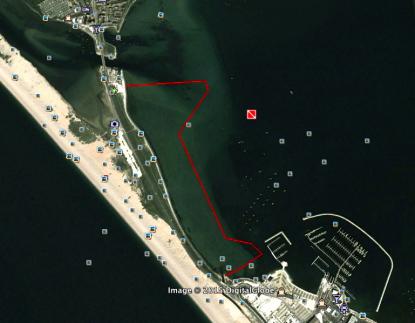 THE RED LINE SHOWS THE PROPOSED COURSE WE WOULD AIM TO TAKE. WE WOULD TOW SR2 TO THE BEACH AT UPPER LEFT AND RAISE THE WING THERE. SR2 WOULD THEN BE EASED OUT AND ALLOWED TO DRIFT DOWN-WIND UNDER THE GUIDANCE OF THE SUPPORT RIB. ONCE CLEAR OF THE SHORE SHE WOULD BE RELEASED AND I WOULD TRY AND GET HER STARTED BY SAILING HER BACK INTO THE WIND TO CREATE APPARENT WIND AND ALIGN ALL THE WING SECTIONS. ONCE OVER HER LOW SPEED DRAG HUMP AND SAILING BACK IN TOWARDS THE SHORE, I WOULD CONTROL HER SPEED TO BOTH INCREASE IT AND PREPARE FOR A GOOD LINE UP WITH THE SPEED COURSE ALONG THE SHORE. THE COURSE (LONGEST STRAIGHT LINE HERE) WOULD GIVE ME A GOOD FAST 500 METER STRETCH. I WOULD THEN HAVE ENOUGH ROOM AND DEPTH TO SHEET OUT, SLOW DOWN, TURN AWAY FROM THE SHORE AND GIVE MYSELF ROOM TO ROUND UP INTO THE WIND AND STOP. FROM THERE A RIB WOULD RE-ATTACH AND TOW ME TO THE SHORE SO WE COULD LOWER THE WING. TOTAL DISTANCE 1.26 MILES.

Regardless of the fact we didn’t actually get on the water, it was an excellent excercise for all of us. Sailrocket 2 now goes away completely battle ready, serviced and dry. It showed we could sail her on short notice if need be. I am also confident we could do a 50+ knot run in Portland Harbour on a decent day.

Other aspects raised their heads such as getting the Third Party liability Insurance that would be required to operate in the Harbour. The Harbour Masters Office sounded as keen as us to see us on the water but understandably wanted boxes to be ticked, a risk assessment ot be presented and to be there on site themselves to monitor it. That’s all fair. Thankyou to everyone who piled in with help, advice and contacts regarding the Insurance. Only one company, Fastnet Marine Insurance, came up with anything solid we could have gone forward with on such short notice. Basically it was going to cost £1,000 or therabouts to do one run. It was a lot for what was going to be a “jolly” but once again, understandable considering  the request and the short notice. Thanks to some of you who offered to contribute to it all. I will continue the discussion with the Harbour Master and also with the Insurance companies so that we will be better prepared if a next time comes.

So that was the only weather window we had. Sailrocket 2 will have her now completed wing put on her one more time in front of the WPNSA on Thursday… just so all those at Weymouth Speed Week… and anyone else who passes by can have a good look. After that she gets stored away in her container in preparation for appearing as a guest at the upcoming Advanced Engineering Show at the NEC in Birmingham from 4-5th of November. We will be there on site to show her off.

A VISIT FROM SPEED SAILING ROYALTY…

Despite not sailing the Rocket yesterday, we did have a visit from one of the sport’s true heroes. Erik Beale flew in especially to see us. Erik was the first sailor to do a 40 knot run in 1988 and he is still firing his windsurfing creations down trenches today. 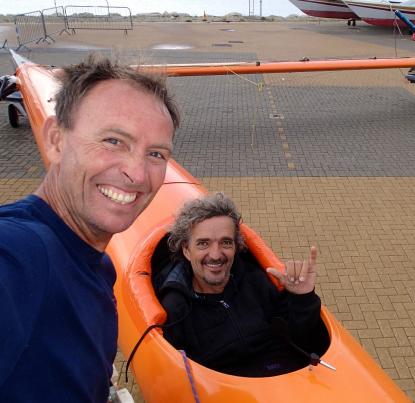 We have had long Skype discussions about foils and various concepts but never met in person. The thought of having him present whilst doing a run was pretty tantalizing. Nonetheless it was great to see him and share some of our ideas. In fact, there was almost too much to talk about and I hope we get another longer chance to chat at leisure. It’s always a great pleasure for me to sit and hear the stories direct from those who did it. The inside personal perspective. The little details that only they remember. It needs to be the right environment and company for it to come out. I had the chance to sit on the end of an empty bar in Walvis Bay,2007 and listen to Finian Maynard tell me of his big day. Sailrocket 1 was still sub 40’s and crashing regularly. I remember walking home (well, to the container where we were sleeping) alone in the dark, strong wind. I stopped and stood in front of the silhouette of our first creation just buzzing and wondering if I would get the chance to share such a moment with some other dreamer one day.

Erik is designing, building, testing and competing with a host of foils which are trying to use similar concepts to those which we used i.e. base ventilation. He is also dealing a lot with cavitation and the various options for cross-overs. It’s a fascinating puzzle and definitely one worth tackling. I described how good our concept was at showing the nature of the problem. The huge amount of stability the Bernard Smith concept gave us allowed us, at times, to just pour raw power at the foils to see if we could bust through the drag and get a higher number. We only ever did once. 52 knots was our nemesis with up to 7 different foils, 2 boats and all conditions. Our first wedge foil managed to hit a peak of 54 knots once (with a WIRED journalist in the back). 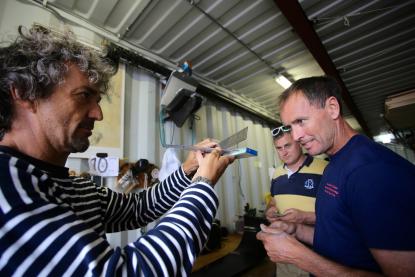 The point I’m making is that the drag becomes severe, the curve goes up hard. It’s a real barrier that needs different solutions. We knew we needed power and that’s why we liked the Bernard Smith concept. Whether or not the “surfers” (kite or wind) can make the foil concepts work for their applications remains to be seen. The thing is that you need to try… and be persistent. Often the solutions come from strange and unexpected places. Sometimes, it’s staring you right in the face but you’re looking straight through it only to laugh later when you realise. We don’t show many people our 65-knot foil. I showed Erik. I like the path he has chosen and the passion with which he is still tackling it. It’s inspiring. Good luck with the conditions in Luderitz, mate.

So Sailrocket and all the various Insurance companies were stood down. It was raining and the wing was left in the Hangar at the Academy. I rigged up the A-class in preparation for the lighter afternoon winds now forecast. I was desperate to go sailing on this wonderful new foiling toy. Malcolm was out sailing his latest back-yard creation and i was keen to play. There is still so much potential for this to be a great week for sailing… especially with so many amazing new dinghies coming out all making big speed claims. It’s what this week is all about. Moths, Phantoms, Nacras, A’s, Whispers, C-fly’s, kite-boards, i-flys, AC45’s… the south coast is full of them and yet they spread out almost avoiding each other. Surely this week could bring them together to line up, discuss,inspire, share and just enjoy each others company. Luca Rizzotti has done a great job with The Foiling Week so maybe he should join up with the long history of this event on these shores. The WPNSA and Portland Harbour provides a fantastic venue for all manner of craft. There’s not many places that could handle all the diversity speed-sailing has to offer.

At the end of play yesterday, there were two boats on the water, Malcolm’s and mine. We wove back and forth across Portland Harbour in the dramatic light enjoying our craft. The forecast we wanted for Sailrocket to run had truly not materialised but it was good enough for these two to play. I finally got in some good foiling runs on the A-class and just loved every second of it. I feel a lot more in control in Sailrocket at 50 knots than I do two feet high on an A-class at 18 or so knots. Yeah there’s a lot of fun still to be had way down the range.

So that’s it for now. if you want to sit in the hot-seat… then come down tomorrow. If you can’t make it then come to the NEC in Early November. If you want to sit in it… just ask. If you don’t ask, you don’t get:) Now, if you do sit in it, you can know this: If this thing you are sitting in, as she sits today, was fired off down the right course in the right wind…and you sheet that little white rope in to that little mark…there’s not a sailboat in the world that will even come close. She’s good to go.

Thanks to everyone who helped. It really is appreciated. That’s why we share it.

all about the pink