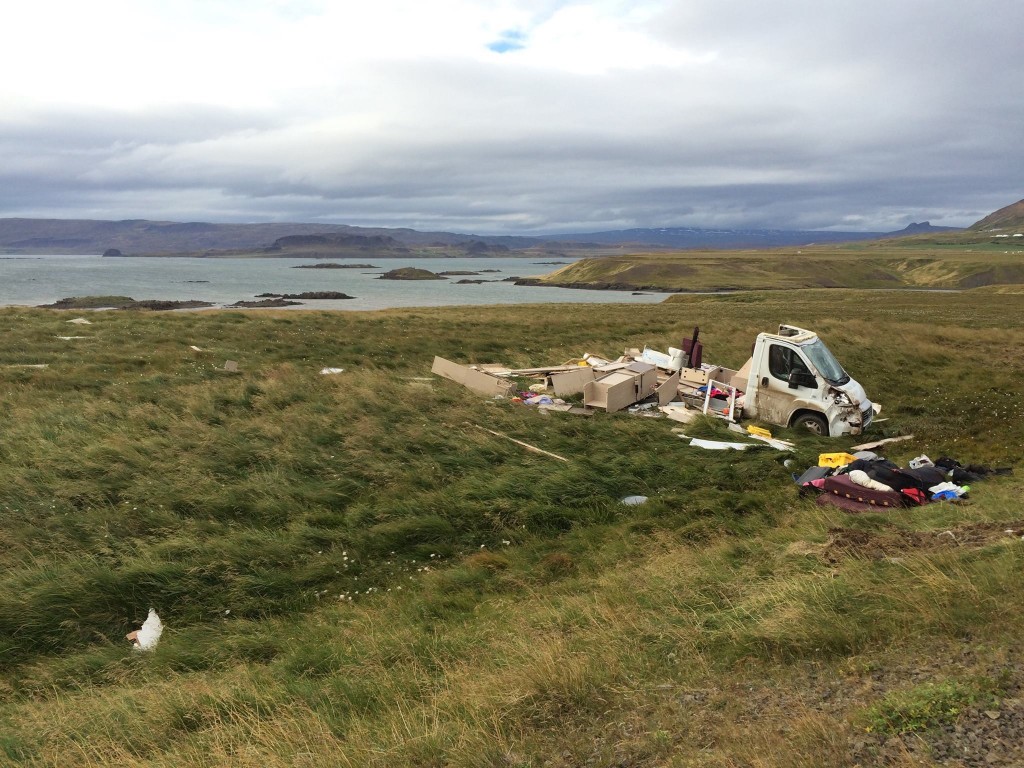 Pat Rynne’s Waterlust videos have brought some of the most beautiful parts of our sport to the world over the past few years, and we’re lucky to call him a friend and occasional co-conspirator.  Few understand just how far Pat goes to pursue his passion, but an incident last week puts it all into perspective.  Our thoughts go out to Pat’s partner Fiona (who just underwent surgery and is in recovery) and the rest of their injured crew. You can share your support over here.

Last Saturday while filming in Iceland, our amazing team of Fiona Graham, Laura Graham, Jennah Caster, Jenny Adler, Greg Owen and myself were involved in a motor vehicle accident. We were driving on a straight and paved road along the coast in the western part of the country and were hit by an extremely strong gust of wind deemed a ‘microburst.’ The force of the wind powerfully flipped our 6-person caravan off the road into a nearby marshland. We were driving slowly, at around 25mph at the time of the accident. We had been monitoring the weather throughout the morning and had not experienced winds that impaired our driving ability until this moment.

The camper did at least one full rotation and came to rest right side up off the road. The wind in this gust was blowing by my estimates in excess of 70 knots, tearing the camper structure off the frame of the car and blowing it out to sea. This is why the crash site appears like a high speed crash with such high levels of destruction. From what I can tell, the wind was accelerating through a small topographic feature that created the gust. I can’t be certain, this is just my assessment.

Immediately after the accident it was unclear who was injured and who wasn’t. For the first minutes we couldn’t find everybody amongst the debris. The details of what transpired over the next 30 minutes are not important, but in summary we determined that Greg had suffered a head laceration, Jenny had suffered a head injury, and Fiona had severely injured her back and was unable to move from the position she had landed when thrown from the vehicle. Laura, Jennah and myself escaped without substantial injury.

While waiting for an emergency response team to arrive, we stayed with Fiona and protected her from the swirling debris that were flying violently about the wreckage. It felt like we were in a Tornado. It took about 30 minutes for an ambulance to arrive and during this time it was unclear whether Fiona was bleeding internally. For all involved, these were the scariest moments of our lives as we thought we were losing her. An ambulance arrived and it was determined that Fiona needed to be emergency evacuated by Coast Guard helicopter to Reykjavik for immediate medical care. 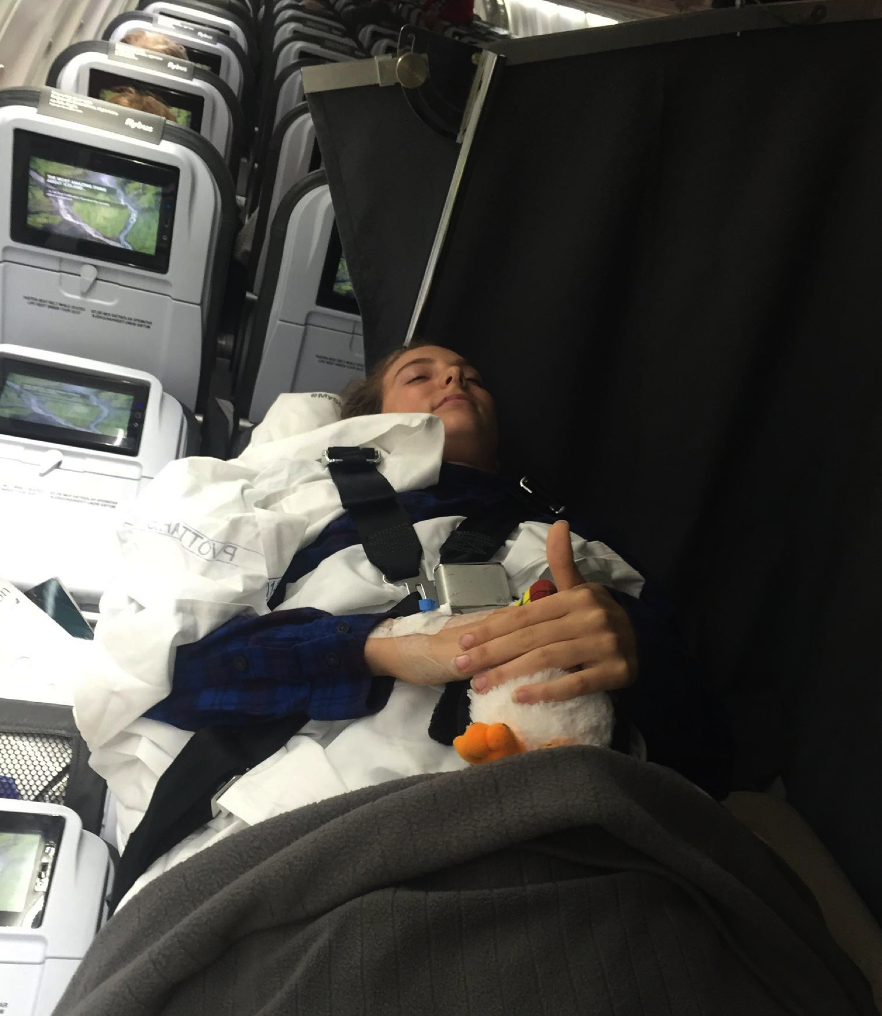 The Coast Guard crew arrived after another 30 minutes and performed a skilled landing in the extremely gusty wind nearby. I was able to accompany Fiona on the flight and she was incredibly brave. Once in Reykjavik Fiona was attended to by a large team of medical experts in the cities primary hospital. It was quickly determined that Fiona has fractured her Sacrum and partially crushed her Pelvis. The Sacrum is the bone that connects the spine to the pelvis. The nature of Fiona’s injury is that the fracture is unstable, meaning she cannot not move without further endangering her spinal chord and neurological functions. During this evaluation period it was determined that much of Fiona’s neurological function is in tact. She can move her legs, toes, etc. However, the unstable condition of her bones meant she was at constant risk of further injury.

From Saturday to Wednesday (yesterday) Fiona was immobilized flat on a bed while her condition stabilized in Iceland. During this time we sent her CT scans and X-Rays to family and friends in the United States for review. We were extremely lucky for her case to be forwarded to an expert team in Boston who all agreed that Fiona required immediate surgery to stabilize her bones. Unfortunately this surgery is so complex that few surgeons around that world can perform it, and the hospital in Iceland was not suitable to perform it.

During this time Laura and Jennah were absolute rockstars, helping Fiona manage her pain and organizing all the logistics related to recovering our property from the accident. Volunteers walked the accident site and found more or less all of our belongings. For scale of the wind, one man found some of our wallets and phones 700 meters downwind from the wreck.

After days of logistical planning we were able to secure Fiona a flight on a commercial flight to Boston yesterday. The airline was extremely helpful and essentially folded 9 seats down such that a stretcher could be fixed above it. During transit she could not be moved from a laying down position without risking her spinal chord. Every time we moved her from one stretcher to another was extremely painful for her, but she handled it with absolute poise and courage. We arrived last night in Boston and were met with an emergency medical crew to transport Fiona from Logan airport to Massachusetts General Hospital. This transport went incredibly smoothly despite arriving from a foreign country. We are incredibly thankful for everybody’s efforts in facilitating this.

We are currently in Mass General where Fiona is scheduled for surgery tomorrow (Friday). The surgery is complex but we have one of the best specialists for this injury in the world performing it. She will be given a variety of screws and plates to stabilize her sacrum and pelvis and provide her the stability she requires to recover. Fiona has been brave beyond words through all of this, but this final major hurdle is understandably very scary for her and all of us that love her.

I apologize for sharing this information in such a crude manner as Facebook. We didn’t want to communicate this to friends publicly until we knew the full extent of Fiona’s injuries and the path forward to her recovery. Our best case scenario is that she will make more or less a full recovery without any neurological damage. It’s unclear whether this will happen or not, but her early tests suggest it is possible and we’re happy and thankful to be in that position given the severity of the accident. As with everything so far, we will cross each bridge as we reach it. We are thankful for the strength and love from both the Graham and Rynne families and feel confident that we can tackle whatever lies ahead.

Fiona will be incapacitated for some time and will not be able to read texts or emails on her own for approximately a week, maybe more. I am happy to read your notes to her, so feel free to pass them onto me either in this message thread or via direct message to me or email ([email protected]). I won’t be answering phone calls from anybody besides family during this time because I need to stay focused on being with her, so please stick to email or Facebeook messages for now. Down the road I will be sure to connect with you all in person, by phone or through email once I have time. In the meanwhile, please be patient.

There is nobody else in the world that has more strength, budding positivity, or determination than Fiona. This is one of the many reasons we all love her so very much. I know she can fight through this and win, and we’re going to do whatever it takes to get there.