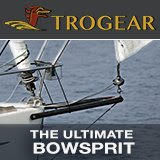 The charm in this case is Trogear Marine Products, the company I formed in 2014 to launch the aftermarket, carbon fiber bowsprit I conceived of and patented in 2012. The business went through two other iterations before Trogear came to be, but that’s a story I’ll get to later. Let me tell you about the genesis of the sprit first.

In 2012 I was living in LA with my boat in Marina Del Rey. I have sailed most of my life and had done a fair amount of buoy and coastal racing, both crewed and short-handed, before moving to SoCal from the SF Bay Area. Life finally allowed me more time to invest in my passion, so I joined the Pacific Single Handed Sailors Association (PSSA), a great sailing club for short-handed sailors, and entered the race series. Well, I was getting whooped! The challenge was on! I started in on trying to improve my boat for light wind single-handed sailing.

The list of needed improvements was pretty long, with much focus on close reaching and running where I was not at all competitive. An avid race spectator as well, I noticed that the Volvo Ocean Racers were all using bowsprits with furling sails. It was clear that both deploying sails and jibing was greatly simplified, therefore faster, and was a vastly superior experience to using a spinnaker pole. A bowsprit was a non-negotiable next step towards faster and easier sailing.

An exhaustive search of available aftermarket solutions left me empty handed. Not only would none fit my specific boat configuration, but I wasn’t thrilled with their designs either. Time to put my engineering background to work on creating my own sprit. The initial design criteria was that it needed to be robust, light, not cluttering the deck and good looking. During the design phase it was apparent that a bowsprit with a triangular structure could be attached to the bow via a movable hinge. This solved several issues such as allowing the bowsprit to be positioned upright when not in use or when attaching sails or a furler. Also, when the sail was deployed, I could adjust the luff tension by lowering or raising the sprit head, possible by using an adjustable length bobstay leading to the cockpit.

I built a carbon fiber proof of concept, which wasn’t the best looking, but it did work. Since my boat can’t use overlapping headsails, I had a Code 0 made and used it with a Karver furler on my first sail with the new sprit. The boat really woke up, handling beautifully in light wind close reaching with the boat speed exceeding AWS. Yes, heads were turning and sailors were asking where they could buy one, so I started my first company named Figure 8 to put it on the market. However, a few months later in 2013, during a trip with a fellow PSSA member to watch the America’s Cup finals in SF he asked if I would like a business partner. The guy is a very good sailor with an Australian accent. A winning combination, I thought! Figure 8 was now Draken Marine Products, though after less than a year, and a few weeks before product launch, he pulled out. At this stage, knowing that the bowsprit worked even better than I hoped for, Trogear Marine Products (named after the beautiful town of Trogir on the coast of the Adriatic sea) was born.

Yes, third time a charm. Finally, I am able to share the Trogear A-Sprit with other sailors who want a safer, easier and better sailing experience all around. Visit my website or call me with any questions. I love to talk sailing and help fellow sailors have a better experience on the water.