stand by to stand by 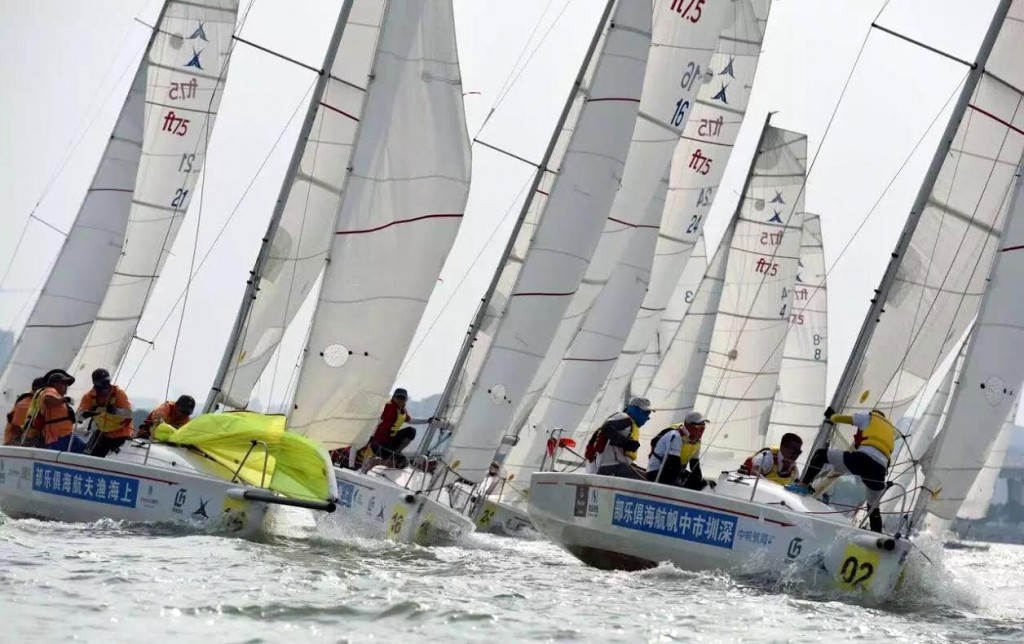 If the first two days of the China Club Challenge Match Qualifiers had been frustrating then the final day took things to a new level with an overcast sky making the arrival of the sea breeze less likely.

After waiting for the wind to settle, well what there was of it the PRO set things in motion only to have to give 3 toots at the first attempt. Second time around the fleet were a little better behaved and off they went with the wind seekers in the fleet at a distinct advantage.

The breeze steadily clocked left to the extent that the ideal world would have produced a course change but with the wide spread of experience in the fleet the back markers were still on leg one as the leaders rounded the bottom mark. In fact the breeze went round to such an extent there were boats on opposing legs with gennikers up. The fickle breeze then started to die leaving most of the fleet drifting on the tide with only the first 7 boats of the 30 boat fleet recording a finish. These 7 were however, the usual suspects.

Then the big man upstairs decided to switch off the wind entirely leaving the fleet drifting back and forth hopefully. The organiser’s RIB buzzed back and forward with the lunch boxes but that was the highlight in the middle of the day.

As the 1500 deadline for the last warning signal approached a few dark patches started to appear and coalesce so marks were dropped in the water again and a sequence entered. A combination of a windward going flood tide, light breeze and over eager fleet produced a general recall followed by yet another and with just 15 minutes to go to the cut off the 4 minute signal heralded the first black flag of the regatta to audible groans from the fleet. It didn’t stop all the pushers with 7 boats having their race ended by the umpire as they approached the top mark.

The rather got out of jail however as the wind had only been playing with the event and started to shut down and a move, firstly to an ‘S’ flag by the race committee and with only 2 boats likely to finish, leaving 28 DNF’s, reluctantly there was no option but to give 3 sound signals and raise the abandonment flag.

The regatta concluded with the podium being filled by 1: Old Boys Dream Team, 2: Sea Blue and       3: Hero Racing Team

So, 185 competitors, 30 boats, 8 nations and 8 races run in what were challenging conditions for competitors and organisers alike, the 11th China Club Challenge Match once again grew a little in quality and reach.

The top 16 teams return to Xiamen in 6 weeks for the second half of the event, the Match Racing. Slightly different skills, slightly different rules, on past record significantly more combative and with the initial seeding determined by their final positions. The umpire team of Rountree (NZL), Boberg (NZL), Skinner (GBR) and Sakai (GBR) return to police the teams who already know that they won’t get away with anything untoward as long as they remember that ‘no flag, no foul’ and with only 2 boats at a time to observe there will be even less chance of escaping their gaze.

All back to Xiamen in November. – SS.