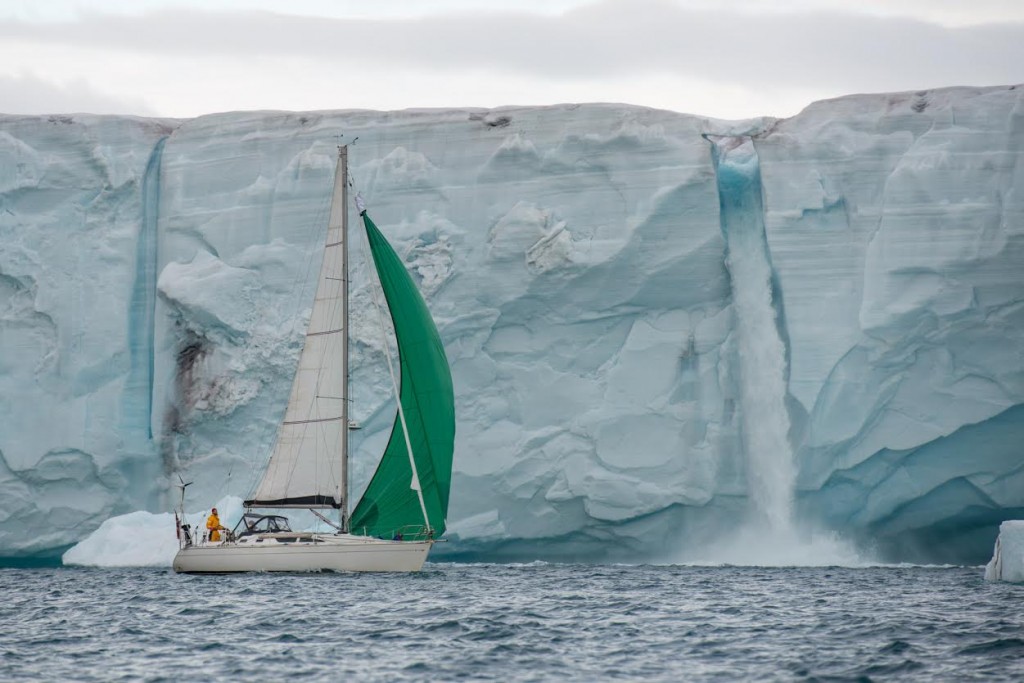 Epic sailing, fending off polar bears, pods of whales, colonies of walrus, arctic scuba diving, paragliding off Norwegian cliffs and more.  The crew of the international expedition team ‘Barba’ recently completed a successful circumnavigation around the Arctic Island of Svalbard, north of Norway, on a sailing adventure to explore the great North equipped and sponsored by Ullman Sails.  Their journey took them 3,400 miles up the Norwegian coast into some of the highest latitudes accessible by boats.  Andreas, the captain of ‘Barba’, discusses sailing into a world hardly touched by man.

Q: Tell us about your latest expedition to the Arctic Svalbard Archipelago.

A: We have just returned to mainland Norway following a 10-week sailing expedition to and around Svalbard. Svalbard, a group of islands that stretch from 76 to 80 degrees latitude north, has all the ingredients for a classic Arctic adventure: glaciers, sea ice, unpredictable weather, strong ocean currents and a fauna that includes whales, walrus and, most importantly, polar bears. The crew of ‘Barba’ is made up of five people from four nations including Norway, USA, Russia and Germany.  Our interactions, the camaraderie that arose from being isolated for weeks at sea, and the mutual trust required for staying afloat only added to the adventure.

Our goal was to sail as far as the sea ice would permit. We pushed north until we reached the pack ice of the North Pole itself. At the 81st parallel north, above the Svalbard archipelago, we were surrounded by ice floes and unable to go any further. We did all this aboard a Jeanneau Sun Fast 37, a fiberglass boat designed for sailing in the Mediterranean. It was not ideal for the task, but the best boat is always the boat you have.  The relatively fragile vessel pushed the crew to the limits, but through careful navigation, thorough research and a good understanding of the weather we managed to carry out the expedition in a way we deemed safe. Highlights of the expedition included diving (yes, scuba diving) at 81 degrees north, beautiful sailing, polar bear encounters, anchoring next to a walrus colony, and an Arctic char fishing bonanza. 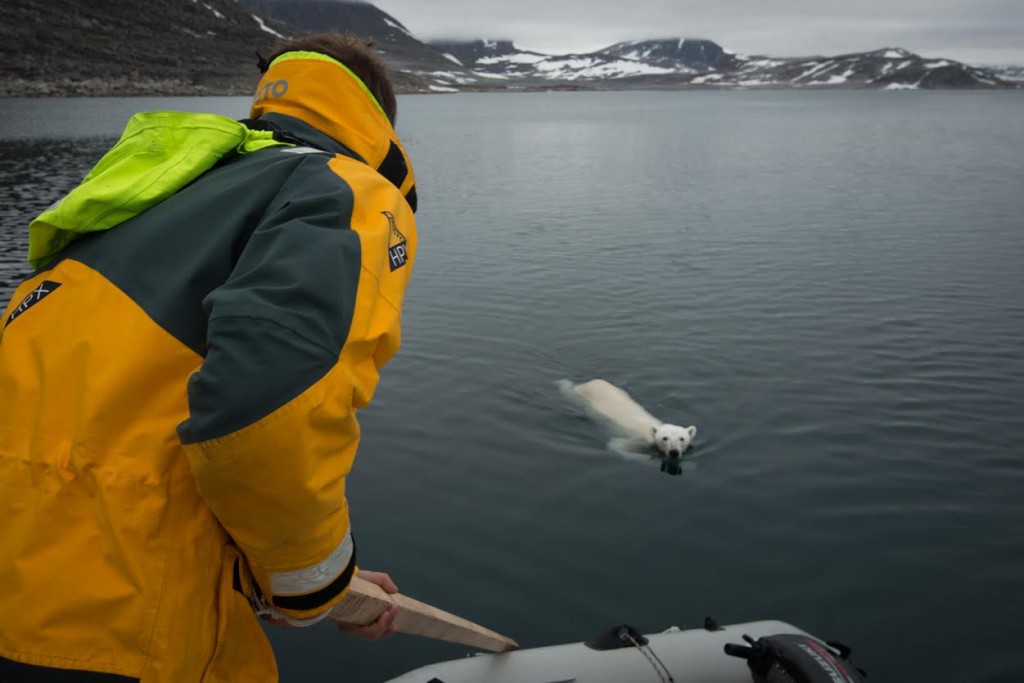 Q: While sailing to and around Svalbard the crew saw an immense amount of wildlife.  What did you do about the dangers of the polar bears and what were the precautions you took to ensure you were safe? What were your encounters like?

A: Polar bears are a real threat in Svalbard with human casualties every couple of years. There is good information online that you will find when you apply for the Svalbard sailing permit. Understanding bear behavior, staying constantly on alert and having the right tools should you find yourself in harm’s way is crucial. The first thing to do if you see a bear is to walk away, if possible. Should it display threatening behavior, you can scare it off with loud metallic noises, flash bangs or flare guns. Some of our crew had experience hunting since an early age and were familiar with how to use the rifles that we carried with us.  However, having to shoot a polar bear is a sign of poor assessment ability and a defeat for anyone venturing up north.

The times we saw the bears, six times in total, occurred when we were not looking for them. They would appear out of nowhere, they are truly masters at stalking prey. The most interesting interaction was with a bear that swam up to the boat early one morning as we were pulling up the anchor. We scared him off shouting in four different languages, making loud noises and finally splashing in the water with our wooden stick intended for pushing ice. We had the stronger tools lined up, but fortunately never had to use them. The bear spent about 15 minutes trying to get to the boat and there is no doubt he would have climbed onboard had we not scared him off.

Q: What brought you to high latitude expedition sailing?  What keeps you coming back?

A: I got into sailing rather late in life, back in 2009 when I was 29. It all started with buying a 37-foot Jeanneau charter vessel in England. With the Norwegian archipelago and changing seasons as a perfect training ground I spent all my available time out there, winter as well as summer. The following year we sailed her to Greenland and from then on there was no looking back. The sailboat was the ideal platform for combining a range of activities such as diving, paragliding, skiing, climbing and interacting with nature.

First and foremost, sailing is a hugely complex sport that will continue to challenge and fascinate me until the end of my days. In addition to the technical aspects of sailing you have to master a wide range of skills such as marine engines, communications, electronics, weather, currents, anchoring and gear repair. I grew up just next to the ocean in Norway, free diving since the age of seven; I got my first boat at the age of nine. Later, I went on to work in the Norwegian Navy for two years as a diver and parachutist, followed by an education as a marine biologist. My maritime background and experience all ties in with the huge range of knowledge required for venturing into the high latitudes. Finally, and perhaps most importantly, I appreciate the human interactions and relationships required for doing what we do on ‘Barba’. I spend a lot of time talking to fishermen, scientists and captains on ice-going vessels to better understand the environment into which we venture.

Q: Where is the next sailing adventure?  What is the next challenge for ‘Barba’ to undertake?

A: We are still sailing home from Svalbard right now, going along the spectacular Norwegian coast. As for our next trip, subject to finance and finding the right crew for the task, the plan is to sail back up the Norwegian coast in January. The goal would be to spend 4 to 6 weeks in Vesterålen, close to Lofoten in Northern Norway, diving and interacting with the orcas that number into the thousands here during this time of the year when they prey on the overwintering herring. Sailing ‘Barba’ will be the ideal way to following their migration. Norway is one of the only places in the world where you can legally snorkel with wild orcas – the closest I have been to an orca underwater is about 3 meters.

I am currently looking for a sailor with an appetite for sailing in snow blizzards and rough seas, as well as an underwater photographer and multi-purpose adventurer to join me for that expedition. We would then sail back south along the Norwegian coast in February and March with the goal of skiing and paragliding from some of the 1000m mountains that rise straight up from the ocean. For next summer I am working on sailing to the Russian Arctic, another expedition that will stretch the capacity of ‘Barba’ and push her crew to their limits.

Competent crew for the expeditions is always a scarce resource, and I would be interested in hearing from readers of Sailing Anarchy, who are encouraged to contact us via our webpage www.Barba.no

To learn more about the ‘Barba’ crew and their recent expedition check out their website at www.barba.no. Photos by Daniel Hug. If you have a question for the ‘Barba’ crew or any of the other experts over at Ullman Sails about anything sails from design and construction to boat handling and tactics, send them to the Ed and I will choose the best to forward on!

game plan? there is no game plan