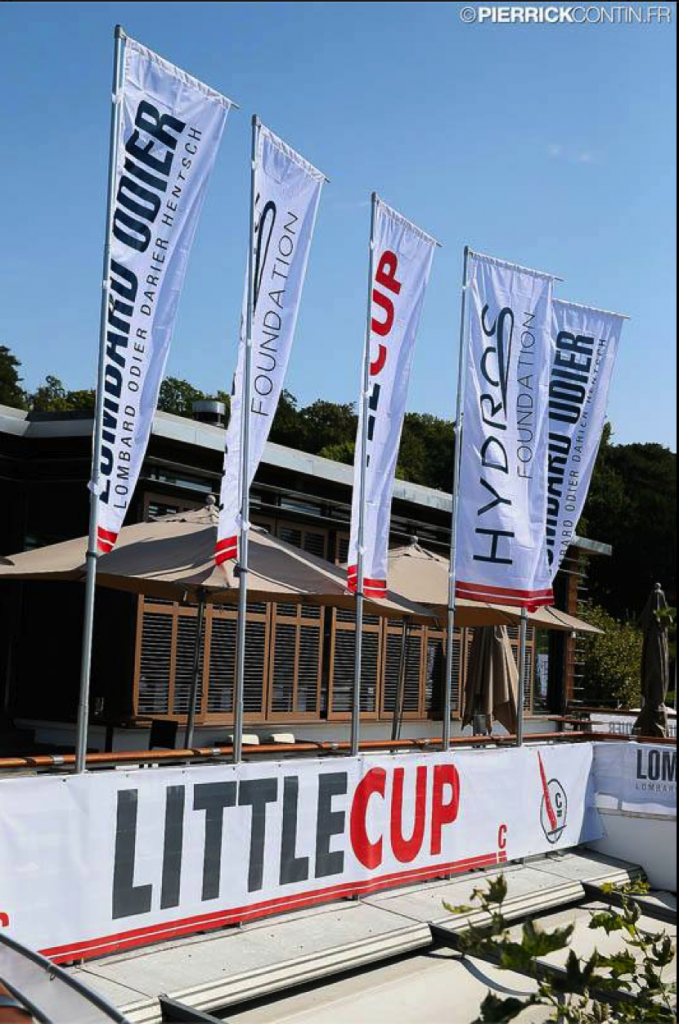 Conflicts and family requirements mean that Sailing Anarchy will miss the C-Class Catamaran Championship for the first time in a long time, and we’re sorry to say that, unless something huge changes, our absence means the live On-The-Water Anarchy coverage you came to depend on in both Newport (’10) and Falmouth (’13).  Fortunately, there are plenty of long time Anarchists racing their high-tech cats in the event, and the student-run Rafale Project team takes a break from setup for the Little America’s Cup in Lake Geneva to send in this report from the paddock.

So far it’s been a lot of very long days leaving our house at the crack of dawn, to avoid the Geneva traffic, and leaving SNG well past sunset most days! But it’s been a real blast for everyone in the team. It has also been fun reconnecting with old friends and making new ones.

Personally I have been humbled by the welcome we have received from the Hydros foundation team, the people at SNG and all the other competitors. It reminded me again why I love this class so much and why I keep wanting to get back into it despite the stupendous effort it takes to get there.  The fact that one of the foil specialist from the Groupama team took time out of his busy day to come and see us, give us some advice and lend us some of their equipment to improve our foils is a testament to the spirit of the class that unites us.

The buzz around the Little Cup village definitely helps getting through the day. Everyone is helping everyone and sharing tools, exchanging advice, knowledge or even helping each other launch and retrieve the boats.  But our arrival here has also been the time for a serious reality check! It took us a couple of days to prep Rafale for our first day out.  There was still a big job list left from our last sail in Montreal. Yesterday we spent 4 hours on the water in light wind. Upwind performance looked not too bad, but Marc and Trevor were really struggling to find the right mode downwind.  We learnt a lot from out first sail though, and clearly we still had a lot of work to do!!!

Then came our second reality check in the form of Franck Cammas’ green missile. There is no other word for it! I don’t think I’ve ever seen a C class going this fast, let alone in this kind of wind conditions. I admit it was a bit demoralising for everyone, I think especially for our sailing team.  But that only lasted for a short while. As usual, the team picked itself up and carried on. Today as every other team went out in even lighter conditions we focused on improving the boat. As I write this, back at HQ, I feel quite confident we have made some drastic improvements. We completed most of our rework on the hydrofoils and rudders, reviewed our control system, changed the setup of our element 2 morphing tab and cleaned up the rest of the wing aero. The latter 2 items should drastically increase our downwind performance. There has been little time to look at other boats and gauge the competition. Still there are lots of interesting designs and ideas. I will have to try and post some pics of some of these.

Team Norgador has some nice improvements to the Hydros boat they are chartering. They have bigger version of a moth ride height control that looks pretty neat. And I do like their end plate. It’s really clever! This would have my vote vs. End-plating to the tramp… These guys deserve a lot of credit for putting this effort together is such a short period and with such limited resources!  Sentient Blue / former Alpha is looking as good as ever in the hands of its new team. Will be interesting to see how they fare if the conditions are light!

Cogito looks nice too in the Axon racing paddock. Iast time I saw her wing, it was in bits on the NYYC lawn after the Steve’s unfortunate capzise. But she looks great now with the wing rebuilt! What an amazing piece of C class history! Who knows how the team’s local knowledge will play out.
I haven’t had a chance to look at Steve’s boat in details yet. I’m very intrigued to find out the details of their setup. It’s exciting to see something radical pop up!

As for Groupama, well their deck looks more like a fighter jet cockpit than a C-Class! I’ve never seen so many control lines and indicators in such a small space! I hope Franck likes spaghetti!!! I kind of wonder whether they will be rigging missile pods on the wing tomorrow or canons on their foils!!! More seriously though they are clearly not taking things for granted and they have been working as much as everyone else to prepare their boat. I’ve seen a few different foils being tested back to back…

The last team, Team Gstaad yacht Club has been a bit conspicuous by their absence… Their tent is being used as the scrutineering bay so no space for them yet. But I kind of wonder whether they will arrive with some surprise tech on their Hydros boat.  Anyway this is going to be a fun race come Monday!
In the meantime we have a lot of work to get Rafale ready, and hopefully tomorrow we can line up with some of the other boats to see how our improvements look.