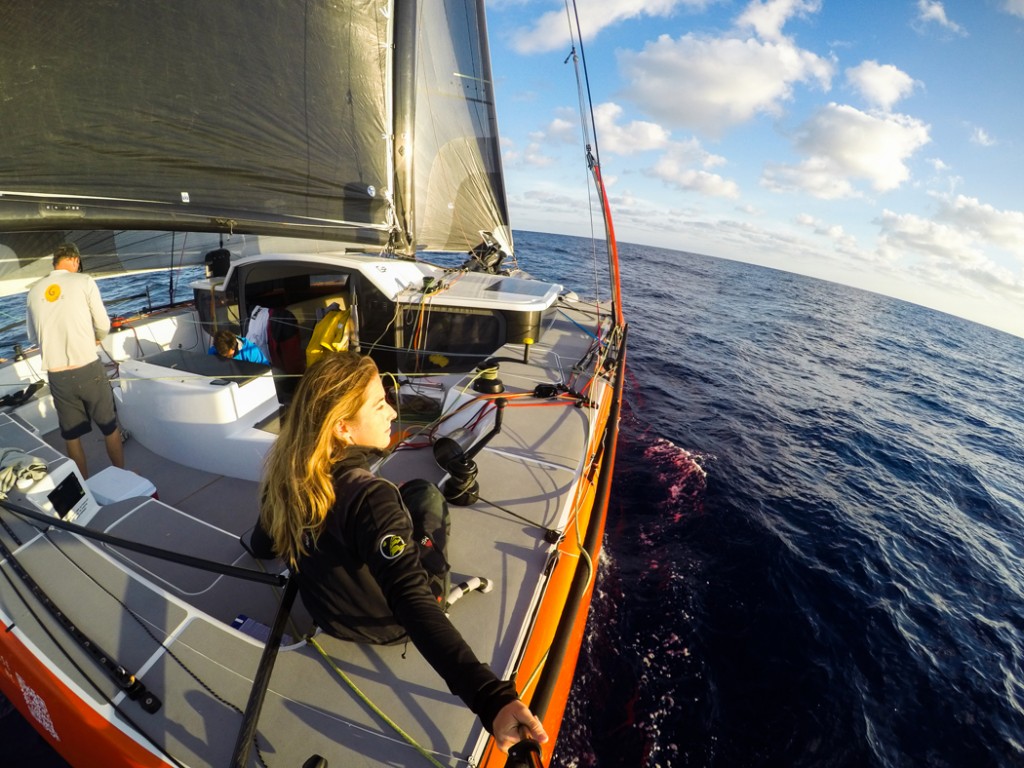 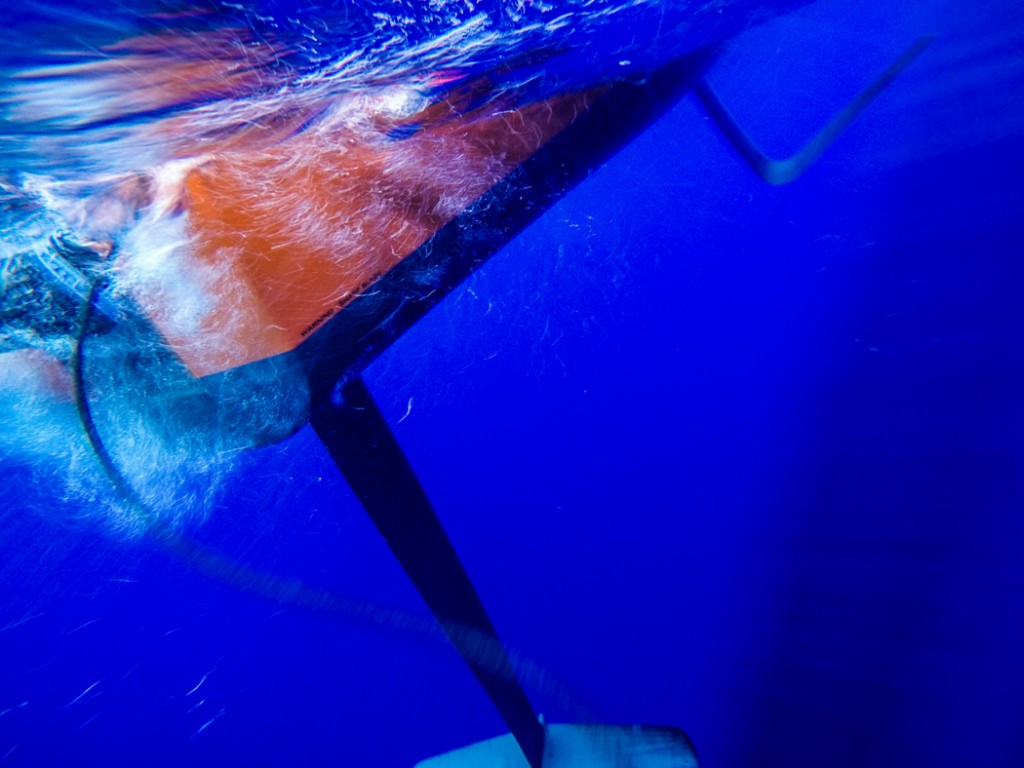 The best watches were typically sitting on 14-22 knots. Shannon would perch up at the helm with various gourmet snacks, euro-techno blaring, and hitting speeds at up to 25 knots. A two time winner of the America’s Cup, he has an almost incessant need to push.  We all had tremendous confidence in his ability to multi-task while foiling at 25 knots, even in the dark.

The most challenging night was beam-on seas and breeze with gusts into the 30’s. We sailed with two reefs in the main and a reefed solent. The G4 handled brilliantly, albeit a bit wet. When cells of breeze rolled through, we’d simply bear off 20-30 degrees and let her unleash into the high teens. It was a wet and somewhat rough evening.

By the end of the passage, we all felt calm and at home sitting on speeds in the high teens.  Eating, sleeping, walking around at this speed became normal.  We had two days where we clocked between 350 and 400 miles – in cruising mode.  “These are seriously big numbers,” Peter said to me.  “This really may be the ultimate coastal cruiser for the performance set, easily sailed by 1-2 people.”

“There’s an inherent thing about speed and adrenaline and when you add it into an uncontrollable environment like the ocean, says Shannon. “All that foiling does is make you want to go sailing! Life has gotten so fast paced that people want to go cruising at 5 knots, but to have the option to up the ante to 25 on the G4 is something special.”

Peter is, as usual, full of vision. “The goal has always been to develop a coastal cruiser/racer that people like us, who get their performance fix from multihulls, kiteboards, racing yachts, or other waterborne activities, can handle with our families,” he told me.  “We wanted Formula 40 speed with shorthanding ability, and during the development process, it became clear that foiling and flying would definitely be possible and an added benefit for our target audience. With hindsight, the foiling is absolutely brilliant.”

Peter said that the G4 can be pushed so much harder than any forty-foot performance cat, and the numbers bear it out: A F40 would top out at 23 knots, the original AC45 would top out at 27 knots, and beyond that, a pitchpole.  The G4 has already been over 31 knots, and has plenty more to offer in speed. In summary, the foils take the G4 concept to a another level. 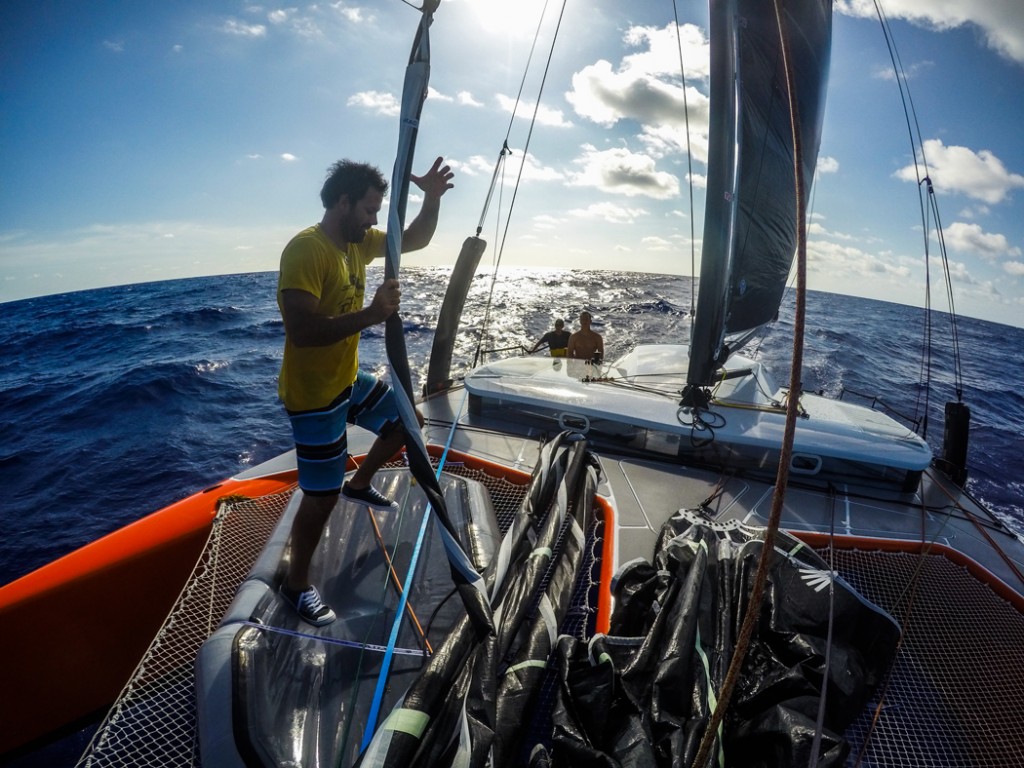 Shannon thought the concept worked best in the sense that you have something that can smoke so many things on a performance level yet you can really cruise it.  “For me this is a weekend sailor, but it opens up your range for that weekend with the miles that it can eat up,” he said. “Like the original Gunboat, the G4 opens up a new door to how cruising can be perceived.”

“It’s not just about the boat, it’s about the concept of foiling in general, explains Shannon. “When people experience it, you don’t have to convince them of anything.”  As a guy with a big family and hundreds of young local island fans, he’s clearly excited about what it means for the future.  He preached to me: “Everything that’s happening in our sport will make it more accessible, kids will have more fun sailing than opti-training, and sailors who appreciate progression will rekindle their passion for sailing. People who have sailed their whole life will be blown away by it and people who have never sailed before will say ‘holy shit why has it taken so long?!'”

I’ve said “Holy Shit!” numerous times over the past couple of months – from going bow down into a wave while foiling on a GC32, nearly getting sliced in half by Moths while shooting under water, and helming a foiling cat offshore, and I hope I never have to stop saying it.  And with the wave of exciting developments in innovation and design – and in how those innovations are being shared with the young people who are the future of the sport by folks embracing and nurturing their passions – It’s hard not to be excited.

friggin in the riggin