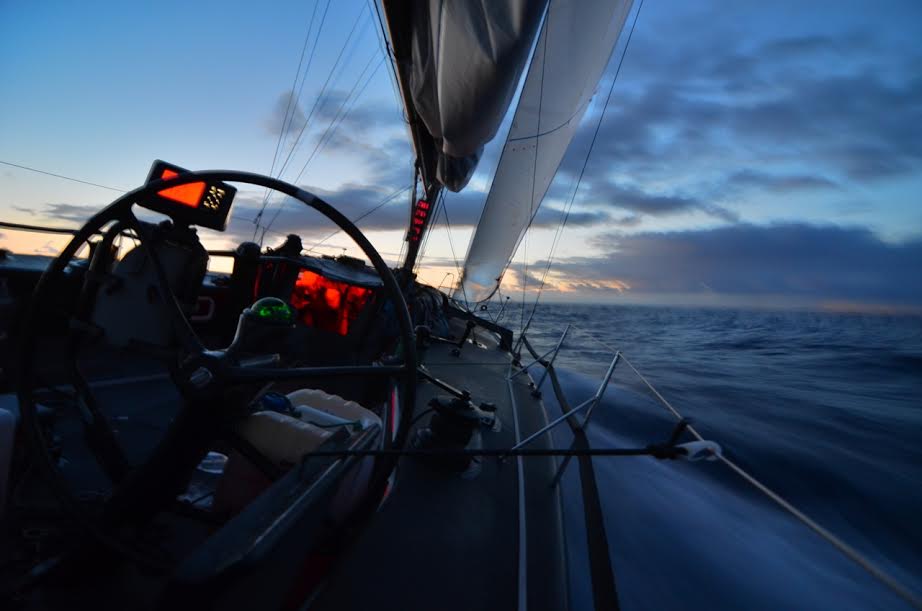 If you followed the Transpac this year, then you probably read some of the many shocking reports of trash and (mostly) plastic debris scattered along the race course. Between the Japanese tsunami of 2011, the North Pacific gyre’s unfortunate position in a dominant high between earth’s two largest economies and a couple of el niño-influenced tropical storms driving the fleet north, 2015’s Transpac created a perfect storm scenario of a large racing fleet sending it hard through the world’s largest man-made minefield of horrors. Divisions were almost surely won or lost as a result of how many times one boat had to back down off of rubbish and nets vs. another boat, with a number of sailors such as Rio 100’s Gavin Brady urgently blogging about the severity of the problem in an effort to raise awareness, “I’ve never seen anything like it…. this is a great tragedy to have so much garbage out there. We’ve got to as racing sailors let everyone know about this, because otherwise no one would believe it.” Sobering words from the globe-trotting Kiwi.

Though a morbid thing to be stoked about, the numerous reports of rubbish in the ocean and this hurricane-induced, north-is-best Transpac year is fortuitously timed with Dutch wunderkind Boyan Slat’s Ocean Cleanup: Mega Expedition project which is just now coming to a close. Sending a fleet of nearly 30 boats into the Great Pacific Garbage Patch to trawl for water and plastic samples while also recording visual surveys into an intuitive smartphone app, the fleet consisted of returning Transpac racing boats, cruising boats and a 171-foot research vessel. With a goal of creating the most comprehensive map of the Great Pacific Garbage Patch ever assembled, Slat and his team broke the ocean down into a grid and mapped anticipated routes for the fleet to sail – both east bound and west bound – to strategically sample and map the most affected area, which many estimates put at twice the size of Texas. 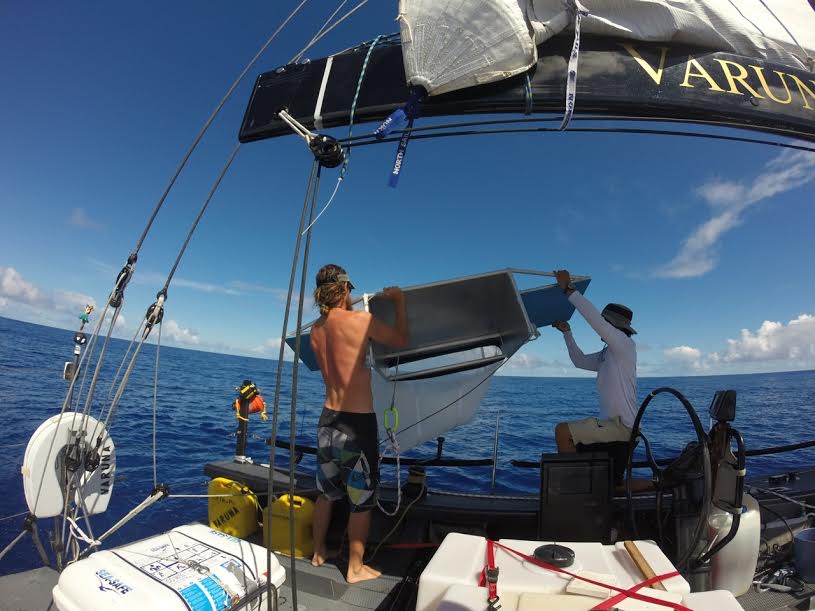 I was the delivery skipper of Chris Hemans’ Newport Beach-based Rogers 46 Varuna for the delivery to San Francsisco, and with three other crew left Hawaii a few weeks ago to sail back across the Pacific while also participating in the Mega Expedition project. While the representatives and volunteers present from the Dutch non-profit The Ocean Cleanup were very accommodating and a true pleasure to work with, their presentation and training seminar at Hawaii Yacht Club was as polished as your average J24 and left many skippers and crews looking at their awkwardly-shaped and bulky “manta trawl” research devices with apathy and resentment instead of optimism and enthusiasm for being part of a higher cause. Attrition was a result. “Weeds out the wankers,” we concluded. Varuna was all in and set sail.

Lifted by a huge shift before running into calm conditions, Varuna made her turn from north to east at about 37° north latitude about five days out from Hawaii. “Entering the box” where The Ocean Cleanup wanted us to begin conducting research near 154 W by 37N – in it’s northwestern quadrant – we managed to get off four one-hour trawls in ideal glassy calm conditions, with the preferred speed being a mellow 3.9 knots. At that speed, everything worked perfectly, the boat seemed quite happy and our manta trawl ‘Steve’, named in honor of a crew member who had to bail last minute bobbed up and down to port of Varuna’s wake. From a distance, Steve closely resembled a dismasted foiling beach cat with wings getting up and off of the foils repeatedly. I will admit to looking at the manta trawl for a pretty long time under the blazing sun before coming to that conclusion, however. 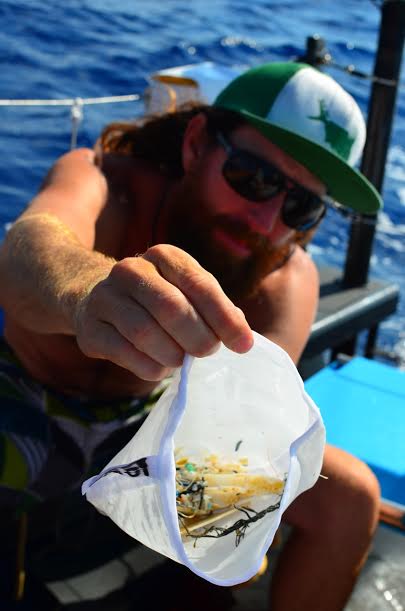 When towing ‘Steve’, we also began conducting the visual surveys as requested by The Ocean Cleanup. Holy shit. There’s a lot more trash out there than any of us had realized. This is my fifth return trip from the islands and tenth overall crossing in the past few years, so I thought I had all the trash before. Visually disabled from a war injury and usually sending it as fast as possible, well away from the Pacific High, I had become jaded in my experiences at sea – and with my vision – had failed to look closely and truly recognize how much plastic there actually is in the ocean. In the presence of two ocean crossing first-timers on board that were shocked to see the amount of plastic in the water and a speed that was reduced to just 3 or 4 knots, it was eye-opening to say the least at just how much plastic there is covering great swaths of ocean. We hit and backed down off of two nets, hit two fishing floats, nearly hit a large mooring ball with a 6-foot pole aimed at our headsail, made evasive maneuvers to avoid debris and more.

At 37 north we were nowhere near the center, which is in theory much more contaminated, yet there was plastic literally everywhere we looked. One must only briefly research how plastics, chemicals, heavy metals and other toxins work their way up the food chain to make the dangers of over-polluted waters hit home. In a wasteland where plastic is widely reported to outnumber plankton – the basis of marine life – by 36 to 1 and getting higher, Boyan Slat of The Ocean Cleanup helps articulate the urgency for the project, “The vast majority of the plastic in the garbage patch is currently locked up in large pieces of debris, but UV light is breaking it down into much more dangerous microplastics, vastly increasing the amount of microplastics over the next few decades if we don’t clean it up. It really is a ticking time bomb.”

The high compressed a bit and moved west as we moved east, putting us back in breeze and headed towards the coast sooner than we had planned and hoped for, meaning that it was sails (and boat speed) back up into the 8-9 range, making it harder to both spot rubbish and particulate, not to mention it was significantly harder to both deploy and retrieve, as well as tow Steve in a sea way. Despite the challenge, we got off two more trawls one calm morning and one more the next before we began approaching the coast in rapid fashion. The number of trawls, 7, was far less than what we had hoped for, but we felt good about our effort and confident that our research was good data and in accordance with the guidelines. Upon our arrival in San Francisco, we met with now-local Dutch sailor Ella van Gool, who has been volunteering locally to help The Ocean Cleanup’s efforts in the Bay Area. Out at sea, we had no idea how the project was going, but were stoked to learn from Ella that most boats participating have been making the effort and actually collecting good data!

On Sunday, the fleet’s 171-foot flagship research vessel, the Ocean Starr arrived in San Francisco to a hero’s welcome. With a race/ research boat escort by both Varuna and the TP 52 Patches to San Francisco’s Pier 30/32, the Ocean Starr was met with a hero’s welcome including international press from Australia, New Zealand, Europe and all over the US. Boyan Slat and researcher Julia Reisser both spoke at the arrival event while press, supporters and spectators were allowed to tour the research vessel which returned from a month at sea with an even bigger haul of trash and more dense samples than expected. A simple Google search for “the Ocean Cleanup” reveals that Boyan Slat’s project and his goals are being spread near and far and his message is getting out there. 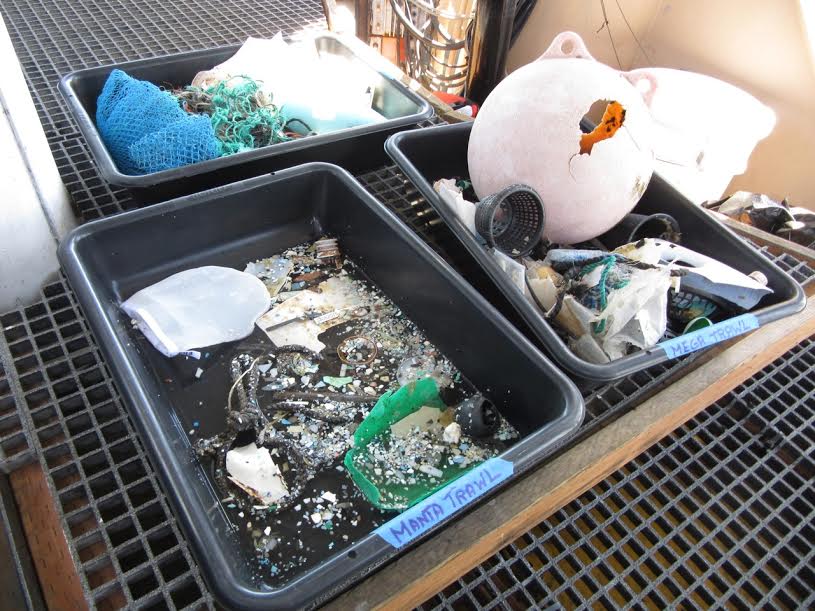 That message – so far – is again a sobering one, though one which needs to be heard: there appears to be even more plastic in the ocean than originally feared and predicted. I know that was the case on Varuna. Statistically, many will immediately doubt the findings and make semi-retarted yet serious claims that because they can throw a snow ball on a floor and can’t walk across a mythical island of trash that nothing’s wrong. But when 97% of the science community, world leaders and even the world’s most prominent religious figures begin bringing environmental issues to the forefront of the global and national debate, the momentum behind recognizing the issues that we face as a global community becomes too great to ignore and legislative change will have to occur. With the single most important global summit on climate change to ever take place just three months away in Paris – where world leaders will attempt to create a legally binding and universal agreement on climate – research like the Ocean Cleanup’s and other good data comes at a critical time in our history. Coming full circle to include Transpac boats to help map the Garbage Patch that was discovered by Transpac return sailor Charles J. Moore some 18 years ago, this year’s Mega Expedition was a unique opportunity where the good fortune of being a sailor could potentially help benefit the ocean that we all claim to love.

With support from Salesforce CEO Marc Benioff, Bill and Melinda Gates, the Dutch Government, crowd-funding and more – not to mention a now global media following – the Ocean Cleanup is surging forward on a wave of momentum and support. Next year off the coast of Japan, a large v-shaped boom will be anchored to the sea bed and deployed as a prototype to allow the ocean’s currents to push water through the v, collecting all of the rubbish on the surface and removing it using barges for off-site disposal. A year later, GPS trackers will be deployed to precise locations – likely by more Transpac boats – to better understand how the currents and the Gyre in the North Pacific work, ahead of a planned 2020 deployment of a full-scale trash collecting device which is envisioned to work as the Japanese prototype will.

I may not speak for all sailors, but I know I speak for many when I say thank you Ocean Cleanup for taking the initiative to help clean the waters that we sail, surf in, eat from and live near. You shouldn’t have to do it from halfway around the world, but we’re all very grateful that you are. And a hearty thank you to my incredible crew Adrian Johnson, Walt Kotecki, Jenny Guzik and boat owner Chris Hemans for what was a fantastic experience, both delivering and ocean researching. You guys all rock. Thanks to these guys for providing today’s title inspiration.