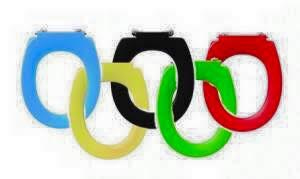 Yet another article lamenting the untenable water situation in Rio. Note the highlighted paragraph at the bottom. Does anything encapsulate the lies, deception, and arrogance of the “officials” better than this?

Canada’s top sailors are taking extraordinary measures to avoid contamination from the polluted waters of Rio de Janeiro during a test event there this week.”It is a major concern, and we have already seen athletes from other teams getting sick,” national team coach Steve Mitchell told CBC Sports.

“Our daily precautions involve only drinking bottled water; hosing down head, ears, nose and face after sailing, and keeping your mouth shut when in the marina or in the harbour,” Mitchell said.

Members of the Canadian coaching staff are also using hand sanitizer in their boat when handling lines that are in the water when in the harbour. The steps are unusual. But Rio’s pollution has been in the spotlight since an independent five-month analysis by The Associated Press published July 30 showed dangerously high levels of viruses from human sewage at all Rio Olympic water venues.

Under growing pressure, Rio state officials are employing stop-gap measures to retrieve floating rubbish from the bay, track detritus from helicopters, and step up bacteria-only monitoring. Local organizers and the International Olympic Committee have rejected moving rowing and sailing to cleaner venues.