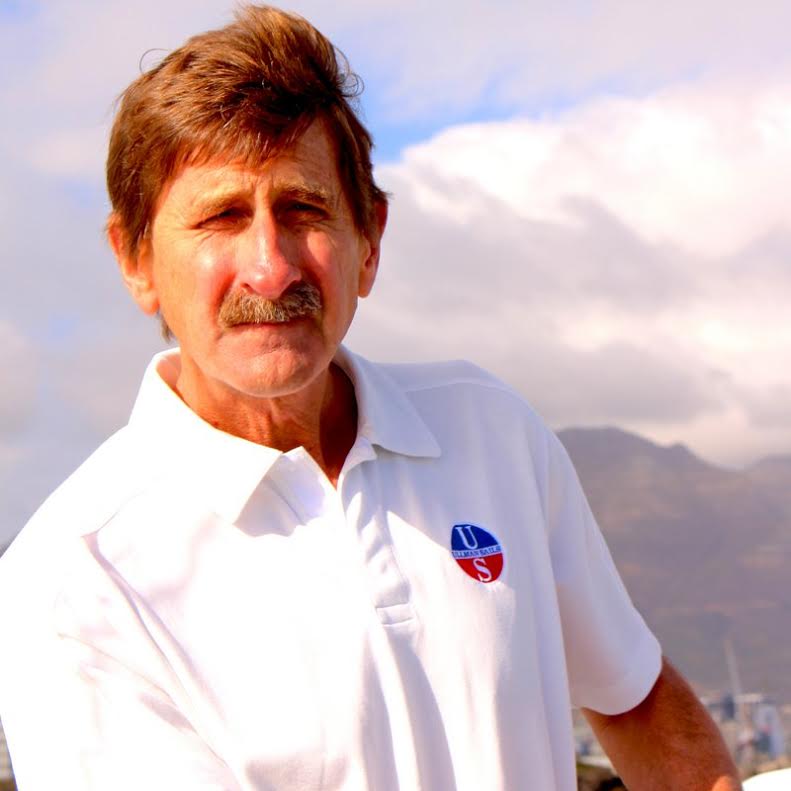 We all know of him and if you haven’t, well, you need to Google this guy right now. Skip, who has competed in four Whitbread Round the World races and co-skippered the 33-meter catamaran ‘Innovation’ in The Race Around The World, was recently honored with the prestigious Blue Water Medal by the Cruising Club of America for his many years of cruising and exploring the Antarctic.

Ullman Sails hits us up again with another exclusive in their ‘Ask Ullman’ series as part of their latest announcement that Skip has joined the Ullman Sails team as a Brand Ambassador. Skip can talk about a huge range of adventures, from racing around the world, to sailing at the poles and mountaineering in some pretty cool places, just to name a few. Basically, he is an absolute authority on sailing in extremes, so we asked some questions…

Q: While exploring the Antarctic aboard your Pelagic vessels (including the 54ft ‘Pelagic’ and the 74ft ‘Pelagic Australis’), you’ve sailed in a lot of conditions that push the boundaries of what sailing equipment is designed to handle. What are some of the most extreme conditions you’ve seen? When do you start to get nervous?

A: We sail in high winds habitually which is no surprise in high latitude sailing. The sea state is the real threat. And then there is the objective danger of ice in the sea (bergs, bergy bits and growlers) and, of course, icing on deck if you’re sailing in sub-zero conditions. All of this combined puts a lot of healthy strain on the crew (and I include the charter guests here) and certainly on the vessel and its equipment. In this environment the gear onboard has to be bomb-proof as the last thing you need is equipment failure. Coupled with the cold conditions which can limit movement and the ability to react, things can quickly get out of hand. But, if there is one situation that makes me the most nervous, it’s sailing offshore in heavy weather, well away from any shelter with growlers and bergy bits suddenly thrown into the mix. Breaking waves look like growlers, growlers look like breaking waves, and then nightfall kicks in if you are early or late in the season – this certainly focuses your mind and keeps your hands full.

Q: How have around-the-world races and/or exploring and expeditions changed over the last 35 years?

A: I think you can describe that shift in two words – communications technology. This is an evolution and it affects not only how things are done in the field, but more importantly why. On our first Whitbreads communications were basic, if the HF radio worked at all. Although great when you could communicate to the other boats in the race and to shore, the lack of it when it broke down did not actually detract from the experience. In fact it enhanced the sense of remoteness and the reality of the hostile environment we were in and this added to the adventure – what I would call from today’s perspective, a ‘real adventure.’ Basically we were left to our own devices and solutions when things went wrong. It provided for a great sense of self reliance. Counter intuitively it also fostered a great sense of freedom. This was the same on our early expeditions to high latitudes. Communication while being in the field was not considered interesting in itself. Today, by contrast, communicating to the media fuels the engine of sponsorship and funding of nearly all adventures, not just sail racing projects. Witness the central role communication technology played in the Volvo Ocean Race; the same applies for nearly every adventure activity. There is no turning the clock back of course, but I feel incredibly privileged to have been a part of both of these worlds, back then flying below the radar and having a helluva time, many stories best left untold; and in today’s world of letting it all hang out, blogging our way around with self-censorship being pretty important!

Q: You were in Nepal on an expedition during the big earthquakes in April. While your team was relatively unaffected what can you tell us about the experience?

A: I was part of a group of six mountaineers from the UK in a very remote part of northwest Nepal, attempting to climb three virgin 6000m summits along the Tibetan border. This was right off the tourist map, nine days of hard trekking to a base camp with 20 mules carrying 900kg of supplies and equipment. Sort of an old style ‘Imperial British Expedition’ of exploratory mountaineering. We had one satellite phone for emergency calls only and we didn’t use it until two weeks into the expedition when I called home to say I would be back early, as unseasonably deep snow at 4000m prevented the mules from grazing. That simple fact signaled an end to reaching the climbing objectives, the start of which was still two days away. This call home revealed the news of the earthquake which had happened five days before! We were far west of the epicenter that generated the fissure mainly in an easterly direction, so we were completely unaffected. There was nothing to do but return the way we came, especially in deference to our local Nepali men who were very worried about their families in Kathmandu Valley. Of course, we have a plan to return next year for unfinished business.

Q: What would you rank as your top sailing or exploration accomplishment(s)? Why?

A: There have been so many during my 45 years in this game, and 27 years of doing expeditions, that they all blend together. At this stage of my life, notwithstanding the ocean racing career which also had more than enough highlights, I think ‘accomplishment’ can be defined as pulling off many years of planning and executing successful high latitude expeditions, which are always challenging. Our expeditions take our clients on an adventure where they are fully engaged in the wild side of nature, they are not classic charter situations where drinks and meals are served and the dishes disappear into the galley on the other side of a bulkhead. Let’s face it, the word ‘expedition’ is so overused in travel these days it has become almost meaningless, but not if you come with us! There is also the logistic support side for special projects we provide with our sailing vessels
which I find personally the most satisfying. This could be a science project, filmmaking, providing safety cover for a kayak expedition, supporting cold water divers, following the Shackleton Traverse on South Georgia or achieving other mountaineering objectives, which of course is my passion. Successfully completing each of these ‘mini’ expeditions is extremely satisfying. We might do two of those per season, and although they are not newsworthy in a wider media
sense, they are very pleasurable as these teams are experience-driven, rather than mediadriven.

If you have a question for Skip or any of the other experts over at Ullman Sails about anything sails from design and construction to boat handling and tactics, send them to the Ed and he will choose the best to forward on!