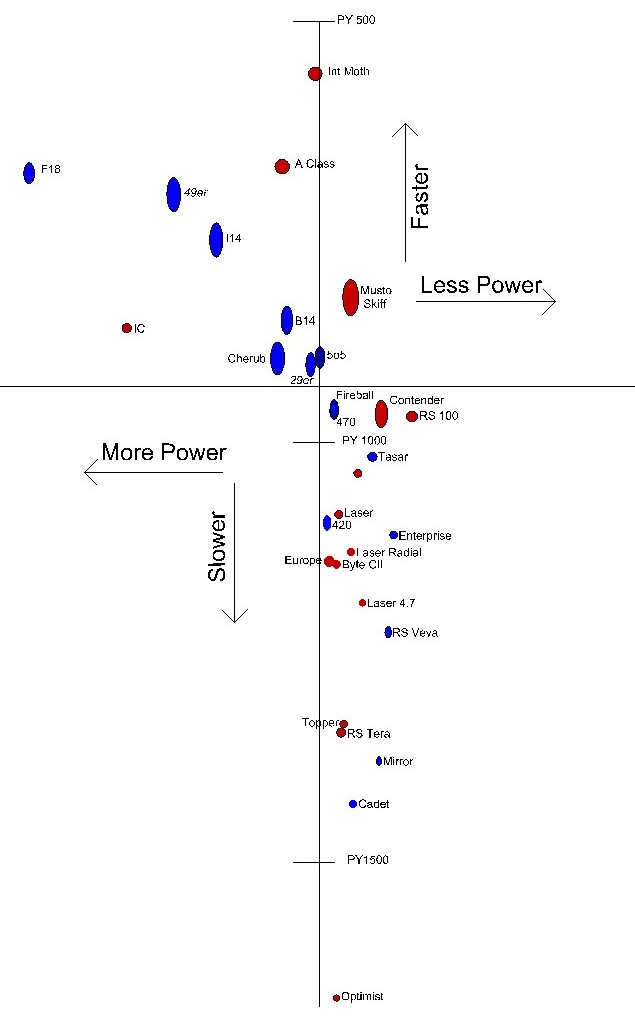 We’re always happy to hear from longtime SA’er and high performance guru Julian Bethwaite.  He checked in with this interesting infographic, and here’s why.

For the umpteenth time, I was asked 2 weeks ago what boats should a 12 year old Opie kid sail to best place him in a 49er when he gets into his late teens, early 20’s.  This mum was very smart, with a far greater grasp of numbers than I, spreadsheets, etc., but I still struggled to get the flow across, so I generated the following graphical representation, and she has come back and said, and I quote  “Thanks for following up. Interesting graphical depiction of the relative properties of these classes of boats, brings the stats to life.”

So, what I am seeking from you guys/gals is a peer review!

I could give you all my figures, but I think that would predispose a bias, which I have little doubt I will be accused of.   Instead, I plan to explain my rationale, and asked others to have a go at there own interpretation and maybe we can blend them and end up with something meaning full.

So what I have done is go to the RYA site and dig out the relevant PY [Porthsmouth Yardstick] numbers.  I have picked the boats mostly on simplicity, firstly if I did not know them, then I could not represent them.  I then went into the ISAF site and looked up the technical data.

So I have exclusively used that information unless the RYA/ ISAF data was simply wrong, in which case I went into that class’s rules and gleaned it from there.

An example, 470 appears not to have a PY number, so I worked out approx where it should be.  I included the IC because its too interesting not to.  And we all know a moth sails heeled to windward and greatly increases its RM by doing so, where as a Laser, when sailed “flat” is actually heeled about 6° to leeward.  I have not imputed these shifts in CoB, I have assume the boats are all bolt upright as per their numbers.

Finally I have used the ISAF high performance definition about sailing faster than the wind, downwind, most of the time, to draw the red line. Not sure why a 470 does not do it more often (Tack down wind), but we also know a 29er does, most of the time, (and yes, I know why).

What is irrefutable is that a 5o5 and to a lesser extent a I14, spend a lot of money and effort setting their boats up so they can quite deliberately switch to HP modes both upwind and downwind, so, from my POV I consider the 5o5 to be the tipping point boat. It has has a foot in both camps, one could say the best of both worlds.

Get the full explanation from JB here in the thread.

this is why phrf fails