Rail Meat checks in on the eve of the Fastnet. That’s his godson getting ready to assume skipper duties in the not-too-distant-future… Jump in the thread here.  UPDATE: For the full light-air starting video of the biggest fleet in Fastnet history, click here. 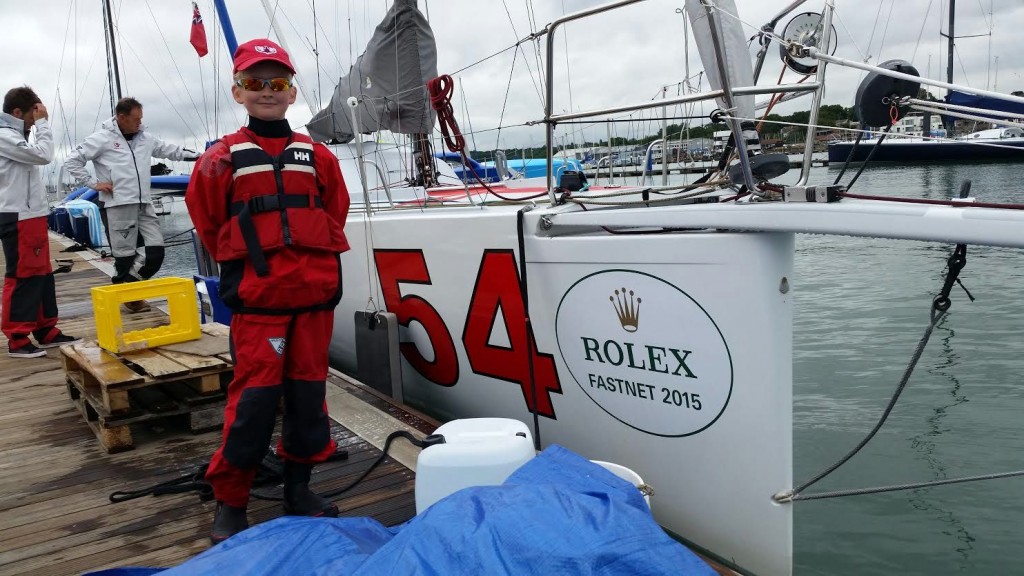 Dragon is prepped and ready to go, excess weight off loaded, GRIBs refreshed, provisioned and some extra water laid on to account for what will likely be a slow race.  We have been in Hamble since last Sunday, making it a pretty leisurely time for getting things sorted.  This is in no small part to the help I have received from Phillipa Hutton Squire and Paul Peggs.  Both local to Hamble and both plugged into the Class 40, they have been a huge help with logistics.

Dragon’s crew for the race is rock-star awesome.  Simon Day and Richard Feeny have come over from the States for the race.  Simon’s day job is as an engineer at NEB, but he has also owned and campaigned a Mini, and clocked some time on Toothface I and II.Richard might be lacking in Class 40 experience, but he comes to the table with a vast set of experience in racing including racing, development and coaching in the multi-hull classes including a stint racing in the Extreme series.  Our fourth brings to the table the local knowledge.   Two time Olympian and pro driver / tactician Andy Beadsworth lives on the Solent and is filling in a huge hole that cost me several places in the 2011 edition.  We have also had a great assist from ian Moore who shared some nav and meteo thoughts with us today.

The weather window is looking challenging.  The Azores high has been split into two and located pretty far west and south, but is organizing itself and moving north and east.  Combined with a high that is sitting on the Channel and then a loosely organized low that will be moving towards Greenland in the next couple of days we have a lot of different inputs into the picture.  We are expecting a light north westerly gradient on Sunday for the start, with the fleet sailing into a ridge of high pressure and light air on Monday that will persist into Tuesday.  By Tuesday, the southeast boundary between the low pressure system and the Azors high should produce some reasonably strong southwesterly flow with winds in the low teens for Wednesday into Thursday.

We start mid day on Sunday, on an outbound tide that should see most of the boats able to make the Needles at the western end of the Solent so long as we get any type of breeze at all.  But after that, it is anybodies’ guess.  The next gate is Portland Bill, 30 miles or so to the west and the tide turns there at 6:30, producing vicious currents.  Some of the fastest boats are going to struggle to make it there in the predicted conditions, and there could be a lot of kedging come nightfall on Sunday.  If any boats do make it there by the tide turn, they could stand to make huge gains on the fleet over night into Monday.

The predicted conditions across the course should result should be a race that favors smaller boats who will be able to ride the south westerlies into the back of the faster fleet as they come down from the Rock.  Faster boats that will have struggled to finish by Wednesday evening are going to be sitting in Plymouth watching the slower portion of the fleet romp down the rhumb line all day on Thursday and end up correcting out in front of them.

If I was racing in IRC, I might care about all of that, but the reality is that we have 23 Class 40’s registered and that is the only fleet that I am going to focus on.  Of those 23, there are probably ten or so boats that have a shot at getting a podium spot, and I expect it will be a close thing the entire way.  Looking at the scratch sheet, the handicap looks something like:

Its difficult to assess where Dragon might show amongst this group. We have a top notch crew, and the boat is prepped as well as she has ever been.  Most of all, these conditions are indisputably in our sweet spot.  I feel as if we have as good a shot as any boat in the Class 40 fleet, and we are going to be gunning for it.  The race will be won by whom ever can best navigate the predicted light air, and make the fewest mistakes.