Brian Hancock always writes stories of good interest and we are very pleased that he has agreed to write for us. Enjoy the following and be sure to check out his excellent website. 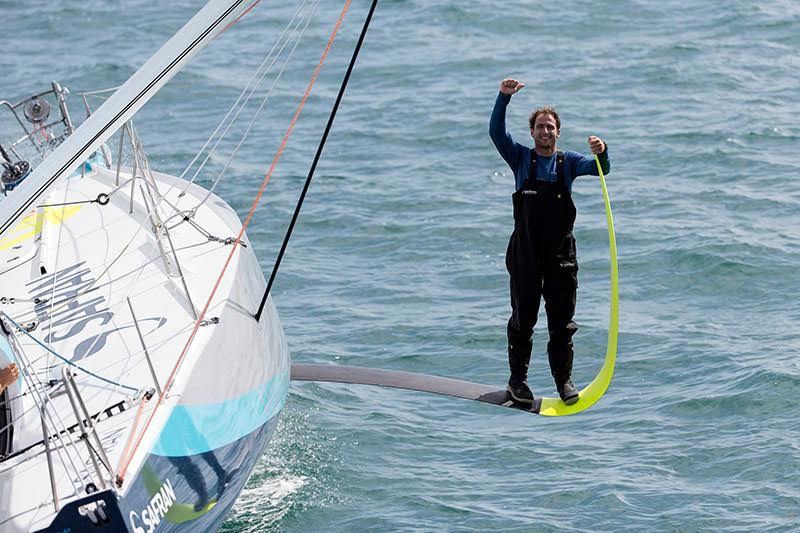 When my children were small one of their favorite books was The Wreck of the Zephyr by Chris Van Allsburg. The story was about a boy and his obsession to become the world’s greatest sailor. He so badly wanted to be the best that by sheer willpower he was able to coax his boat out of the water to fly above the waves.  It was a fanciful story but my kids would always finish the book and say, “boats will never fly.”

Fast forward a few years and what do we have; flying boats and boats that almost fly. Since the last America’s Cup we now all know that boats can fly but what is it about boats that almost fly. If flying is possible then why not just fly?  This is a story of an idea in the making, a simple solution to a complex problem. This is a story about DSS – Dynamic Stability Systems – and how it’s revolutionizing modern, fast sailboats.

DSS was created (and patented) by America’s Cup designer Hugh Welbourne almost a decade ago. It was a simple idea that would add righting moment and generate lift to almost any boat that is fitted with the system. Let me explain. All boats need righting moment to counter heel which occurs as a result of the wind blowing in the sails. Most boats have a keel with a blob of lead at the bottom; crude but effective. As things have developed over the years racing sailors have refined canting keels, keels that can be swung to windward. By doing so you are able to increase the leverage arm of the keel meaning that you need less lead which in turn means a lighter boat which results in more speed.

The problem is that once the keel is no longer on centerline there is nothing to stop the boat from slipping sideways so daggerboards were added to do that job. Offshore race boats like the VOR 65’s and the IMOCA 60’s that participate in major events like the Volvo Ocean Race and Vendee Globe have refined the canting keel but over time have hit a plateau in development largely as a result of rules that restrict the amount of the cant in the keel. SpeedDream, unrestrained by rules, is an attempt to take the canting keel to the extreme and fly the keel out of the water. SpeedDream’s unique design also included Hugh Welbourne’s DSS although in a more futuristic form.

So let me explain DSS and the simple genius of the system. DSS is a leeward lifting foil, a short fin that projects out of the side of the boat to leeward. The fin does two things; it increases righting moment by stopping the boat from heeling. It also produces lift. The foil, like all appendages on boats, has an aerofoil shape that produces lift. Once the boat is going a certain speed it starts to lift the boat out of the water, in other words reduces displacement. It also reduces wetted surface which in turn reduces drag which in turn increases performance. Indeed the boats are half flying which is what you want when you are sailing alone around the world. The last thing you want is for your boat to lift completely out of the water before crashing down again. 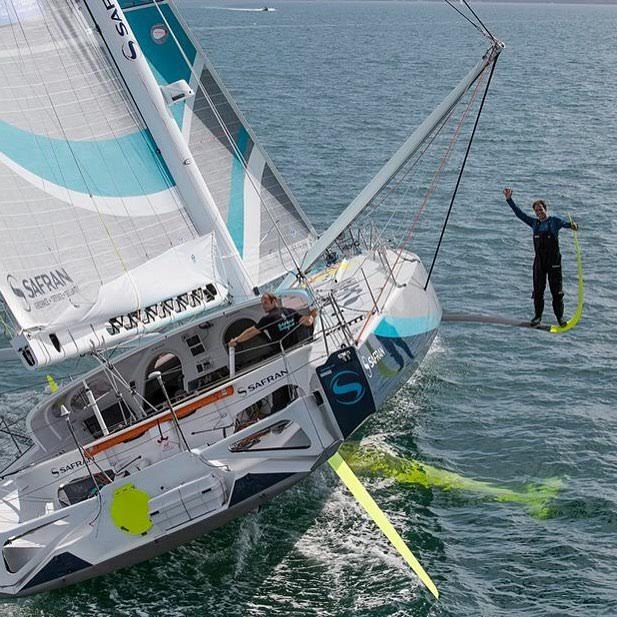 The original DSS systems were fairly simple; a basic fin that stuck out of the side of the boat. These days they are much more elegant pieces of engineering pioneered largely by the new IMOCA 60’s. Witness the foil on the newly launched Safran. Let me explain how we got from a simple fin projecting out the side of the boat to a curved platform perfect for generating publicity stunts. Under the IMOCA rule you are limited to five movable appendages; the keel, twin rudders and twin daggerboards. So what do you do if you want to add the DSS which would count as another appendage? You would do what Vlad Murnikov did when he drew the first renderings of SpeedDream. You combine the DSS fin with the daggerboard. Take a look at the photo of Safran. The flat section where he is standing is the DSS part of the equation and the curved part is the daggerboard; genius.  You are able to add the DSS and remove the daggerboards while still addressing the issue of stopping the boat from slipping sideways.

There seem to be two kinds these new DSS-L foils. Tip up and tip down. With the tip facing up the main shaft is vertical in the water when the boat is heeled acting like a daggerboard while the tip is close to horizontal in the water acting as the DSS foil. With the tip down, as in this early rendering of SpeedDream, the main shaft acts as the DSS foil while the curved tip is there to prevent the boat from sliding sideways.

Time will tell if these futuristic foils work as well as everyone hopes. I like the fact that it was an ingenious way to get around the IMOCA rule, but I wonder if things would have been better had they just changed the rule to allow a daggerboard and a DSS. – Brian Hancock.