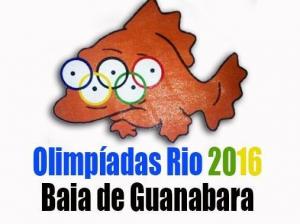 As if this story hasn’t been coming for months and months. As if this issue hasn’t been lied about by the Brazilians, sat on by the USOC, and ignored by ISAF. Way to go, fucktards all.  We propose the new Rio 2016 logo to the left.

Thirteen rowers on the 40-member U.S. team came down with stomach illness at the World Junior Rowing Championships — a trial run for next summer’s Olympics — and the team doctor said she suspected it was due to pollution in the lake where the competition took place.

The event took place amid rising concerns about the water quality at venues for the Rio de Janeiro Olympics, now less than a year away.

The Americans were by far the hardest hit at the regatta that concluded over the weekend, with reports of vomiting and diarrhea. Other teams in the competition reported some illnesses, according to World Rowing, the sport’s governing body, but those were about as expected at an event that featured more than 500 young rowers. Read on.