down by the river 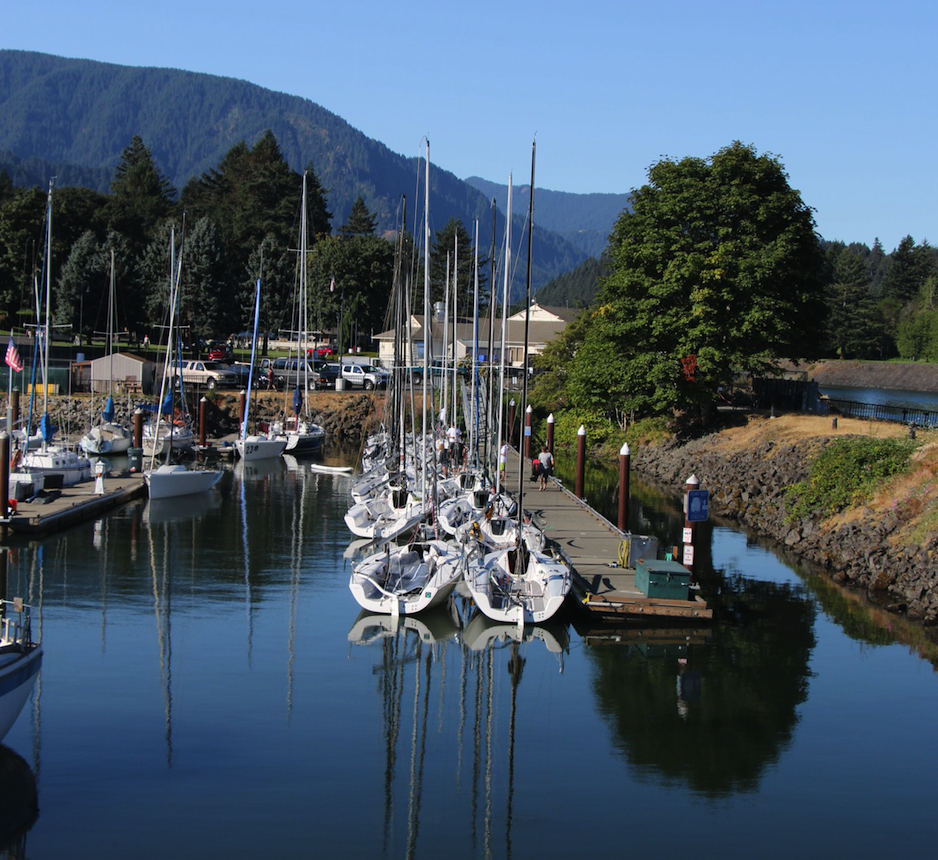 The Melges 24 US Nationals has only the most rudimentary presence, so we’re stoked to see that both Petey Crawford and Longtime SA’er and 48 North editor Joe Cline are onsite to report on one of the biggest M24 fleets to hit a US event in years.  Joe’s sending in dailies and Petey’s bringing you video and photo updates on SA Facebook for the Sperry/Sailing Anarchy World Tour; plenty to enjoy on your screen from one of the world’s best racing venues.  Here’s Joe, with photos from Petey/Penalty Box Productions.

CGOD
Columbia Gorge One Design (put on by the Columbia Gorge Racing Association, or CGRA) was the Pre-Nationals event last weekend. 17 M24s assembled to start testing their meddle in this blustery summer paradise. Two days of racing saw Anacortes-based “Mikey,” owned by Kevin Welch and driven by Jeff Madrigali, take a picket fence of bullets. When your dropped score is a [1], you know you’ve had a good weekend. He was followed by Doug Wilhelm on “Wilco” in second, with Canadian Olympian Richard Clarke on board. Dan Kaseler driving with Dalton Bergan calling tactics rounded out the podium.

The gorge delivered as expected and it was positively Gorge-ous. Two days of racing brought the fleet seven races and a wind range from the low teens in the mornings to 20-30 in the afternoons. Top speeds were noted in the high teens, with one boat reporting a rocket ship blast of 24 knots in a monster puff. The rippin’ planing rides made for happy, tired sailors by the time we beat back up wind to the Cascade Locks marina for Saturday’s catered dinner and beers in the CGRA hut.

It was a spectacular primer for this weekend ‘s Nationals event. The quality of the competition was extremely impressive across the 17 boats at CGOD. Nearly three times as many M24s will be jumping into the fray this weekend, and some of the all-time greats are making appearances. The most likely candidates to take the glory from the CGOD Winners on ‘Mikey” are recent Melges 24 World Champions (and multiple National Champs) “Full Throttle”, skippered by Brian Porter with Andy Burdick pointing the way. But with the depth of talent, commitment, experience, and enthusiasm in this fleet, noting these two favorites hardly makes this championship a foregone conclusion. In addition to the podium finishers at CGOD, several other VERY top boats have pulled into Cascade Locks, including the always competitive Bruce Ayers on “Monsoon” and the recently crowned Canadian National Champion Richard Reid with Quantum’s Scott Nixon helping keep the boat going the right way, among many others.

The National Championships are only three days of racing, but for those of us doing both CGOD and Nationals, it’s kind of a summer vacation. Today, several of these incredible pros led a clinic in breeze around 30 knots. This Melges “Speed Camp” let the competitive juices be set aside, and an honorable “rising tide” approach from the likes of Brian Hutchinson, Jeff Madrigali, Dan Kaseler, Chris Snow, and Andy Burdick took center stage. I am not a M24 veteran, but if this is the dynamic of information sharing and genuine mutual benefit, it’s no wonder this class continues to be one where the most ambitious amateurs choose to have their fun bloodying their knuckles with some of the best of the best. The speed camp raised a lot of interesting questions and left me thinking on a couple of things in particular. 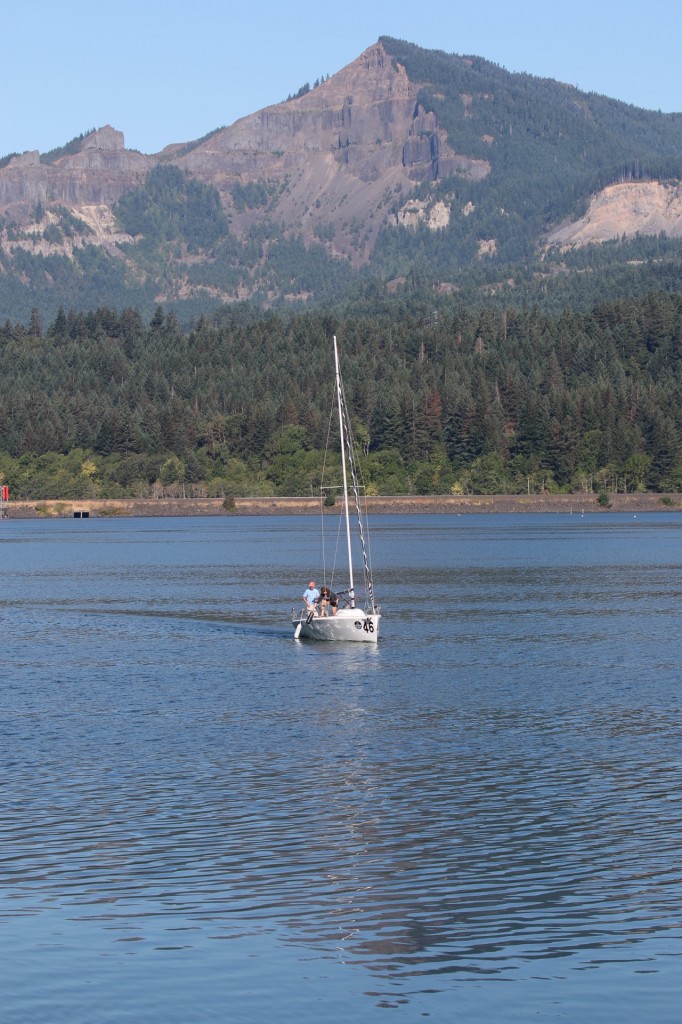 Innovation vs Execution
The Melges 24 may not be for everyone, but let me take this moment to encourage you to hitch a ride if you never had – especially if the breeze is enough to put the bow up and rip it. The interesting thing to me is that the boat is accessible enough for good amateurs to go compete well and technical enough to still be puzzling the pros. There is NOT a plain and simple book on how to sail the Melges 24 at the highest level, and the variety of styles and approaches displayed by the various pros left me feeling both intimidated and inspired by the array of ways to sail this boat fast. Jeff Madrigali and his “Mikey” crew have an incredible upwind mode. They are fast, and they are high, and thus far, they’re the first boat around every mark. They’ve worked a lot on set-up and are doing a lot of things others may not be, like tightening their lower shrouds slightly more than the tuning guide calls for, trimming their jib in more than others might recommend, and focusing on a consistent angle of heel above all else. They’re so high and so fast. But, theirs is not the only successful mode upwind, though it has been thus far in this venue. World Champion Brian Hutchinson gave credence to Dan Kaseler’s upwind style several times, saying that he can buy into the fact that height may not be the be-all and end-all. Dan’s slightly more bow-down upwind style with a fuller jib has been very successful in the past, as well.

When it comes to the downwinds, there’s even more variety of opinion. Generally, the consensus with the Melges is that speed beats VMG angle, because your apparent wind when you’re planing downwind presses you down the course even more effectively. But if you listen to Hutch talk, he thinks the slightly lower road has benefits, and in particular he warns against chasing speed up and sacrificing your proper angle of heel. And if you start talking about what to do with your boom vang, there’s an old-school vs. new school debate that hasn’t even begun to see a consensus. Mostly people are going vang all the way off, traveler down, and hand trimming the main to accomplish a tighter leech and to be able to de-power more quickly. But, it’s certainly not the only way. Are skiff-type blow-through gybes better than the traditional ease-to-the-forestay-and-pull classic? It’s even less clear what the answer should be. The “Mikey” crew noted that they can do a skiff gybe if a situation requires it, but they don’t execute it nearly as well as the classic gybe, so they do the classic gybe a lot more often.

Ultimately, all of this stuff comes down to some balance of innovation and execution, and different people succeed massively at one, the other, or both. There’s no one path to the mountain top here. It’s sort of obvious which people focus on which, but it’s hard to say whose more likely to cross the line first, and even tougher to say who’s better for the sport. You can be really, really good just by applying what the good guys are doing better than your competitors. Or, you can innovate, and be more creative or alternative, and wind up looking smarter and faster than anyone thought possible. There’s a balance of this in the Melges 24 class, and it still exists, even though it’s been 23 years since the design was debuted. It is my opinion that this possibilty for innovation and top-level execution is what keeps the really good pros coming back to the class and loving it for more than a paycheck. And, in my opinion, it’s equally impressive that Dan Kaseler and Bora Gulari realized as Moth sailors (who got it from kiters) that the letting the outhaul way off downwind is fast if you have your vang off and a twisty leech, as it is that Jeff Madrigali can drive super far upwind executing a perfectly balanced angle of heel, inspiring jealousy and frustration and admiration from his other very accomplished competitors.

As with most things in sailing, even in a comparably narrow instance such as this, interests, approaches, and motivations abound. I continue to be floored by how frequently in sailing I find myself saying, “People would absolutely love this, if only they had the opportunity or gave it a shot.” This is another prime example. We’ve been having a load of fun here in the Gorge, and with a practice race tomorrow, and three days of Nationals ahead… it’s only just beginning!

we coulda told ya