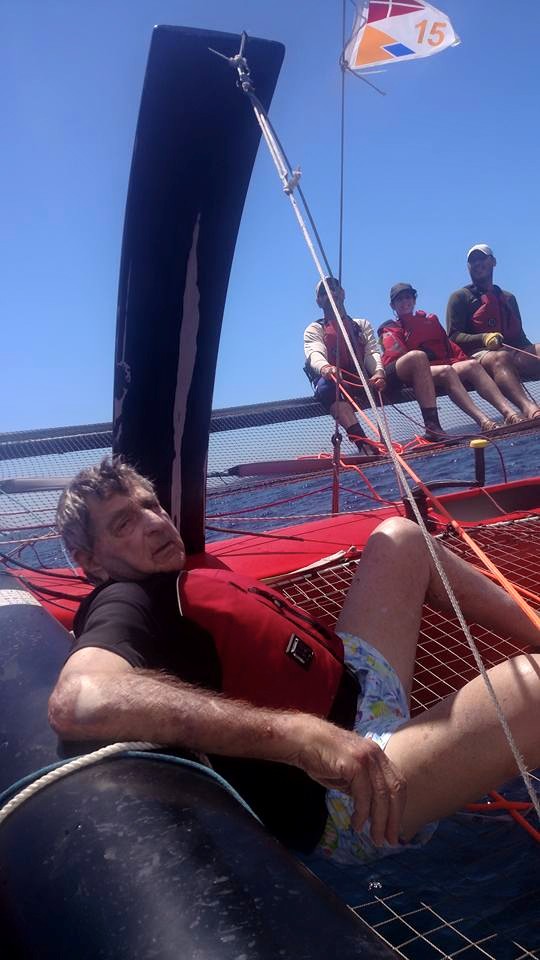 We deployed our gennaker right from the start and that kept us moving through the glass at 6-8kts but at least 15 degrees lower than most everyone else.  We made two short miserable tacks back to the fleet through about 120 degrees and then made up our minds that we needed to just keep the boat moving down the course, sail our own race, and that patience and perseverance would win the day.  Credit to our most excellent navigator. So we followed the beach with the gennaker up trying to sail as tight as we could without parking the boat and waiting for the pressure to build and clock North.  It finally happened at around 14:30.  The wind began filling in and clocking North and we got lifted right up to the West end of Anacapa doing 12-15kts close reaching in the light but building breeze.

On the back side of Anacapa the wind was steady and mostly West with still some South I think so no lee off of Santa Cruz Island.  We bore away around Anacapa but stayed on Starboard for another 45 minutes making 17-18kts with great VMG towards King Harbor.  Then we gybed in for Malibu and slowly accelerated up to 20-22kts.  We had to gybe twice to clear a freighter in the channel but kept on building speed until we blasted by Pt Dume doing 24-25kts.

From Pt. Dume we had just about a perfect layline all the way into King Harbor that allowed us to come up at the end into the fading breeze to keep the speed on all the way to the bell buoy.

Even with 150lbs of extra safety gear and a painful start, we kept the boat moving and had a blast sailing 97.7 miles at an average speed through the water of 13.4kts.  We had a great crew that sailed well and stayed focused for the whole day.  This after 3 straight days of loading, and trailering, and building, and launching, and staging vehicles and driving around LA.  What a mission! Thanks guys.

This was my first mid-distance race on the boat and it was a fantastic experience.  I can’t wait to do more.  Hopefully the ORCA guys didn’t mind us playing in their sandbox.  Thank you ORCA for helping me satisfy the safety requirements for the race.  Santa Barbara and the whole coast and waters were absolutely beautiful. 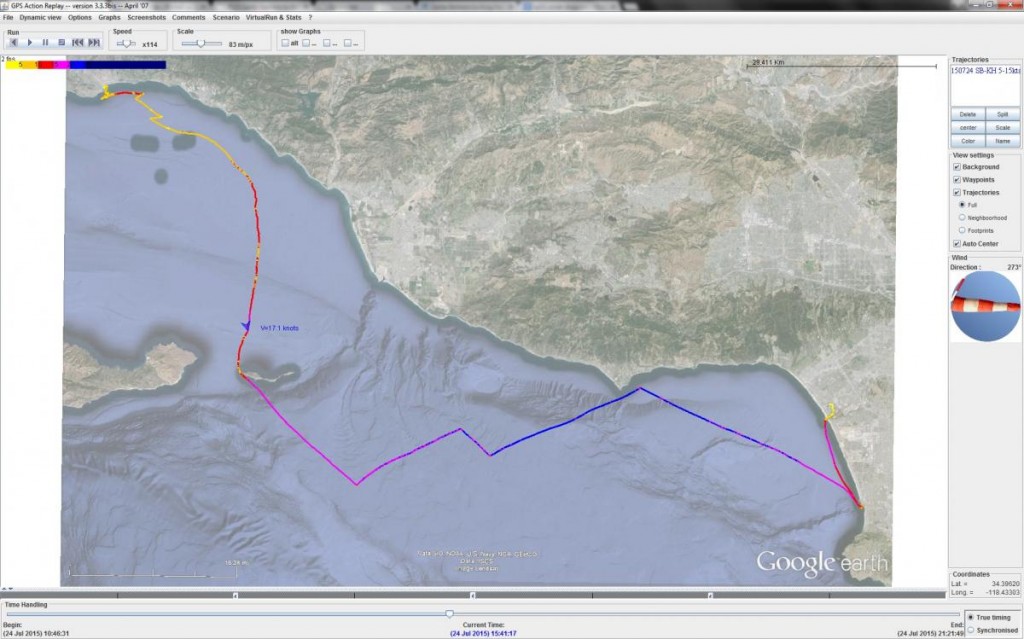 The only negative was getting a call from the race committee this morning delivering the infuriating news that one of the TP52s (guess which one) lodged a protest against us saying they were “sure [I] didn’t complete the proper course in the Santa Barbara race and should withdraw.”  And that I “should have rounded Anacapa Island.”

I replied by providing my GPS track.  This satisfied the race committee but not these guys because according to them, “not one person in the fleet saw [us] round Anacapa Island.”  Apparently, the mind cannot comprehend that inshore and in coastal waters an M32 beach cat crushes a TP52 lead mine all day long.

Despite the annoyance of managing the protest today I still managed to take my wife, uncle, and 93-year-old grandpa for a joyride out of Marina Del Rey and get down to King Harbor for the party and to pick up my winning silver octopus cupcake stand trophy.  Good times!

putting the power down