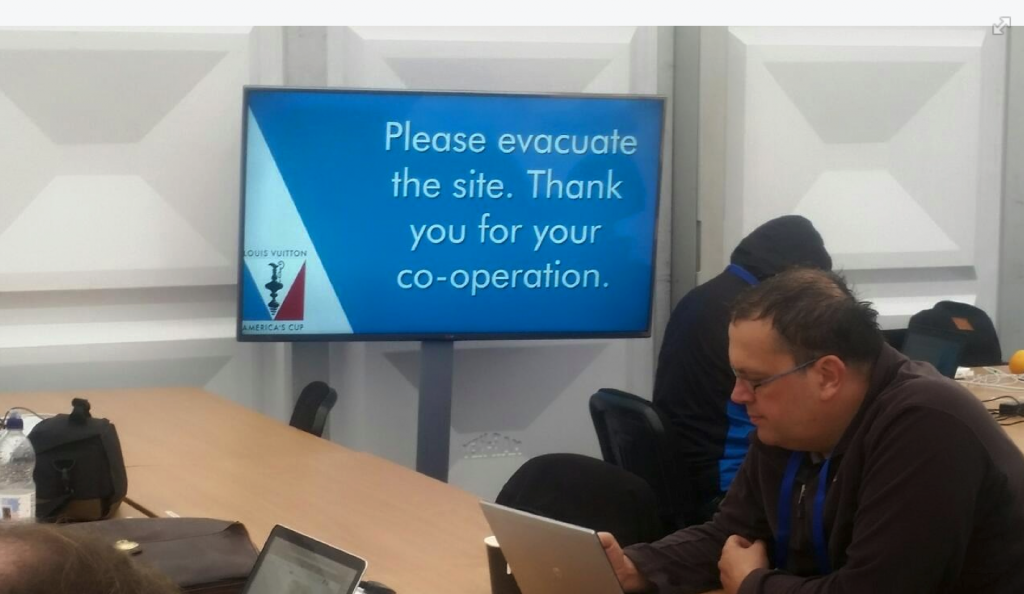 This is the event where we learned that the same, gorgeous live feed the world saw two summers ago was going to cost some serious money – 8 bucks for what turned out to be an hour of racing – and that in most countries, you wouldn’t even be able to watch it on your laptop anyway (but you’d only find that out after you paid).

This is the event where we learned that Russell’s minions are so understaffed and underqualified that they were literally wrapping up TV distribution deals this past Friday night after having TWO YEARS TO SELL THEM. And those TV deals?  A complete and total joke.  Nothing  broadcast in the defender’s home country for this one.  Nothing in New Zealand, the country that supplied nearly every one of the audience from AC34 and the only country to pay meaningful money for TV rights last time around.  Nothing in sailing-crazy Australia, where the defending skipper and seemingly half the fleet is from.

So Russell Coutts tries, once again, to pull one over on the world, but this time, the world laughs, mother nature sweeps in overnight, and the race village is so poorly set up that a common English wind event EVACUATES THE AMERICAS CUP.

We’ll have more analysis of the complete mess that was the inaugural foiling ACWS event later in the week once our friends at the ACEA have had a chance to answer thousands of fans’ criticisms on Facebook, Twitter, and the forums.

Results stand after 1 day of racing, and the Sailor Girl Nic Douglass grabbed the best post-race interviews over here.  For a look at the actual evacuation conditions on video, go here.  Thanks to James Boyd’s Facebook for the shot above and Cascada (and our 12 year old niece) for the title inspiration.

And by the way, you still can’t watch a race replay on your computer in most countries.