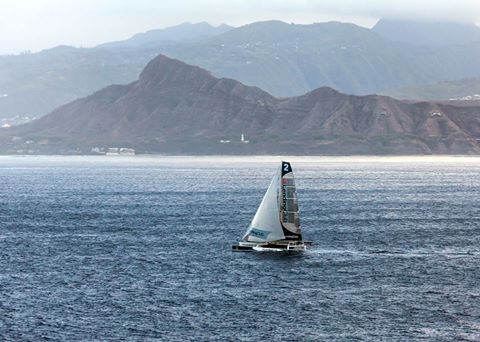 It was fantastic to see Ryan Breymeyer and his team on Lending Club demolish the Transpacific record this past weekend. They sailed a superb passage and knocked more than a day off the record time set by the curmudgeon Olivier de Kersauson on Geronimo. To be fair Lending Club is 15-feet longer than Geronimo, but either way you look at it they had an amazing record breaking crossing. This is a young crew pushing the envelope on decent but not extravagant budget.

I contrast this with the recent 24-hour record set by Comanche, the 100-foot maxi skippered by Ken Read in this summer’s Transatlantic Race. I need to tread carefully here because I am a big fan of Ken Read and I like that Jim and Kristy Clark have invested in sailing by building Comanche, but I can’t help but wonder if it’s not an opportunity lost. Comanche managed 618.01 nautical miles in a 24-hour period to set a new record. That’s an average speed of just over 25 knots. Not bad, but not really that impressive given that the conditions were perfect for fast sailing. In the same conditions the MOD 70 trimaran Phaedo3 clicked off a 24-hour run of 652 nautical miles. Heck in the last Vendee Globe François Gabart on Macif logged 534.49 miles at an average speed of 22.27 knots. One guy, all alone, on a boat 40-feet shorter than Comanche. Now that’s impressive.

I realize that Comanche was designed to be competitive under IRC but this enormous, and I am guessing very expensive boat, is just another slab-sided, unimaginative, lacking in innovation VOR-100. I can’t help but think that so much more could have been done to make this superyacht into something really super instead of taking a bog-standard design and hitting the magnify button on the copy machine. It took a crew of 20 on Comanche to set a new monohull record, but despite the size of the boat and the size of the crew they took almost half a day longer than the trimaran Phaedo3 who recorded the fastest crossing in the Transatlantic Race with just seven on board. Lending Club sailed with eight.

OK apples and oranges but my point remains the same. Bigger and bigger boats with more and more money chucked at it will result in faster boats and more records being set and broken, but when does it end and why is no one building something that is not a cookie-cutter version of something already built; just bigger? Time for some innovation I say. Time for someone with deep pockets to think out of the box and build a boat worthy of a world record.

Green Dragon and the Delta Lloyd