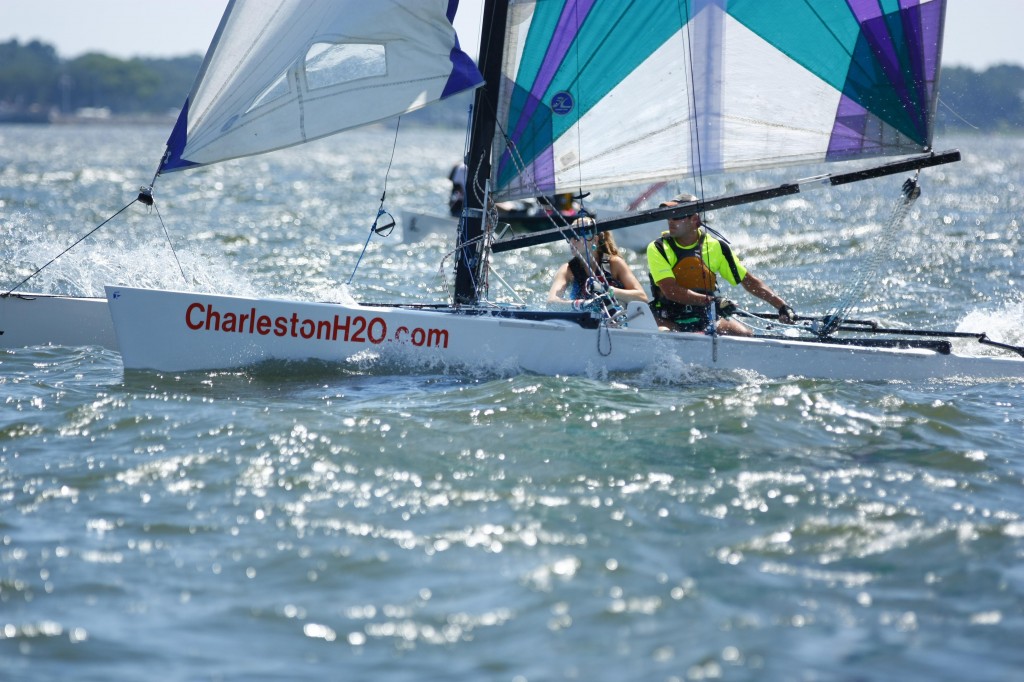 Thanks in large part to Nicholas Hayes and the movement he began, sailboat racing is on the upswing in hotspots around North America, and while the new face of sailing might not look quite like it did 20 years ago, that ain’t necessarily a bad thing at all.  One of the guys dragging the sport to its new look is young Tim Fitzgerald, and with seemingly boundless energy, enthusiasm, and passion for the sport, the founder of Charleston’s Fort2Battery Race & Party has something new up his sleeve.  Let’s hear from Tim, and you can get in touch with him via the Charleston H20 Fleet website or FB page.

After smoking the Mothies in the 2nd running of the Charleston Fort 2 Battery Race, the growing Hobie 20 fleet’s next stop was the James Island Yacht Club Regatta, where Charleston’s fastest boats race.  The teams’ backgrounds include J24s, Thistles, Lightnings, Optis, 420s, Hobie 16s, and F-16’s (not the boat, the plane), and their 5-6 minute upwind legs while dodging Lightnings, E Scows and Sea Island One Designs was exciting as hell.  At mixed fleet mark roundings you’d look for just a window of daylight, and blast through the hole like Emmit Smith on crack!

In just 14 months, while most local fleets held even or lost a few boats to the war of attrition, the local H20 fleet went from zero to 7 boats locally, with two more on the way. With the exception of the J24, we are now the largest home-based fleet over 20ft in Charleston.  This weekend we had 2 female drivers who led races, 5 coed teams (of 8), and 40% of the sailors were college age or younger, every one of them lit up with excitement and passion. 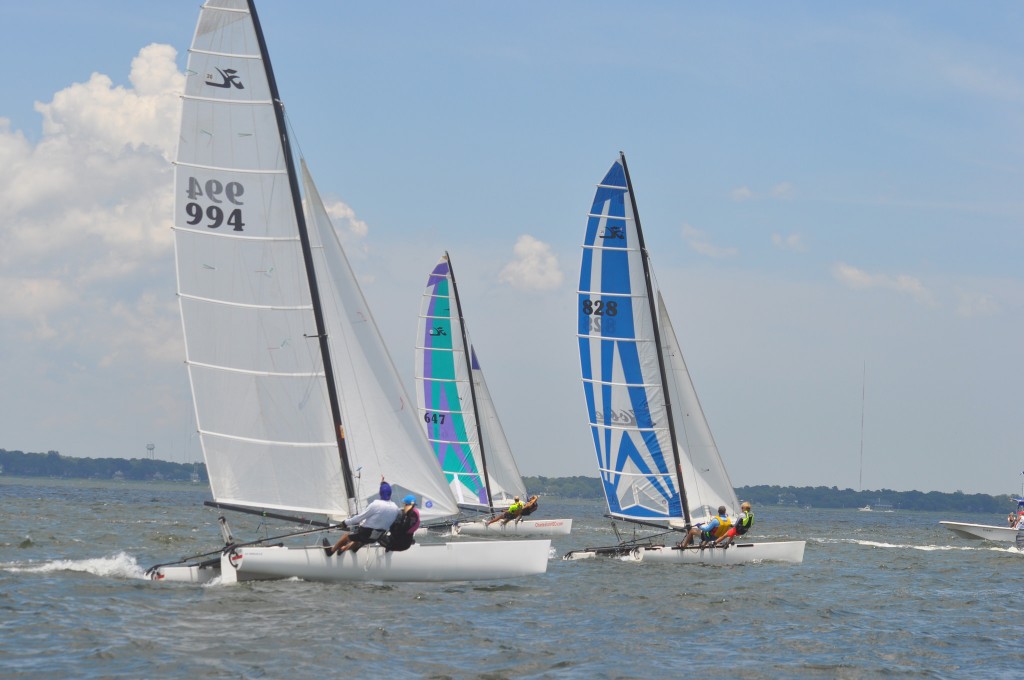 People are so excited here! To give you an example- boats are being bought sight-unseen, up to 14 hours away, and by sailors with near ZERO catamaran experience.  One junior sailor who had nearly left the sport last year for lacrosse and basketball told me that last Saturday’s racing was “a 9.5 out of 10, my favorite sailing day ever”. He can’t wait to race again, and since the regatta, has been working with his dad after school to dial in their boat.  One of the three “Guest Drivers” has already bought their own boat, and right now we have two more people we have to find boats for.

Part of the fleet’s early success comes from our experience with kiteboarding. It’s so much fun that if some other people show up, great.  If not, it’s still the most fun you can have with two free hours.  Going super-fast, getting fire-hosed with water in the face, and wiping out occasionally is an absolute blast. Fleet co-founder Greg Walters said after the event “All three of my kids raced this weekend, I got to sail with two of them, and i’ve never had more fun racing a sailboat.”

Ask yourself- When is the last time your kid, or a friendly non-sailor begged you to go “fun sailing” with them in 10-15kts on your raceboat? Or the last time you reached out for crew and had to turn people away due to the large response?  If the answer took some thought, you may be trying to push the rock uphill.  There can be a better way.

High Performance Sailing and constantly evolving ways of sharing it with the world are unquestionably attracting new people, spectators and sponsors all the way from the America’s Cup and VOR, to the 7000 people who watched the Fort 2 Battery Race via Sailing Anarchy’s live stream.  Whether we like it or not, the environment that we sail in has changed over the last fifty years.  As a result, the 50-year old model that many areas and clubs continue to operate under is no longer bringing in new people and retaining existing ones.

It’s becoming more important than ever for sailing to be inherently fun.  I am not suggesting that we load up novices into aussie-18’s and turn them loose, or have cake and ice cream after every race, but it is obvious that the iphone and X box have raised the level of excitement needed to capture young people’s attention.

In Charleston, the Hobie 20 was the answer. Having a ready supply of used boats at reasonable prices in a spot with a great beach launching club and reliable, consistent breeze (and the ability to outperform the big currents) makes this boat the coolest starter fleet boat in the history of Charleston.   Starting from scratch, we designed our fleet to re-engage and keep those kids who leave sailing because they can no longer fit under an opti boom and don’t like bailing out their boat with a juice jug. We also designed it for the guys who just want to stand the rig up and haul ass on a weeknight. Frequently heard in the group is “I didnt buy this boat to race windward/leewards and worry about tactics.  I bought it to haul ass and have fun.”