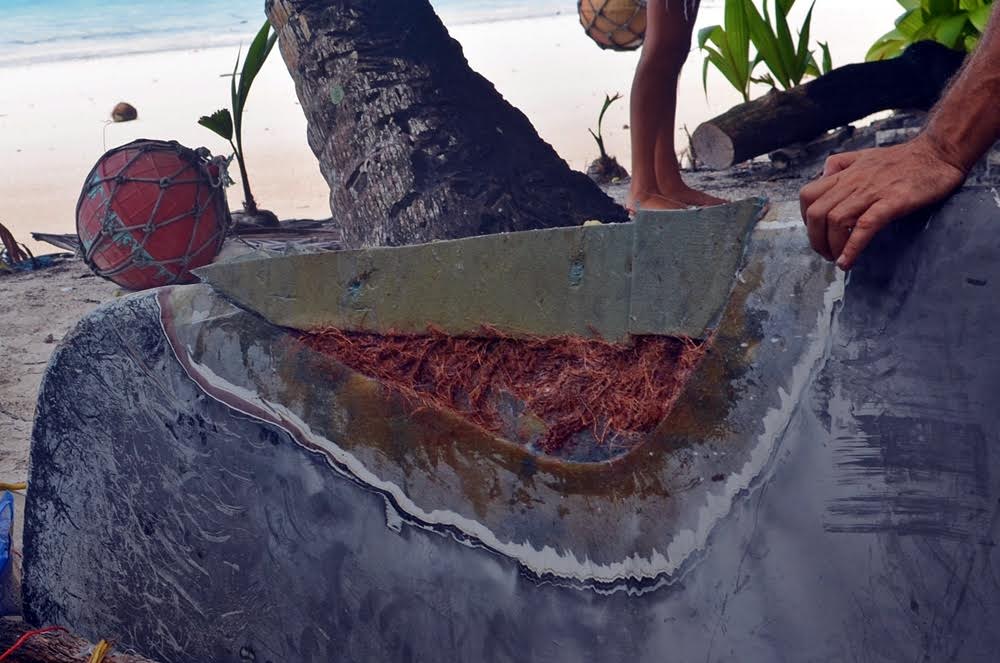 While in remote and uninhabited Salomon Atoll, Chagos (Indian Ocean) this month, a 48’ sloop went on the reef during a squall at 0-dark-30. She bounced nearly 1000’ through a maze of coral. It took 12 hours and much effort by 10 cruisers to protect the hull from damage and get her out and anchored safely.

Amazingly, damage was limited to a bent prop shaft (engine unusable) and rudder badly damaged along the leading edge. What to do when the nearest port with haulout facility involves a 1,000 mile passage? Put 1,500 pounds of water in containers on the bow, to lift the stern. Then drop the rudder, float it to the beach, and get to repairing. Among six boats there, we had a generator and angle grinder, several liters of epoxy resin and just enough biaxial cloth to make the fix. Problem was that inside the rudder cavity we found a bent tang and to our surprise, almost no foam core on one side (lousy fabrication!).

With concern about rudder integrity for the long passage ahead, on which a stout 45’ cruising boat sank last year because of rudder failure, this coconut island provided the solution – dried coconut husk. We set the kids to collecting and shredding the husk. Mixed with epoxy, the coconut composite filled much of the void areas beautifully; and even worked well as filler for fairing the leading edge before glassing the outer skin.

The 1,000 mile passage is now behind them (winds to 30+ knots and lumpy seas up to 4 meters) and repairs to the prop shaft are underway. The rudder remains as tough as a nut.