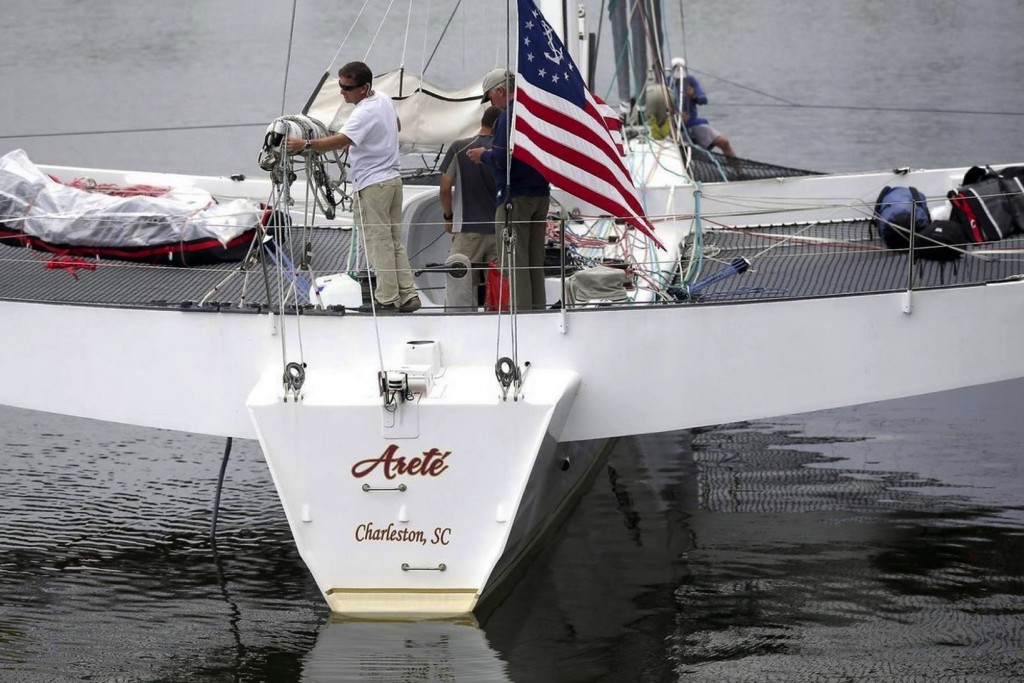 Longtime singlehander Tim Kent sent us this report from the deck of Areté, the Great Lakes’ new king of speed. It’s great to finally see a real, modern ocean racer come to freshwater sailing – even if she’s more than a decade old herself. Expect to see some records fall this summer, especially if the all-Anarchist crew can keep the skinny side up.  Head over to the team’s Facebook Page for photos, videos, and updates.

The idea of bringing an ORMA 60 trimaran to the Great Lakes was an audacious one.  There are an extremely small number of decent examples of the world-beating trimaran class left, fewer are for sale.  The closest ones are in France, and shipping one is ludicrously expensive, so a long transatlantic delivery needs to be planned and executed with all of the vagaries that such a trip can entail.

Because the boat is roughly a 60’ square, it won’t fit anywhere easy, and has to come in through the St. Lawrence Seaway – and if the boat is to be raced on the Great Lakes in the summer, it has to come in during the spring.  The early, windy, very cold spring.  Why so cold?  Because at the northernmost point of the delivery, the boat is at a latitude that is roughly 530 statute miles north of Detroit. 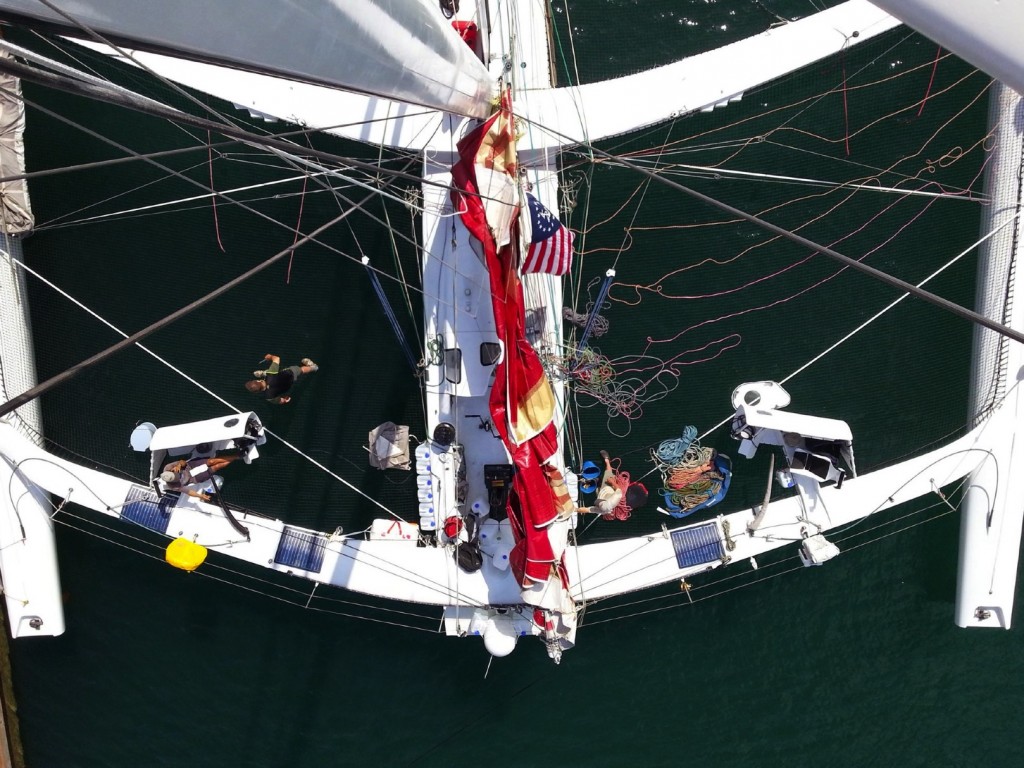 Rick Warner has an affinity for audacious projects – his previous trimaran was the relatively audacious [modified F-31 R] Cheeky – so he dove in, acquiring the ORMA 60 Sopra in April and rechristening her Areté (from the ancient Greek, meaning “striving for excellence in all things”).  The boat made a two-part delivery from the Med to Newport, RI – including an unplanned stop in the Canary Islands.  Members of the racing crew picked her up in Newport and sailed her up over the Gaspé peninsula, down to Quebec, then through the locks on the St. Mary’s River and the Welland Canal – lifted 590 feet above sea level – to her summer home in Port Huron, Michigan.

The team’s first-year goals are simple – compete for first-to-finish in every race.  Our first race was last weekend’s Queen’s Cup, South Shore Yacht club’s annual sprint across Lake Michigan from Milwaukee, and our goal was the Sylvie Trophy for first-to-finish.  The top contenders for first to finish were a bit different from last year, as unfortunately the Max Z86 Windquest and the VO70 il Mostro were both sitting out the race, but the TP 52s and the Andrews 77 Ocean were on the line.  No matter what, we wanted to post a lusty time.

South Shore Yacht Club moves the Michigan finish for the Queen’s Cup each year; this year, the race re-visited the resort town of South Haven, making this trip 78 miles on the rhumbline.  The race starts in the early evening, with the cruising fleet starting mid-afternoon.  Our start would be with the rest of the multihulls – last – with the forecast calling for a breezy, one-legged reach across the lake.

Our new sails had the battens from our old ones installed, and with our confidence in the old sticks a bit low, we started the race with our foot not entirely on the gas.  We crossed the starting line with a reef and the J2, reaching hard at 21 to 23 knots.  After clearing the multihulls and the first two fleets, we switched to the J1.  Still not satisfied, we declared the veteran battens to be stout enough for reaching and shook the reef and Areté responded, jumping to over 25 knots.

At this point we were carving through the fleet, doing our best to minimize our impact on the boats we passed.  With the cold water temps, spray and wind chill, it was cold on deck but no one minded – after a 9,700 mile delivery, we were finally racing!  As we watched our distance to finish quickly diminish, we realized that if we were to get all seven crew a little helm time, we were going to have to start rotating fast!  After the mid-point of the lake, it began to get warmer, but the wind backed off a bit as the temps rose.  As we closed on the coast, we picked out the finish boat, which had hustled out to meet us and crossed the line in 4 hours, 30 minutes, the first boat to finish.

We nailed our goal, adding Areté’s name to the Sylvie Trophy.  We learned more about the boat – it is an absolute thrill to sail, but we have a long, long way to go before finding all her speed buttons.  In two weeks, the freshwater sailing world’s longest race will begin in Chicago; it’s the 568-mile long SuperMac, and all the big players will be on the line.  We can hardly wait.

all in the family