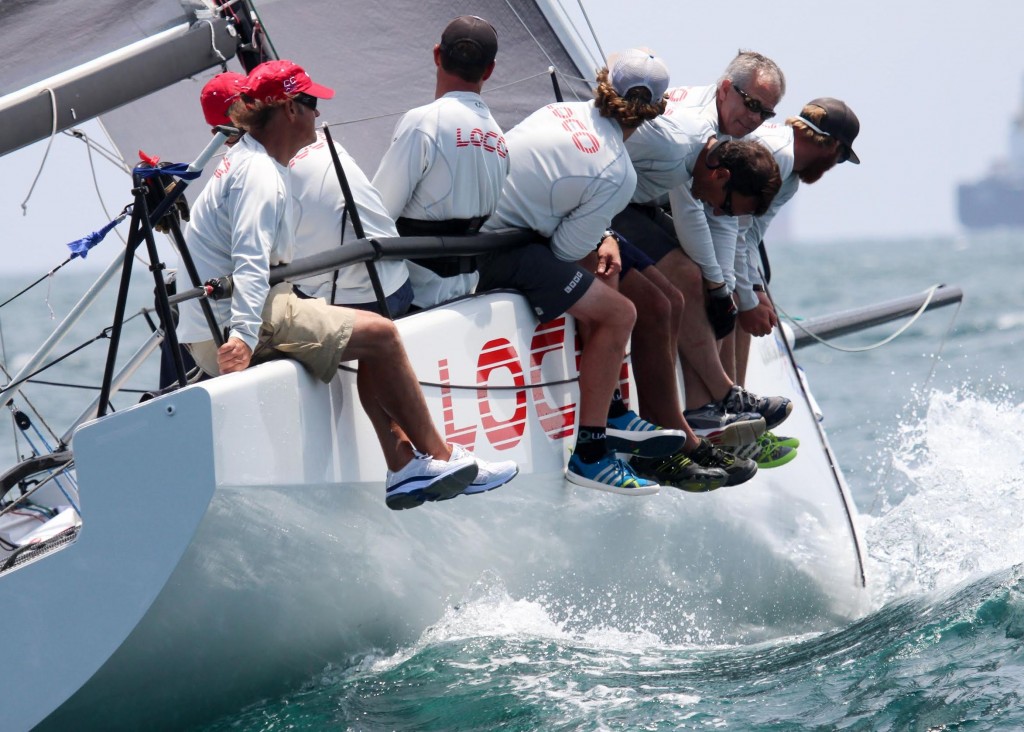 Ullman Sails Long Beach Race Week is usually a reminder of what happens when big breeze and Southern California sailors interact. It reminds us that most of the weekend warriors are not used to much more than the average 10-12 kts that frequent the best coast. Torn spinnakers, ripped jibs, flogging mains and a man overboard rescue were just some of the incidents. Sunday was a bit traumatic for one PHRF boat as they rounded up in a 20kt puff and consequently lost a man in the water. My friend Mark Koski was driving the coach boat for me and was following us downwind when he saw the incident that was happening in the other fleet. He quickly jumped into action and managed to pull the distraught and exhausted sailor from the sea.

2015 found me celebrating my 37th birthday the day before the regatta and Monday I find myself feeling all 37 of those years. My weekend was spent on Ed Feo’s new C&C30 “Loco.” Long time friend Dave Millet introduced the C&C 30 to Southern California and Ed is the first one to jump on this cool little boat. Chris Deenan and Bob (forgot last name) came on and In addition to them I recruited Cody Shlub (who is also going on Transpac with me) and Dustin Durant from the Long Beach Match Racing Team.

There was a sense of optimism even thought this was our first regatta on the boat. That optimism was quickly put in check after the first race. Friday was windy and choppy which was less than ideal for us as we watched boats 10 feet bigger easily crush us upwind. A bit frustrating, especially for Ed who was used to his original Locomotion which was an Andrews 45. Positive side of the first race was turning the weather mark. The C&C 30 is fast and fun off the breeze.

Our frustration was still in full effect as we tried to tune the boat for the wind. The wire rigging was stretching and by the second upwind leg we would be pretty loose so keeping the main full was next to impossible. Eventually this was sorted out and on Sunday our upwind speed was improving. Results for Friday were less than ideal. Even though we finished in third place for race two we ended up in a protest. The typical he said she said thing. We crossed Meridian on port but their crew were quick to freak out since it was close. Thankfully no one is under oath in protest rooms (You can figure that out).

Saturday was more of the same except we won a race. We finally got off the line and held our speed. The wind was really far right so the weather mark was closer to shore which helped us out. The further out the mark was the more chop we incurred. By Sunday we found we could really keep up well in the bottom third of the racecourse. By the top third it was a different story, all together.

The last race on Sunday Ed had had enough and turned it over to Dustin. Dustin really is a good driver especially upwind. He was able to keep the heel angle a little more constant and drove the waves a little better. I found this way easier on the main trim and we were in the hunt after the first beat. Again we passed boats downwind and kept pace through the second leg. On the final downwind we gybed behind the J-111, passed her like she was standing still and caught the other boats. I put us on a good starboard layline for the finish and it looked like we were going to win. I call the gybe and we exit into a crash. Shit! I lost my cool a bit but we sorted it out after a minute and finished third. The round up was a team effort and started when we did not gybe at top speed. Big mistake cost us two spots but oh well. It was just good seeing the boat finally perform upwind.

C&C30 for me is a cool boat. It is called a C&C30 One Design for a reason. In PHRF it is hard to rate. We could probably rate 70 upwind and 25 downwind. How do the handicappers handle that? We had to change some of the systems. Cody made a good comment, “Less Gucci more performance.” We had already bypassed the jib halyard lock that never worked and then had issues with the main one! The jib tack has a ton of friction and some other frustrations arose with the placement of controls. Why can’t I control the jib lead from the high side? It is al led under the deck!

Downwind this boat is so much fun. Everyone back, bow up and go. Smiles on faces and people hooting for us as we screamed by them. We have a little more practice and tuning to do but I think this boat has potential. If you want to see more pictures and read more about our program please click here.

Thanks again to Ed and the entire Loco team. Next stop for me is Hawaii on the J-125, my personal favorite boat. – Keith Magnussen.