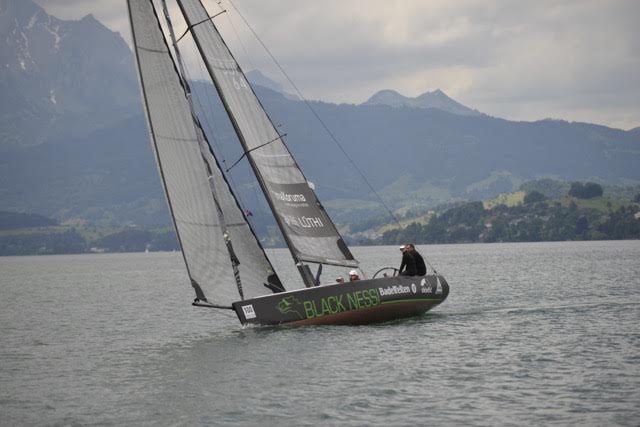 What a moment: together with 500 boats at the starting line of the Bol d’Or – the largest regatta on a closed basin! Ahead of us more than 66 miles of distance to cover. Pascal, our helmsman, got the perfect position with enough space towards the other ships to catch the weak 3 knots of wind and push BLACK NESSI over the starting line at exactly 10:00 am. Using our gennaker, we managed to sail away from the huge pack and despite maximum concentration we were thrilled about our perfect beginning: only one ship in front and almost countless in the back.

Of course we knew it would not remain like this as the multihulls catch some wind on their side of the line. Ladycat with Donna Bertarelli at the helm was the first to overtake us, followed by a dozen of dinghys and helicopters. We managed to defend our excellent position among the monohulls when we catched the first calm spot right at the border to France. Slowly the conditions on the western shoreline improved and the bunch of boats sailing there got on the fast lane. But next to Nernier we also caaught a puff and managed to leave the Petit Lac under Code 0. With a stable easterly of 5 to 10 knots we were heading for Saint-Prex but tried to stay in the center of the lake to observe which side would later develop better winds. We went for the longer option via Lausanne. 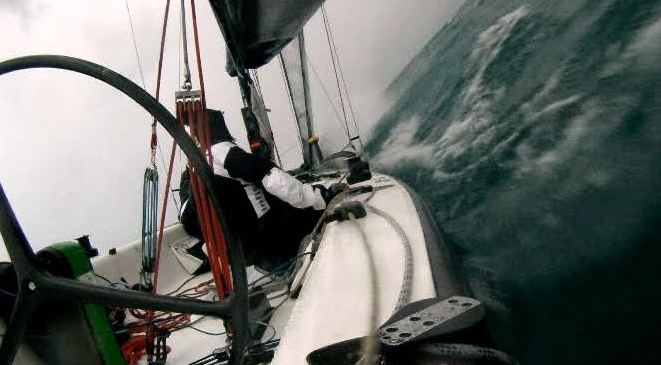 Until close to the city we did very well and it seemed that by the steep French shoreline the boats were falling behind us. But a little more than half way between Lausanne and the turning marker at Le Bouveret next to the entry of the Rhône River windspeed almost immediately dropped to almost nothing. We could not do anything but watching the boats on the french shoreline slip by, one by one. Whilst they profited from an extremely narrow wind strip inshore we could not exceed 2 knots of boat speed. Impatiently we waited for some pressure and almost craved for the thunderstorm which had been developing ahead over the Rhône Valley. Almost there the squalls, whilst heavily turning, hit us with 35 knots. But as the thunderstorm went by we were left with heavy rain and another calm spot right at the turning marker.

We rounded at dusk on position 150. As expected most of the yachts of our class were already well ahead. Obviously discontented we went after them, this time by the french shoreline. Sometimes under gennaker, sometimes under jib or Code 0 we tacked with direction Geneva. Aside from another calm spot next to Thonon-les-Bains we made good progress and reached Nernier at dawn. Back in the Petit Lac we sailed slowly but steadily in the dying breeze, our eyelids heavy as rocks.

We crossed the finish line at the Sociéte Nautique de Genève with almost no wind at all after 22 hours and 36 minutes of racing. . Thanks to our successful hunt on the way back home we managed to at least climb to rank 95th out of 500 boats in our class. Our Conclusion: What a magnificent regatta! – Anarchist Pascal.