oh my little pretty one 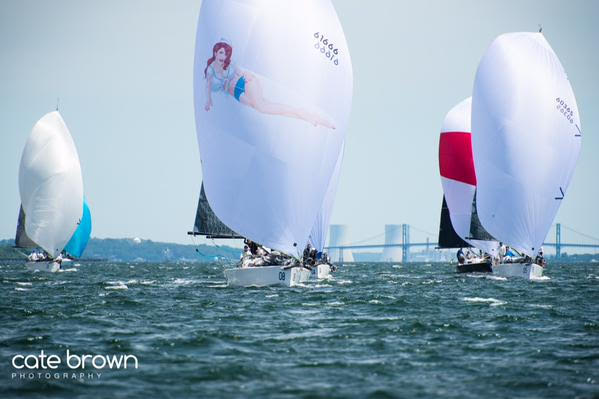 According to skipper George Gamble of MY SHARONA, “the most nervous day of preparation we have had was for the last day of racing of the J/111 Worlds.  The sailing conditions were so variable, we felt anything could happen.  And, with so many boats so close in a breeze that was unpredictable even for local sailors, we knew it was going to be a difficult last day.”

In the end, Gamble and his crew on MY SHARONA demonstrated yet again why they are such a good team.  Never taking any flyers and trying to stay in the hunt, they managed to take a 3rd place in the first race of the last day to seal the deal and win the 2015 J/111 World Championship off Newport.  They did not have to sail the last race.

The weather forecast for the finale on Friday was unusual as a weak frontal system was approaching Newport offering up WSW winds in the 8-12 kts range with the expectation of afternoon showers or thundershowers.  Typically, such forecasts can be way off.  With skies clearing for a period of time, the Newport seabreeze machine asserted itself for a period of time fighting the frontal gradient over the land and nearshore waters.

Ida Lewis YC PRO Peter Garard setup the course east of the R4 red bell and sent the fleet off on their first race on an upwind course of 235 degrees for a 1.8nm first leg- four times around.  The starts were not without a bit of drama and after several general recalls, the final start went off with an “I” and “Z” flag.  Leading the fleet right after the start was Rob Ruhlman’s SPACEMAN SPIFF and after rounding the first weather mark first, they managed to maintain their lead to the finish.  Second was Richard Lehman’s WIND CZAR and third was Gamble’s MY SHARONA.

The final race of the series was even more complex than the first race.  The impending frontal system played games with the winds and an enormous black cloud kept diminishing and reforming over the western end of the course.  Winds varied from 7 to 12 kts and from 235 to 255 degrees.  With an outgoing ebb tide from Narragansett Bay, it was anyone’s guess how any strategy would play out. Ultimately, it was the Brummel/ Henderson/ Mayer team on KASHMIR that won the race, leading wire to wire. Taking second was Marty Roesch’s crew on VELOCITY and third was Carl Desgagnes’ VOLTEFACE from Quebec City, Quebec.

In the end, Gamble’s MY SHARONA won with a 31 pts score followed by the KASHMIR crew from Chicago YC in second place.  Third was Bob Hesse’s LAKE EFFECT from Rochester, New York that normally races on Lake Ontario.  Fourth was Richard Lehmann’s WIND CZAR from Harbor Springs, Michigan and fifth was Rob Ruhlman’s SPACEMAN SPIFF from Cleveland, Ohio.  There’s no question there was a bit of a “theme” here, many of the top J/111 teams were all Midwest/ Great Lakes boats from J/111 Fleet #1 in Chicago and the surrounding area.

Thanks to the Ida Lewis YC, Commodore Gary Lash, and their amazing team of volunteers that helped make the J/111 World Championship a resounding success.  In addition, thanks to the PRO Peter Garard for conducting excellent race management throughout.  Finally, thanks go out to all the sponsors that helped support the event, including Gold Sponsors North Sails and B&G electronics and also Industry Sponsors that included Bacardi, JBoats, MJM Yachts, SEABlade, Quantum Sails and RaceQs.com.  Sailing photo credits- Cate Brown. Title inspiration here.

something in the water