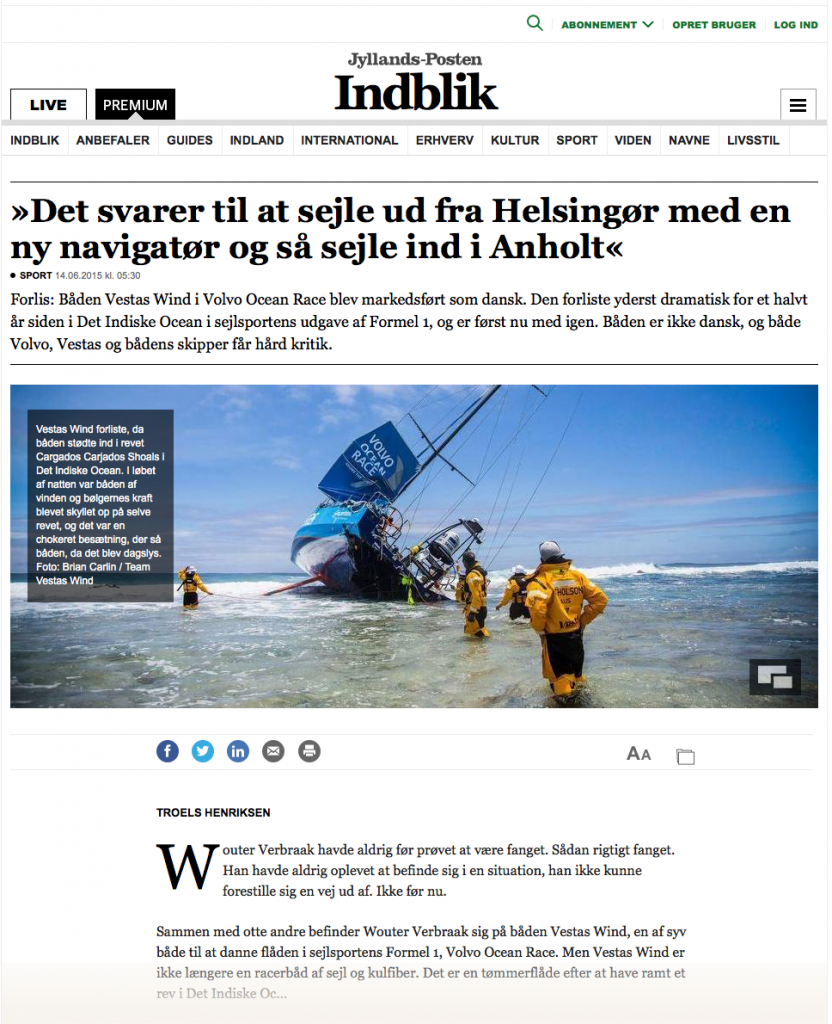 As Wouter Verbraak’s book tour gets underway, Danish newpaper Jyllands-Posten took the opportunity to stir up some controversy about Chris Nicholson’s escaping the TVW grounding without consequence.  We’ve already said our piece about it, but it’s worth having a look at what locals are saying in the title sponsor’s home town; especially about the yacht’s port of registration (Cayman Islands).  Huge thanks to SA’er ‘peterdane’ for the full translation; get into the forum to be part of the debate.

Wouter Verbraak had never before been trapped. Properly trapped. He had never experienced being in a situation he could not envisage a way out of. Not until now.

Wouter is together with eight others on board the yacht Vestas Wind, one of seven yachts competing in what is billed as sailings Formula 1, the Volvo Ocean Race. But Vestas is no longer a racing yacht of carbon and sails. It is more like a timber raft after it has rammed into a reef in the Indian Ocean at 30-35km/h.  Both rudders have broken away, but the boat is not stuck on the reef, it is with the help of the wind and waves being thrown further onto the reef which it has hit 5-10 minutes earlier. Again and again. The impact is huge and it is difficult for Chris Nicholson and his crew to hold on.

The crew tries, but does not succeed to get the boat off the reef. Big waves washes over the boats bow and side, Wouter Verbraak thinks they must be three to four metres high. And as Wouter later says to Sailing Anarchy, “Everything on that reef is there to destroy you”.

The time is just after 19:00 on 29th November 2014. The sun has set and that makes it harder to handle the situation. The nine men cannot get off the boat, the waves are too wild, the surroundings too uncertain.
They call Mayday over the VHF, the local coast guard answers, as does a local fishing vessel. But this is the Indian Ocean. 300kms north of Mauritius, more than 400 kms east of Madagascar.  The fishing vessel says it can only get to them at dawn.

Skipper Chris Nicholson gets hold of Volvo Ocean Race, Race Control. “We are on a reef, we cant get off. We are fucked” says the Australian.
*
The crew survived on what appears to be a Danish boat in the world’s toughest and biggest race, the Volvo Ocean Race. It was “noteworthy” that no one died, according to the 80-page independent report, which was made after the grounding. The report was commissioned by the Volvo Ocean Race and written by the Australian Admiral Chris Oxenbould, the American navigator Stan Honey and the American sailor and lecturer on maritime safety Chuck Hawley. We shall call it the “Volvo Report”.

Jyllands-Posten has looked at the causes of one of the most dramatic events in Danish yachting history after having gotten wind of that skipper Chris Nicholson should have broken Danish Navigation Code and face a fine or 1-2 years in prison. The picture turned out to be more nuanced than that. Nicholson has not broken Danish law, but three experts criticise him, Volvo and Vestas in several areas.  Amongst others for violating the international maritime rules and Vestas’ own Code of Conduct.
Navigator and meteorologist Wouter Verbraak has admitted that he made a big mistake before the grounding. He was, according to three new critics of Vestas, Volvo Ocean Race and skipper Chris Nicholson mistakenly made into the only scapegoat.

“Absolute responsibility “
Unlike the Dutch navigator Wouter Verbraak, it was the Australian captain, Chris Nicholson, who was awake when Vestas Wind hit the reef. He had the watch, and a on boat the captain decides. Nicholson knew this well.
“He was fully aware of its absolute responsibility as the person in charge of the safety of the boat and the people on board,” says the “Volvo Report”.

Yet Verbraak and not Nicholson got fired. By Nicholson. Not by the Australian skipper’s employer Vestas who instead handed the decisions about the consequences for the crew to no other than Nicholson.

“It compares to sailing from Elsinore with a new navigator and sail into Anholt. It cannot be the sleeping navigators error. The responsibility lies with the person who takes over the watch and takes responsibility, “says Philipp Shank-Holm who is one of three critics.  He is an experienced sailor and trained navigator, who has over the last 40 years sailed more than 100.000 nautical miles on the worlds oceans. He has participated in four Admirals Cup’s, used to be deemed as the World Championships of ocean racing. He is one of four people who criticise Vestas, Volvo and Chris Nicholson in this matter. The other three are Campbell Field, Peter Ingham and Fritz Ganzhorn.

Field is from New Zealand and has participated in three Volvo Ocean Races and was navigator in two of them. He was also technical manager for a team in a fourth Volvo  and is a professional navigator. Peter Ingham is a naval engineer and qualified yacht master to the highest level in Denmark, Ganzhorn is director of Sjøfartens Ledere (Seafearers managers), a union for employees in the naval industry. The three has looked carefully into the grounding of Vestas Wind.

*
In June 2014, Vestas gets an offer they cannot refuse. Volvo Ocean Race has an opening in their race and they offer it to Vestas.  “It is by far the largest sponsorship we have ever partaken in… we do it after careful consideration and we know exactly what we want from it” explains Morten Albæk the then communications and marketing director for Vestas. He is telling us about the first Danish only sponsored boat in the Volvo Ocean Race.

*
Many things about the boat is Danish. The sponsor is Vestas, the crew are all members of the Royal Danish Yacht Club. The boat belongs in Tuborg Havn, and Vestas Wind carries a Danish marine flag during training. The boat is 22 metres long and carries a crew of 9.   According to Danish Maritime law, any leisure vessel over 15 metres, but below 24 metres, that sail outside Scandinavia and the British Isles, has to have a skipper with the highest Yacht Master qualifications in Denmark, or equivalent. The so called Yacht skipper 1 exam. Chris Nicholson is the skipper of Vestas Wind, but he has no such qualification.

One would therefore think that the “law regarding the ships crew” that includes all Danish vessels apart from combatting ships and crew carrying vessels had been broken. The responsible would be the skipper, Nicholson and the owner, in this case Vestas, according to the Maritime Agency. If the law was broken, those responsible would face imprisonment for one year and as well as fines. The punishment could increase to two years if the breach was intentional and with gross negligence, and if an economic gain was gained or intended, hereunder also a saving.

The requirements for qualifications of a skipper is much more lenient in the Cayman Islands than in Denmark.  According to the authorities on the island, Cayman Maritime, the owner of Vestas Wind, VFS Commercial Services just have to ensure that the yacht is appropriately crewed.

The registration in the Cayman Island is criticised by Fritz Ganzhorn from Sjøfartens Leders. He gives a comparison: “If you board the DFDS boat to Oslo, you have faith that it is in fact a Danish ship. We can see the Danish flag, it has Danish crew and we have an expectation that Danish rules are being followed. It would create an uproar should we find out that the boat to Oslo was in fact a Cayman Island boat and therefore could adhere to a lower standard of qualification of the crew”
*
The challenge to get to the start of the race is enormous for Vestas Wind. Never before has a boat had such a short preparation time for an around the world yacht race. The minimum requirement is that each boat has to sail 3700nm non stop on the ocean before the start of the race, and be in Alicante, Spain, by 9AM on 8th September 2014. Vestas Wind can just manage a continuous week at sea before they arrive in Alicante just hours before the deadline. As a comparison, Brunel has sailed 30.000 nm and Team SCA has more than ten months longer preparation time than Team Vestas, and several boats sail across the Atlantic and back. This short preparation time is in the Volvo Report named as one of the causes behind the grounding of Vestas Wind. “We did not have much time with Vestas, so we did not manage to do all the preparations” said Wouter Verbraak when he held a talk on amongst other things, the grounding, in Denmark on May 5th.
*
Volvo Ocean Race’s Managing Director Knut Frostad says regarding the registration in the Cayman Islands: “It is one of the best places to register larger sailing yachts. They don’t have as much bureaucracy and it is a fast registration with low fees. Cayman Islands have also got a good legal structure, which is important to the owner to safeguard their values” explains Frostad, and he denies that the registration has anything to do with avoiding the stricter Danish legislation.  “There is nothing illegal in this. I can understand that some think that the boat should be registered in Denmark when you have a Danish team, but I dont agree with them. There is no law saying that you should register a boat in Denmark because the main sponsor of the boat is Danish.”

Unethical and bad business moral
The registration is met with criticism.
“It is unethical and bad business moral to have a Danish sponsored boat, representing Denmark in a race, and then behind the scenes have it registered in a country that significantly reduces the safety of the crew due to very convenient rules regarding the qualifications of the boats skipper and navigators”, says yacht master teacher Peter Ingham. “You proclaim to the whole world that we have a Danish yacht, with Danish crew, sponsored by a Danish company and then it turns out that they mislead people to think this is a Danish boat, but in fact, it has nothing to do with Denmark. Nothing” explains Ingham.

Read the full translation in the thread here.

the name of the game