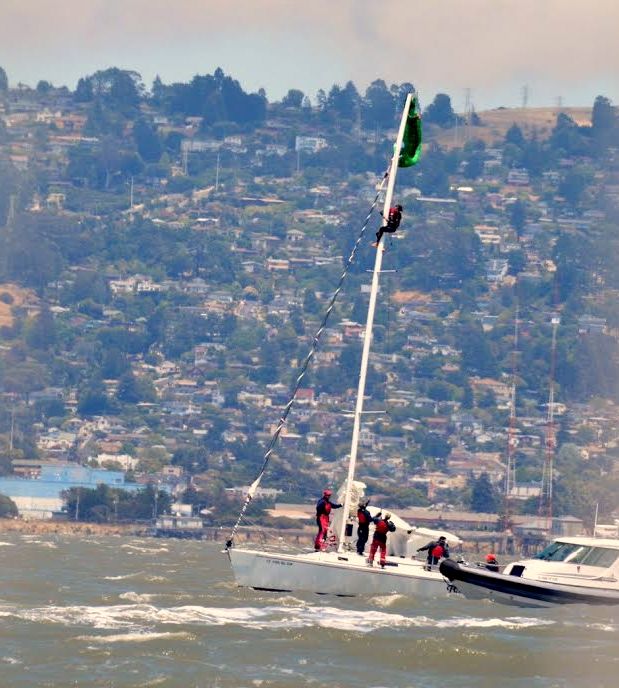 SF Bay Challenge: take the biggest windward leeward course you can fit on the San Francisco Bay and the 2 fastest board sailing classes, add lots of wind & tide and what you get is no less than a spectacular weekend of racing from the city front down to the Berkeley pier and back.  The foil board kite surfers we’re going to dominate. No question. That is if they could keep themselves out of trouble.

As for getting down to Berkeley and back on a foil board. Simply not possible at this point. I’m lucky to make the leeward mark on the foil Kite board. I rigged Avanti 10 & ml89 + 64 Kashy fin for the breeze and flood tide. Good start with speed 1/2 way down the line. I tacked and rounded closely in 3rd behind Xavier on 9 & Tom in 9.3. The bigger sail was beginning to pay dividends at the top of the course. I even extended the lead past Alcatraz & got going very deep and fast but at that point the foil lie boards were gone. The Ml 89 cm mini formula board has a great range but 10 was becoming all too much in the middle of the course in the steep chop and gust approaching 30k. At the leeward mark, Soheil, Eric and Jean had all made their move as I was in survival mode.

Back up wind I was taking a beating. Port tack was straight into 3-4′ breaking sets on the Berkeley shoals. Meanwhile, pictured above, Johnny Heinekin took himself out from the lead by wrapping his kite in the mast head of an approaching J105 fleet of Angel island. He managed to climb the mast and dislodge his kite from the rigging but was out of the race. I stuck to the city front which was the wrong side as there was no relief from the flood. It took 3 long tacks to get through the city front gap at Alcatraz. On top of that the SW gust were spastic and unreliable.

Eric who split tacks and stuck to the north side of Alcatraz challenged Tom and Xavier who battled to the city front. At the end it was the foil kites who dominated in just under an hour and the windsurfers in at 1:25 as Stefaans took the line honors with Erika Heinekin just behind in 2nd. Huge thanks to the St. Francis YC & their volunteers for a great weekend of racing. For the complete weekends results and report head to www.stevebodner.blogspot.com.

(now) born in the usa