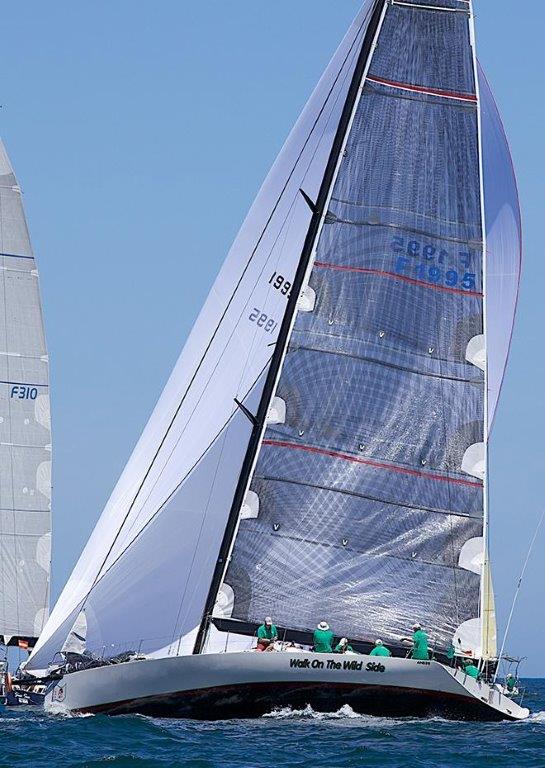 The Fremantle Bali race 1440 miles is finishing up, unfortunately for a variety of reasons a few boats will not finish some due to damage early on in the race and others due to the very large high that filled in the race track.

I joined Garth Currans twenty eight year old Inlgis 57’ Walk on the Wild Side for this event. The boat is what I am sure must be one of the last wooden race boats of this size ever built. I found it amazing to see the detail of the workmanship in this retro rocket. After 48 hours of racing we were still in front of Indian a recently launched Carkeek 47’. The boat was performing like a dream under A-sail and flying along. I could not help but think of Howard Hughes and the Spruce Goose sitting in a museum somewhere.

The race start was thankfully by a well organised race committee delayed 48 hours due to 40-60 knot head winds. We finally started on the Monday morning in a 15 knot south westerly. The western Australian coast provided the usual strong southerly headed currents kicking a nasty sea way up for the first 48 hours. During the first 48 hours we were praising the accuracy of the weather models. This all changed once we left the Australian coast and made the 700 odd mile dash for Bali. The holes were plentiful but at least we had a lot of Whale watching and fantastic sun sets with perhaps if we were behaving a wee sun downer.

The race was won on Line and IRC by Indian finishing 14 hours ahead of us on the Wild Side (lovingly now known as the Spruce Goose) Walk on the Wild Side finished up 2nd on line 1st on YAH (Aussie for PHRF) and second on IRC.

Thank you to Garth and the team for the Good times and the Fremantle Sailing Club for putting such a well organised event to a beautiful part of the world.