challenge of the ancients 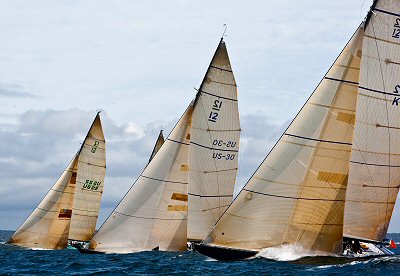 Tom Ehman’s Golden Gate Yacht Club Challenge already made its first political change – it’s now known as the SF Yacht Racing Challenge to keep from pissing off the rest of the Bay Area clubs.  One sneaky anarchist attended an Ehman presentation about this ‘outside the box’ event for the age-advanced, and here are the details we’ve scooped up:

+ The new class will be known as Super 12s, and will be more of a ‘Spirit of Tradition’ version of a 12 rather than a real one.  A Grand Prix (post-1983) 12 above the waterline, a modern fin-keel yacht below. Carbon-composite hull, deck and rig.

+ Strict OD including deck hardware and sails (lesson learned from Volvo) for the obvious cost savings, as well as to make it a crew contest, not a design/budget battle. Draft will be under 10′ – they’re shooting for 9’5″ – both for access to area clubs and to commercial yards.

+ Boats are expected to be convertible to a charter life after their competitive lifespan ends.

+ Crews will have a strict nationality requirement (passports?) as well as an interesting diversity requirement: each crew will need to include a minimum of two women and two men as well as two aged 22 or younger, and one aged 62 or older.  College sailors should be eligible through their senior year, and the total crew size will be 12.

+ Fleet racing and match racing finals will take place on the San Francisco city front for 2 weeks in July, when average afternoon (1300-1800) wind speed on the Bay is 13kts or more virtually 100% of the time (13-30kts). There will be no upper wind limit; lower wind limit of 5 knots or so, though stats say it ain’t gonna happen much, if at all.  “Hell or high water” is what we were told.

+An East Coast venue will likely come into play within the first couple of years, and our guess is an obvious one: Newport.  We can see Annapolis trying to regain some of the luster they’ve lost as one of America’s real sailing cities…other than that pesky problem with having breeze.

+The boats should cost somewhere between 2 and 3 million, and the campaign another 500k to 1M.

Several Italians are apparently quite keen; we’d hope to see Vincenzo and Patrizio back in the kind of racing they both enjoy.  Here’s an Italian take on it.

this is not hard people