SCOTW Aly Di Nas tells us about her first time… 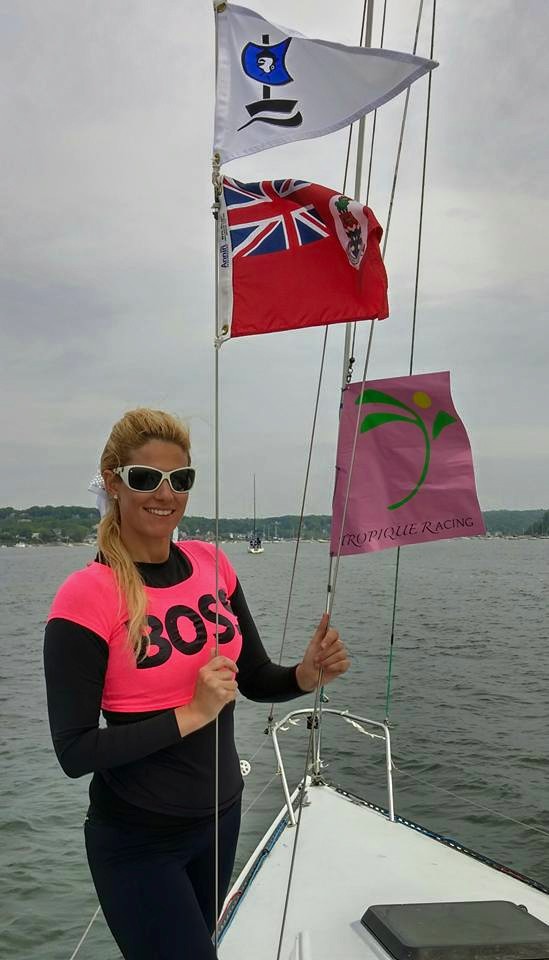 In these moments of sailing being a “dying sport”, there’s lots of discussion about how to get people who left the sport to come back to racing. I’m one of those people who came back, many years after fleeing quite possibly the worst junior sailing program ever. I’ve been through various positions on the boat, took up residence on the bow, and even became a boat owner (not yet holding title to a Wally, but I inherited a JY-15 for frostbiting).

Since I got the dinghy, many people have insisted that I should be driving. I’ve resisted because I like the front of the boat, and driving just seemed like it was meant for someone with more of a clue. This past weekend, I finally caved to pressure and chartered an Olson 30, which I entered in a favorite local regatta. I’ve driven in a few women skippers races, but this was my first time at the helm in the co-ed real deal.

And wouldn’t ya know it… I managed to win a race! Sorta by a mile and kinda up in the fleet ahead of mine, because I’m awesome like that (or I just got really lucky. Probably really lucky). We ended up in third overall, but I think I’m over my helm phobia. For the benefit of others who may be returning late to the sailing game, a few things I learned the process:

*Tactics & Instinct: It takes a really long time, when you don’t have the benefit of sailing instructors and daily debriefings on the white board, to learn rules and tactics and reach the point of trusting your own instincts. As learning to read the wind, predict shifts and make tactical calls was a gradual process, it has always been easier to defer to others’ judgment on the boat. I was doubtful enough of my abilities that I actually passed on taking the helm in the first race.

I’m so used to assuming that someone else knows better, and the epiphany of “wait a second, I can probably do this” only came as I was on the bow in the first race. I watched two other boats tack around and make their way below us as we approached the boat, forcing us to bail out behind the boat and start late. As I stood on the bow, assessing defenses and signaling my helmsman in hopes we’d not let them get under us, it clicked with me that I had known exactly what to do in this situation and I could probably trust myself to have the right answers (even when I only had seconds to make a decision). Reaching this realization, though it came too late for race 1, was extremely gratifying.

*Getting the right experience can be very difficult without a structured program. Basically, the only way to learn once you’ve aged out of junior sailing eligibility is to go race on someone else’s boat and learn by doing. You won’t always get the opportunity to do what you want – I moved off a much beloved boat with a crew I adore because I really wanted to move up to foredeck and knew I’d never take that spot at expense of their existing, extremely talented rockstar bowman. If you want to learn to drive, options get even more limited. Few owners will pass the helm over to the crew, especially if you’re a newer crew member. But, since the only way to learn is to do, I highly encourage creating your own opportunities. Find a boat to charter or borrow, or buy your own dinghy. Then you need….

*Good friends: I’ve been lucky to find several excellent mentors who have spent countless hours explaining sail trim and tactics and rigging to me, even answering frantic questions sent by text in the pre-start (that’s right – I sent a text during the pre-start. Go ahead and scold me). Not only have these people been instrumental in filling in the “why” behind everything I was doing on the boat, but they’re the ones who came through for me and made this whole weekend possible.

When I chartered this boat, it was on the hard under a tarp, mast down and hull rather stained, with a questionably winterized outboard in the cabin. One of my friends worked tirelessly for two days to get the boat launched and rigged while I remained trapped at work, and another drove several hours just to help me assess the boat and begin prep work. I owe Peter and Brook massively, and I can’t believe they’re still my friends. Even *I* would’ve told myself to go fly a kite by now.

*Shitters: You really do not need the newest, most awesome carbon fiber sled to be competitive in this sport. My little Olson was built in 1981 and has certain sails that sound a lot like rice krispies when they move, but she was still fantastically fast, and we were very competitive even with the newer boats. Don’t be afraid to get out there in whatever it is you can afford. We’d all love to show up in a glittering new carkeek but I’d be willing to wager it’s just as fun to win in a “shitter”, as my pro sailor friends would call it, as it is in a newer boat. If I ever win on something new, I’ll report back and confirm.

A special note of thanks: I obtained Mousse through the generosity of Oakcliff Sailing Center, and the staff there provided us with a metric ton of assistance from some truly wonderful, generous people who provided the boat and a very talented, motivated staff who provided priceless assistance with launching and rigging. In particular, thank you to Bill Simon, Ladi Oguntoyinbo, and Sean and Kilian Duclay, for all of your assistance. Massive thanks also to John McGrane and his Oyster Bay Marine Center for finding time to launch the boat and Sewanhaka Yacht Club for agreeing to donate their hoist. Above all, thank you to Peter Huston for being my mentor, tactician and glorified boat jig – I never would’ve had this much fun at the helm if it wasn’t for all of you.