After a couple of years away from the island, I was pleased to get such a warm welcome from the folks in Antigua for this year’s Antigua Sailing Week.  I was even more pleased to see that Antigua – the granddaddy of the Caribbean regatta scene – is among the first in the region to recover from the serious fleet damage done by the GFC.  Like all the historic Caribbean regattas ASW is well down from its highs, this year saw 118 boats on the line in a wide stretch of handicap and charter classes.  That’s 15 more than last year, and double-digit growth is nothing to sneeze at these days – especially with Les Voiles de St Barths skimming off the top spenders in the fleet.

ASW’s secret is that there is no secret at all; just common sense, hard work, and a great sailing venue.   To wit: 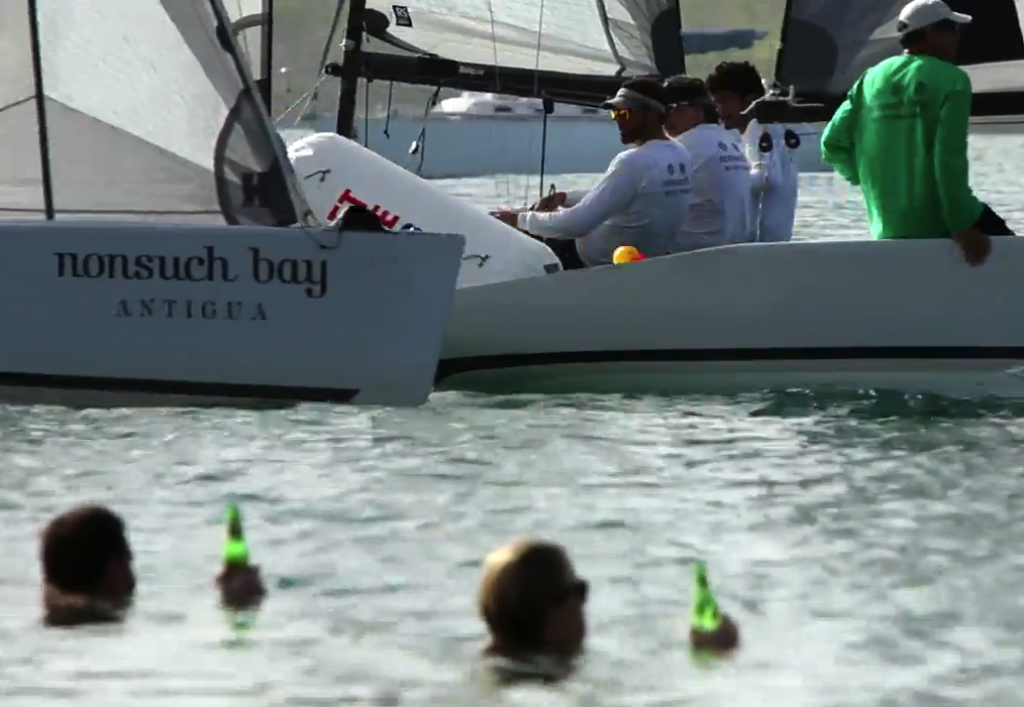 The format is widely lauded as perfect; a full week of mostly short-course racing split up by a layday with a huge beach party and stand-alone spectator-friendly regatta.  For folks who want high-intesity, windward/leeward racing, Antigua is the best of them all, with laid marks and 1-2 hour courses taking up the majority of the week’s racing.  Unlike with the long, lazy courses at Les Voiles de Saint Barth or the Heineken, when you hit the daily beach party at the end of the dock, you know you’ve earned he right to drink to excess (or eat fresh sushi prepared right at the Club!)  And with ASW providing the final ‘jumping off’ point for many of the serious charter and private racing yachts headed back to England for the Solent racing season, the competition – especially in the 40-foot range – is absolutely fierce.  That’s maybe why we love the regatta so much; like very few others, it has a great balance between hard-ass racing, non-stop shoreside partying, and family-friendly fun.  And with a consistent crew of media and video staffers who put together the video above, they’ve been good at sharing it with potential customers.

Owners and boat managers dig it because yachting infrastructure is substantial on the island, thanks to a combination of investment in facilities, private and governmental recognition of the sport’s economic value, and a seriously forward-thinking Yacht Club and National Sailing Academy.  For years they’ve been teaching locals to swim and then teaching them to sail their way into a fun and typically well-paying career working with sailing and powerboats, and it seems like everyone on the island has a brother or cousin who works on boats.  Don’t underestimate the power of friendly locals; few things make competitors want to come back more than feeling truly welcome.  Regatta organizers run huge parties for both racers and locals, bringing in bands like Steel Pulse and endearing the regatta to thousands on the island.  Thanks to this cooperative arrangement, everything is easy compared to other islands, and finding someone to sort out repairs, electronics, sails, carpentry – even carbon work – is possible with a few phone calls.  All in all, this place has what a race team needs.

We’ve only got two issues with ASW, and with their new partnership with Sailors for the Sea and their long-running deal with the Rubber Ducky Recycling nutters, we hope one will be solved easily; that’s the ASW association with Day Sponsor Yida International, the Chinese developer of a massive new resort that may seriously harm some of the most important coral reef ecosystem in the area.  Yida’s VP allegedly went on an alcohol-fueled rant against critics of the project at the regatta’s closing ceremony last week, but it was an unnecessary rant – the real economic reality on the island means the resort if a done deal.  Ppposition to the plan has been easily quelled with promises of prosperity and jobs; that makes it even more important for organizations like ASW, the National Academy, and the AYC to advocate for development that protects these crucial resources for generations of sailors and fishermen to come.  And that means not accepting sponsorship from a company that’s not doing anything to help.

The other criticism of ASW may also be easy to solve; the regatta is just a little too late in the season, and many potential US boats have already headed North.  Many potential charter crews are already sanding and painting their own hulls back home.  The Caribbean is a winter circuit, and this one is just a little too springy for most people we spoke to – a couple of weeks would definitely increase participation from this side of the pond, at least.

With those two caveats, we can heartily recommend ASW for anyone looking for real, hardcore, caribbean racing and partying.  Watch the full video edit above for a report on the week, and for bikinis, barbecue, and Clean on commentary (as well as some good enviro-reporting), watch the Nonsuch Bay RS Elite Challenge Regatta video here.

Screenshot of spectators cheering on RS Elite teams from inside the zone comes from Acqua Films/Roddy GG.  Those of you patiently waiting for my Gunboat G4 foiler report and video, sit tight.  It’ll be worth it.