the show goes on 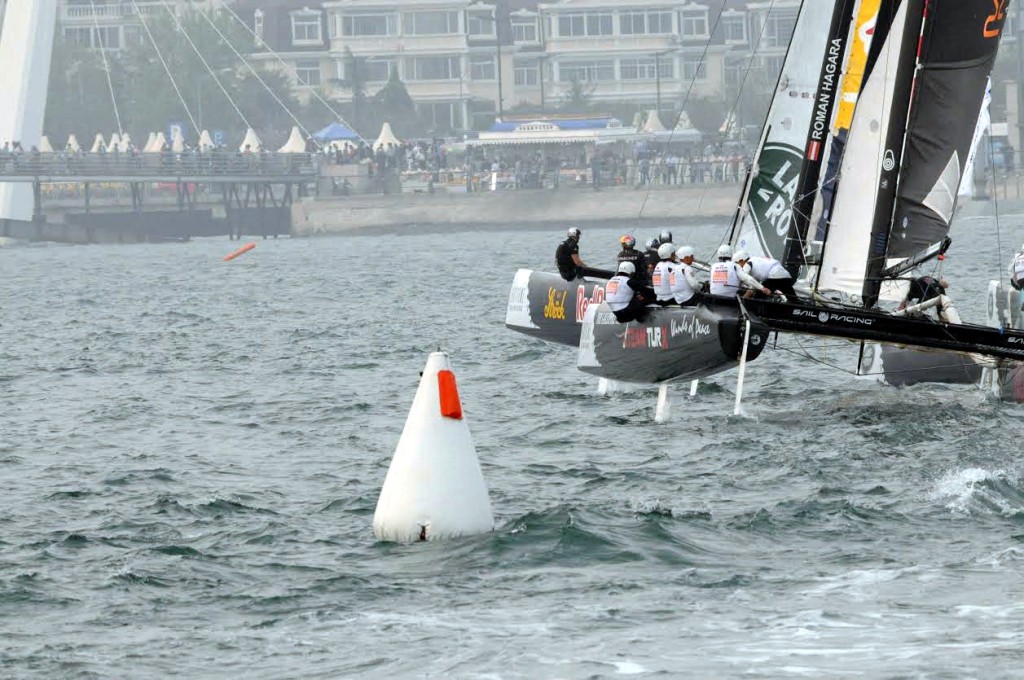 The 3rd Act of the 2015 Extreme Sailing Series held in Qingdao over the May Holiday weekend had everything from a day lost to fog to gusts around 20 knots channeling through the tall buildings on shore giving not only the sailors a challenge by Race Director Phil Lawrence as he attempted – and succeeded it has to be said – to lay fair courses for the competing yachts.

Three teams, The Wave, Muscat, Team SAP Extreme and Team Gazprom went into the weekend on equal points so it was all to play for, especially for these guys.

SAP came out of the gate with their tails on fire and dominated the first day of racing, after 7 races they had banked 62 points from a possible 70, leaving everyone else to play catch up and while there was none of the crash and burn that we so often see with the eXtreme 40 catamarans the wind, which had more holes in it than a string vest proved to be as frustrating as a the game of snakes and ladders it sometimes was.

In addition there appeared to be very little pattern. The right would be favoured one round while the left the next with sometimes boats flying a hull within a handful of boat lengths from those parked up in no breeze but, as usual at the higher end, there were those teams that found a consistency that brought them to the top of the table.

SAP entered the final double points race with a comfortable cushion over Gazprom with The Wave, Muscat a few places further back. Leigh MacMillan did the only thing he could and went out an won the final race. As it turned out by a large enough margin to pip Gazprom for the second podium place but SAP’s margin, which was an 8 position cushion was really too high a hill to climb.

Not only did consistency prove the key here in Qingdao but across the series with events in Singapore, Muscat and Qingdao now sailed SAP tops the leaderboard (28) by one point from The Wave, Muscat (27) while Gazprom’s poor showing in Muscat leaves them in 4th place (18) behind Red Bull (25) but the top three teams are starting to edge away from the rest of the teams overall.

The boats are now off – unlike OC Sport’s other big event running at the moment, Dongfeng Race Team – in containers for the next Extreme Sailing Event in Cardiff, UK. – Shanghai Sailor.