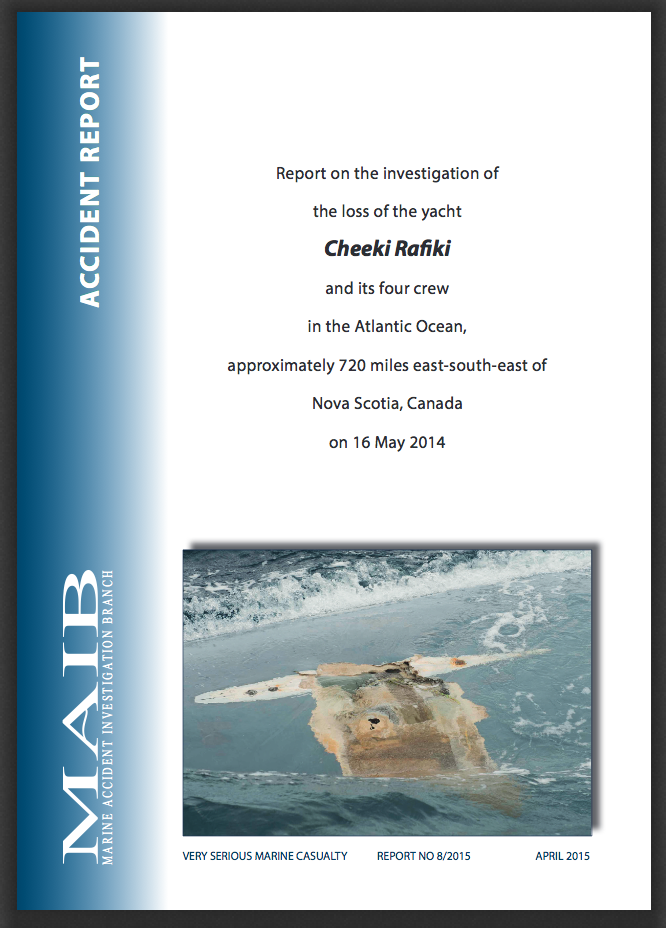 Just a year ago,  the charter-racing Beneteau 40.7 Cheeki Rafiki was enroute the UK with four souls aboard after a long and fun 2014 Caribbean racing season.  It was a typical delivery until a personal EIPRB signal – and no further contact – was received.  After extensive searches the hull was found, but the crew was never seen again.

Today, the UK Marine Accident Investigation Bureau released their full report on the loss, and as usual, there’s plenty of good information in it for all of us, and in an age where keels are less and less reliable, it behooves us all to pay attention to things that make them fall off.  Read the report here, and below is a statement from Chief Inspector.

This has been a challenging investigation. Cheeki Rafiki capsized and inverted, almost certainly as a consequence of its keel becoming detached in adverse weather, in a remote part of the North Atlantic Ocean. Despite two extensive searches, its four crew remain missing and, as the yacht’s hull was not recovered, the causes of this tragic accident will inevitably remain a matter of some speculation.

Nevertheless, a thorough investigation has been conducted, that has identified a number of important safety issues, which if addressed, should reduce the likelihood of a similar accident in the future.

The investigation has identified that in GRP yachts that are constructed by bonding an internal matrix of stiffeners into the hull, it is possible for the bonding to fail, thereby weakening the structure. In some yachts, including the Beneteau First 40.7, the design makes it harder to detect when the bonding is starting to fail. The report therefore highlights the need for regular inspections of such yachts’ structures by a competent person, and for the marine industry to agree on the most appropriate means of repair when matrix detachment has occurred.

During the investigation it became clear that opinions were divided as to whether or not Cheeki Rafiki’s return passage across the Atlantic Ocean was a commercial activity. I have therefore made a recommendation to the Maritime and Coastguard Agency to improve the guidance on when small vessels are, or are not required to have commercial certification. This should help resolve what has, for too long, been a grey area.

Finally, I hope that this report will serve as a reminder to all yacht operators, skippers and crews of the particular dangers associated with conducting ocean passages, and the need for comprehensive planning and preparation before undertaking such ventures. On long offshore passages, search and rescue support cannot be relied upon in the same way as it is when operating closer to the coast, and yachts’ crews need a much higher degree of self-sufficiency in the event of an emergency. Thus the selection and stowage of safety and survival equipment needs to be very carefully considered before embarking, together with options for contingency planning and self-help in anticipation of problems that could occur during the passage.

too much of a good thing