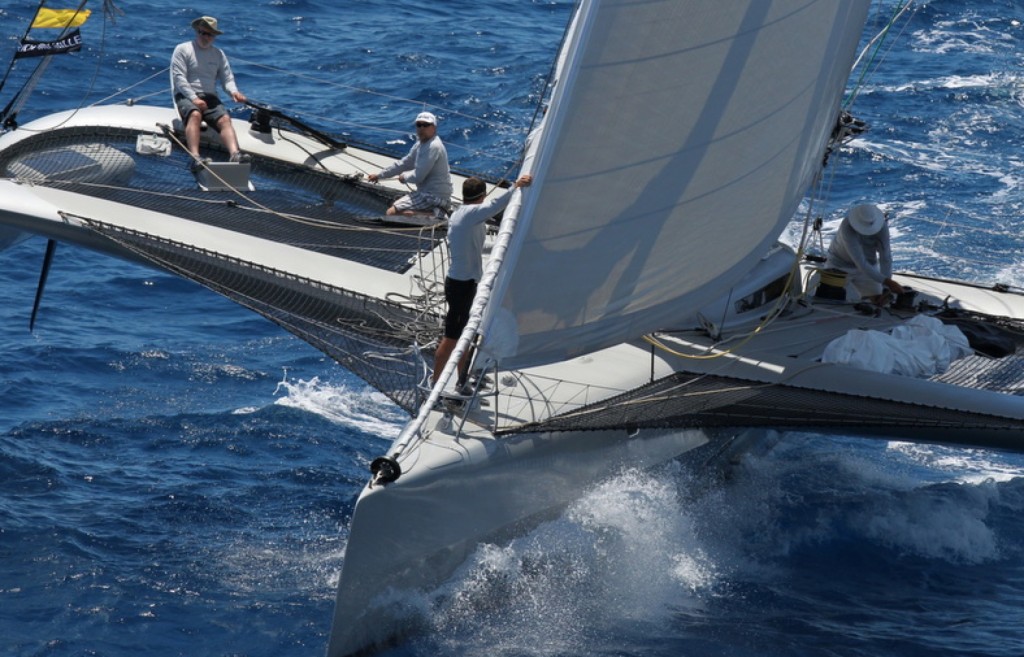 If we’re talking about foilers vs. floaters and record-breaker monohulls vs. the rest of the world, we must be talking about Saint Barth, and outright World Sailing Speed Record holder and longtime SA’er Paul “Larso” Larsen checks in from the ORMA-60 inspired racer/cruiser Paradox at Les Voiles.  Most of the chatter from St. Barths can be found here.

It was an interesting day with a wide range of conditions. Big, heavy rain squalls coming over the island on the preceding night with big calmish periods afterwards.  We put the Code Zero on the boat in the morning in prep. Another big squall washed over the fleet during the start sequences for the first classes (we were last off after the big Maxis).

Loick Peyron sailed on Phaedo today, but with big wind shifts and start line corrections, her timed run didn’t really work out. They haven’t really appreciated our “high mode” off the line previously so we considered that with Loick potentially changing their gentle start strategy (and with their handicap and speed they can afford to be gentle), I was worried they might try and get under us and squeeze us out at the start. Loick helmed our first start masterfully the other day… so full respect ( he’s done some other s**t too, apparently).  Anyway, they were miles late.

We started mid line on a fairly even line and were happy with clean air and options. The chartered GB62 Elvis [world champ owner Jason Carroll is racing his Viper 640 in Charleston -ed] made a good start to leeward of us and we had the GC32 and G4 back and to windward. Phaedo tacked off once across the line and took a long beat out to sea (East) whilst we went in towards the island shore. I think we did pretty well to ride through the lulls and gusts. We sailed over the GC and the G4…which are just not that fast upwind yet. I fully respect the challenges of Mk1 development and I’m really enjoying watching this one done to this high level. It seems like it’s being sailed very well. Putting it around a course not of your choosing really highlights the reality of the compromises though. The fact is, your dragging a lot of excess up the course with you. We had full main hull-flying conditions up the shore from time to time (not so easy on Paradox i.e. 19-20 knots) which were followed by 10 knot lumpy stuff trying to lay the top of the island. We weren’t that far behind Phaedo when they hit the layline but they just tear chunks out of us when it gets lighter. They are two tons lighter with much more sail area and are only getting better and better with the tools.  Things even up a little more as it gets stronger (handicap wise at least). 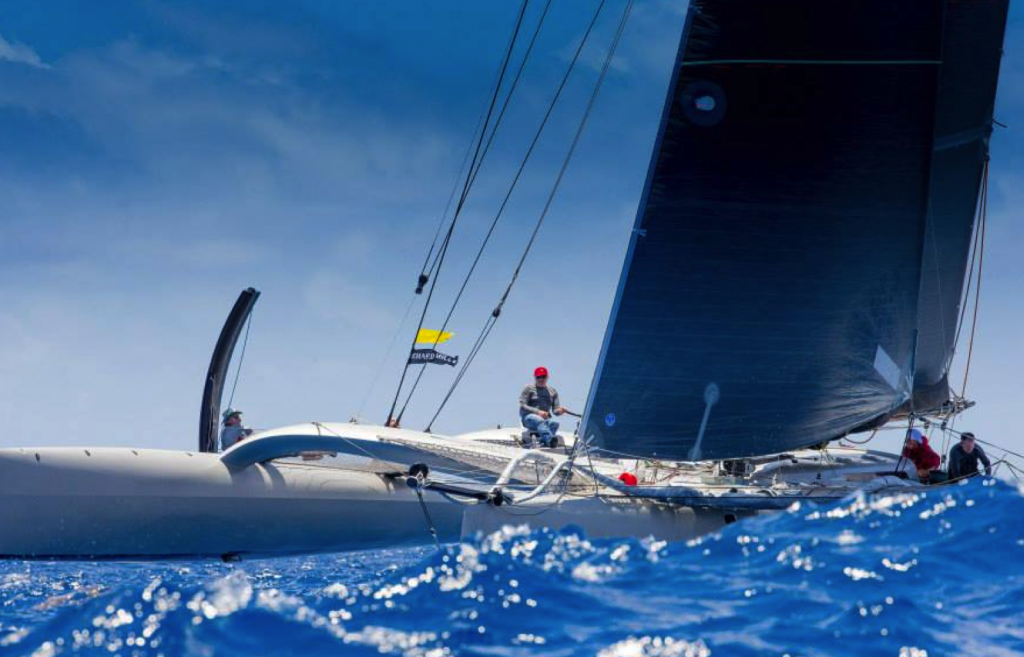 We had managed to also put good distance between us and the GC (which was sailing under full rig today). I think Elvis may have been ahead of the G4 on this part of the race. The next short reach had us debating whether to hoist the zero or stay with the solent and peel straight to the big gennaker at the corner. We chose the latter but hated the short period sailing undercanvassed. We chased down “Lucky” on the next downwind, but it took a while in a light spot.  The GC joined us on the leg, promptly jumping onto foils and sailing away from us faster and deeper on a long starboard gybe. We sailed against two of the quick foilers in last years RTIsland race and we know how quick they can be! We were sailing pretty clean but they gracefully sailed through. We couldn’t even see who was fourth.

On the following beat we were still in touch with the GC, past Lucky and chasing Lupa. We got to watch the G4 heading downwind. It looked like hard work in the marginal foiling conditions (i.e. sailing whatever angles it takes and trying everything to get on the foils). It wasn’t a good day for a heavy foiling boat!  We rounded the next mark still behind the GC and cracked off onto a tight reach which turned into more of a beam reach. The wind had finally returned so that we had full foil down and could sit around 20-23 knots. We caught up and passed the GC pretty quickly… but it was obvious they had some problem on port tack. They should have been smoking us, but were still lowriding.  Anyway… as they say in the classics… “stiff s**t”:)

So we pushed on, rounded the island further and went to the big gennaker/staysail combo. The GC came around the corner, gybed onto starboard and sure enough… popped onto the foils and took off again. We could see Bella Mente parked up in the distance and knew the race was far from over. There was one mark to round before the 3/4 mile or so beat up to the line. It all looked very light and random in there so we stood offshore.

The GC had overtaken us again and the big Swan Odin had somehow managed to slide down the inside gifted by it’s own personal breeze. We stayed away from the mass of boats as we sailed from one swirl of wind and velocity header to the next. Somehow we rounded the mark just ahead of most of them and then fought our way upwind finally using the 0 in anything from 5-15 knots of wind. After a long period in those super light and fickle conditions we knew the handicap was a lottery but were very happy with the way we sailed through the bunch to claim our own little victory. The GC was a wounded bird so no big conclusions can be drawn there. Phaedo is in another league and I have no idea what they experienced at the finish. Elvis sailed very well and the G4 was a long way back. The G4 really is an interesting boat… so was the Hobie/Ketterman tri-foiler. I’m glad both of them exist. So basically, there was a lot of randomness on todays course. It’s a great course and event and a very interesting collection of boats. I’m very much enjoying sailing on Paradox. She’s a great ride.

scraping through on the smell of an oily rag

put a fork in it