there can only be one first 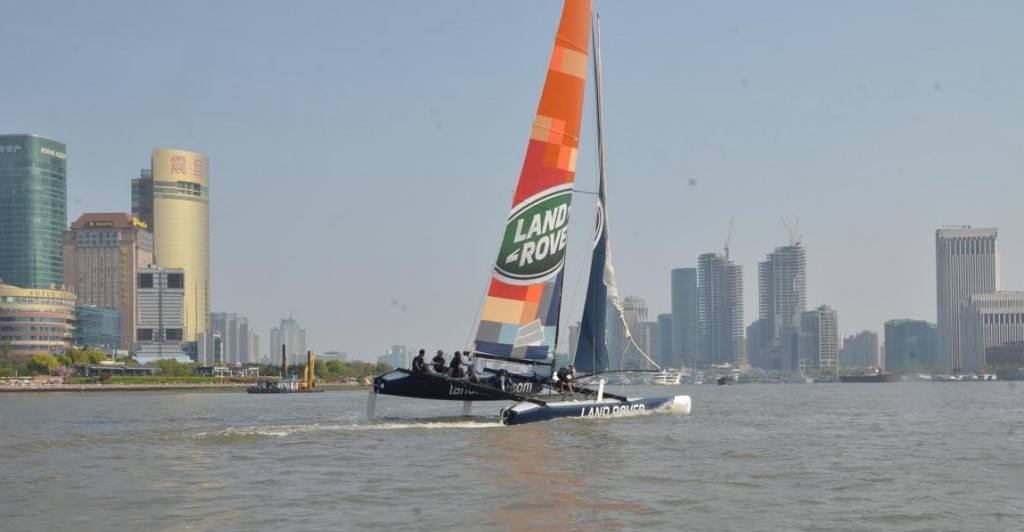 If someone told me even a couple of years ago that we would see a full on professional racing boat on the Huangpu River in Shanghai I would have laughed at them. If they then told me it would be a 40 foot catamaran right off Shanghai’s iconic Bund in the heart of the city I would have doubled up. Well it is a good job I didn’t say I would eat my hat or right now I would be reaching for the salt and pepper.

As a result of cooperation between the China (Shanghai) International Boat Show, OC Sport and the Extreme Sailing Series sponsor, Land Rover, this weekend there was an eXtreme 40 catamaran sailing on Shanghai’s mother river. They didn’t even shut the river to the normal traffic. This meant at times it was like a pedestrian at a busy corner waiting for the green man to come on but the team from OC Sport clearly knew what was needed to provide a calamity free weekend.

And not just a poodle about out of sight of the public way up river. This was in the heart of one of the powerhouse cities of the world on a waterway that looks like a waterborne highway at rush hour. They say around a million people, locals and visitors alike take a stroll along the Bund at the weekend so doubtless many thousands received a visual treat they could hardly have expected.

It was quite a sight with the early 20th Century Bund to starboard and the ultra modern 21st Century Lu Jia Zhui financial district to port and as Team land Rover passed the legendary Peace Hotel they flew a hull as if to say “We’re enjoying this too”. So the mold is broken and a professionally crewed racing sailing boat has strutted her stuff in front of the Shanghai Sunday afternoon promenaders. In a small way, history has been made. – Shanghai Sailor.