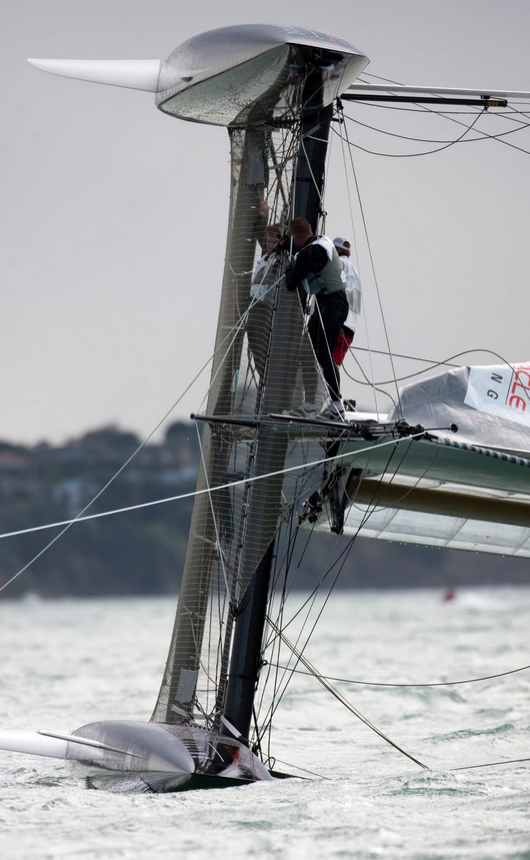 Longtime SA’er and A-Cat, Moth, and 18 footer sailor SimonN begs for it, though the vote is already likely over. Agree or disagree?

I know that members of a number opf teams read this forum, so i address this to them in the hope of avoiding what i believe will be a disaster for the America’s Cup. I would welcome others posting as well, but please don’t let this thread degenerate like the other threads. Well thought out support or rejection of the One Design ideas are welcomed. let’s prove that SA can have a sensible voice that is work listening to.

First, it goes against the very spirit of the Cup which has always been about who can design, build and sail the better boat on a 1 on 1 basis. Changing that turns it into any other match race championship, even if it is in the fastest match race boats.

However, my biggest concern is that this move will drive away followers and reduce the interest in the AC. Each “package” that becomes one design has a significant impact on how the viewers see the boats, If, as suggested, we see a one design platform married to a one design wing but with free development on foils and systems, the general public will see boats that look identical going at different speeds for reasons that are hard to explain. The motor racing analogy would be having everybody driving the same car but that tyre development is free. With AC34, it was easy for people to understand there was a rule and that ETNZ and OTUSA had developed different boats within that rule. The discussion as to which was better was pretty transparent. It will not be if the new rules come in.

If these rules are brought in, the America’s Cup will no longer be at the forefront of cat development. That will go back to the C Class and A Class. While I cannot comment on the C’s, I know that in the next 2-3 years in the A’s, we will see some pretty interesting stuff. Instead of it being trickle down from the AC as it has been from AC34, we will see the AC boats needing to play catch up in AC36. The chances are that by 2017, the AC boats won’t even be the most advanced cats around.

Finally, if costs really are the reason for going down this route, why aren’t we seeing efforts to cut costs in other areas. the boats mustn’t take the full force of the need for economy. They aren’t even the most expensive part of the whole campaign. Of course, we all know the real reason why other costs aren’t being tackled and that is because the biggest single cost, the one that is easiest to regulate, is wages and the very people making these decisions would be the ones who see their wages reduced, even if it is from some highly inflated number that is beyond the wildest dreams of any of them when the were young.

The only reason to support the one design ideas is to preserve the money earning opportunities for the sailors. I appeal to the sailors and decision makers to put aside their personal greed and remember why the America’s Cup was such a dream for them. I believe that every single sailor dreamed of sailing in the AC not for the money, but because it was the ultimate challenge, because of the acknowledgement of the history and traditions. To kill those in order to maintain the viability of teams is simply wrong.

make a circuit with me