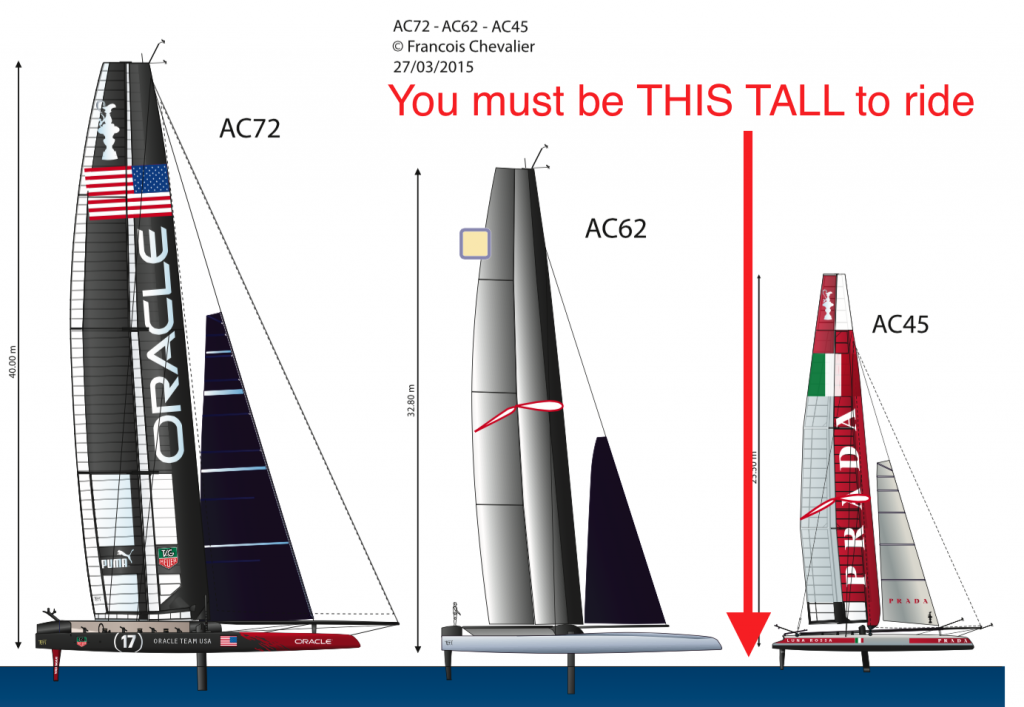 As Ferrari finally gives Italy something to cheer for in top level racing, the fanatical Italian fans are on the verge of losing their maritime standard bearer Luna Rossa thanks to the impending vote on the new America’s Cup One-Design 48. That’s right, folks, and you heard it here first, of course: The next AC will be sailed in one-design boats – at least if Tuesday’s Challenger vote goes the way we forecast.  And Emirates Team New Zealand may follow Prada right out the door, making Russell Coutts the most hated man in New Zealand for the second time, and in Italy for the first.

The SA Army has been working overtime since Coutts’ proposal reached the teams on Saturday, and we think we’ve nailed it thanks to some of our less enthusiastic friends inside (otherwise enthusiastic) teams.  So meet the new boat:

-Hulls and wings to be built by teams with strict ACEA controls (weight, dimension certs, etc.)

It may shock you readers who think we are perpetual AC antagonists, but we actually are fully in favor of the move to a smaller boat.  We have never and will never ‘hate’ the America’s Cup – we’re just embarrassed to part of a sport when open, public greed and repetitive incompetence govern the pinnacle event, and that’s why we let them know constantly.  But we love fast boats, and we dig foilers, and we’re stoked to see flying get so much love.

Meanwhile, the boat will be very sexy, but crucially, having the development dollars go exactly where they can be most effective – the foils – is extremely clever.  There should be no barrier to AC48s hitting similar speeds to the AC72s downwind and upwind, and while open-design foiling AC62s would unquestionably be quicker and a great deal more spectacular than the new 48, the majority of the public wouldn’t be able to tell the difference.

While we like the new boat, and we like the idea of a fun regatta in beautiful Bermuda, we are quite sure AC35 will be a flop, if only because it’s part of Russell Coutts Flying Circus.  We’ve learned to always bet against Russell when it comes to business and marketing, and never bet against him in sailing.

In addition, we can’t help noticing that ACEA has caught itself in a massive conflict: On one hand, they have an edict from Larry to ‘make the event self-supporting’, in other words, MAXIMUM CASH INTAKE, and hence, Bermuda’s $72M in cash and prizes.  On the other hand, Larry and Russell want to see an event with a long-term future, in other words, maximum public, TV and sponsor interest – which would mean a major population center in a transportation hub with tons of media.  That ain’t Bermuda, and that’s all you need to know about Ellison’s priorities.

Tuesday morning, the five teams of the Challenger Committee will vote on the new design.  If, as we expect, Team France, Ben Ainslie Racing, and Artemis all vote ‘yes’, we should see another team enter – a Japanese entry that will be a partner to the Oracle boys.  Luna Rossa will probably make good on its promise, killing off the team with by far the most time and money in the next Cup and the AC62 design – something we think Russell has been wanting to do since they made him look like an incompetent boob in San Francisco.  It makes us sad, but we have ZERO pity for Luna Rossa – as the second-in-time challenge, they had the right to take over for the embarrassment that was Team Australia and become Challenger of Record and prevent ALL of this.  Instead, the Italians chose to sit on their ass and be part of a committee, and they have no one to blame except themselves.

As for ETNZ, despite Doc Harvey already saying that ACEA would ignore its written contract to bring the qualifiers to Auckland, we think Coutts will use this tremendous leverage to get ETNZ on board with the change.  Dalts can ‘toe the line’ for his Italian friends during the vote and still remain part of the new AC48 Cup, if it will get the qualifiers back in Auckland – and his coffers filled.

Many of the die-hards think this move is the death knell for the America’s Cup, and if public sentiment depends on a real design competition, they’re right.  We think the spirit of the AC died a long time ago, and this move could turn it into something useful, at least.  What do you think?

you got a virus