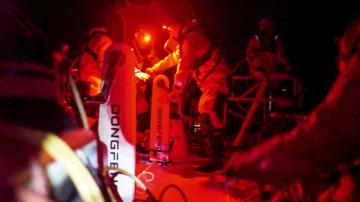 I see they are all still calling it a Chinese Gybe. From the videos IT IS NOT. A Chinese Gybe is where half the sail gybes, the other half doesn’t. Called so because a junk rig (or a gaff rig for that matter) sometimes the bottom part of the sail lifts and gybes – no boom on a junk rig & therefore no vang tension – and the top part of the sail ( due to heavy bamboo battens or the gaff) doesn’t immediately gybe.

With a Chinese gybe you end up with the main half/half, not nice but not as bad as “GYBING ALL STANDING” which is what is actually happening. Gybing unexpectedly with the old runner preventing the mainsail going out freely – now that is serious!

A good example of language been changed by constant incorrect use, but still incorrect. If you doubt the accuracy of this check out “Oxford Companion of Ships and the Sea” or Adlard Coles “The Sailing Dictionary”

Not surprisingly I have seen a “Chinese” Chinese Gybe (check my screen name) and it was really quite innocuous. Maybe it is just that a Chinese Gybe sounds more dangerous – China gets blamed for everything else after all – ha ha!

See ya on the water! – Shanghai Sailor.