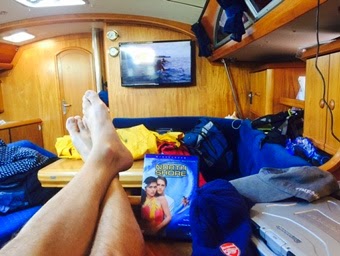 The 2015 Islands Race marks the start of the offshore racing season in Southern California. An eclectic mix of yachts from the Mexican border to Santa Barbara collect themselves in Long Beach and race around two islands and into San Diego every year.

Forecasters and weather routing experts were busy trying to predict the race and even posting their Expedition tracks on FaceBook for everyone to enjoy. On board the Jeanneau. Exit Strategy. we were busy planning how the crew would learn as much as possible to prepare themselves for Transpac.

Steve Ginder, who owns Exit Strategy, came to me about a year ago with a plan to do the 2015 Transpac. He had a vision to prepare the boat and his crew before the event and part of the training included the Islands Race. We have been working hard to get the boat up to speed with sails and rigging. A new bottom and about 1,000lbs of cruising gear is making a huge difference. The new sails in the inventory are: 2A, 4A, Code 0, Blast Reacher, Genoa Staysail, Spinnaker Staysail, #3 Jib and a back up 2A. An aggressive start to ensure all the angles are covered.

Our crew was pumped up for the first race on the boat and we went about our day getting ready. Bu that I mean hopping in a limo to Long Beach…. I am liking the Jeanneau standard so far! Read on.

bird on a wire Only 34 boats are registered just two weeks out from the 2011 Melges 24 World Championship, and after a seriously light Annapolis event a couple of years ago