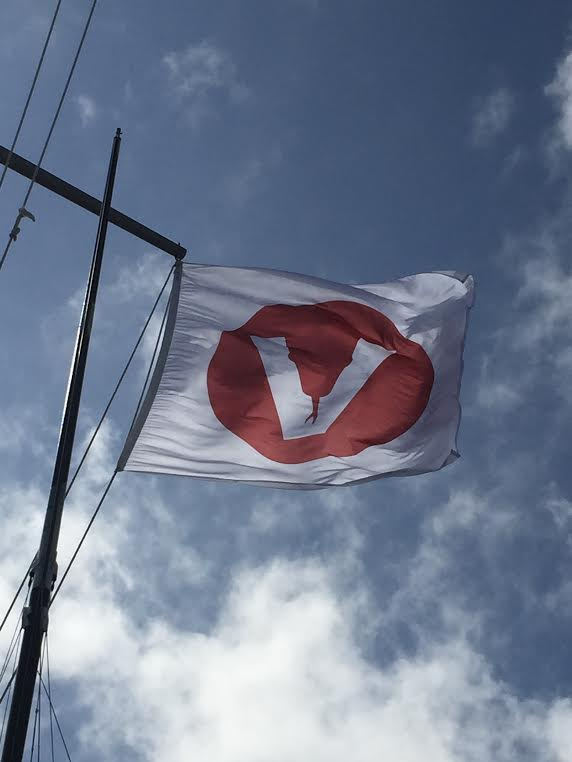 There are a lot of reasons to come to South Florida to race Vipers in March.  The weather is usually great.  The competition is excellent.  But it’s not all about the racing around the buoys.  There’s also the race to the restaurant, known as the midweek “Miami Scorch.”  Historically a blast reach from the mainland to Key Biscayne for a midday lunch, the event epitomizes the camaraderie in the Viper 640 Class and is an unofficial highlight of the week.

The two-day EFG Winter Cup Regatta for the Viper 640 sportboat, in Florida’s Biscayne Bay on March 1-2, was sailed in (by anyone’s description) ideal conditions. Easterly winds in the low to mid teens with seven well run races.  But as TV pitchman Billy Mays used to say, “But Wait…there’s more!” On Tuesday Sscorch 2015 – 2 a fleet of 16 Vipers assembled at the US Sailing Center Miami for the Miami Scorch – supposedly a screaming reach across Biscayne Bay to No Name Harbor at the southern tip of Key Biscayne. As it turned out, with a 12 knot easterly blowing, going over was pretty much a fetch. Sailing in the bright blue waters for an hour across the Bay was a delight. When the Armada arrived in NNH, everyone tied up at the seawall and congregated at the Boater’s Grille for some amazing Cuban food ranging from paella and pork butt to salads and fried plantains. A total of 65 sailors and guests sat overlooking the balmy lagoon of No Name Harbor while sea stories and boat-handling tips were shared by all.

This informal “race” started between the outer most channel markers for the Coconut Grove channel.  Hampton YC’s Steve Taylor and his crew were first to reach shore in No Name Harbor. Taylor was reported exclaiming, “We won the Scorch! Apparently I need to do more races that end at a bar.” Bermudian and EFG Winter Cup champion Somers Kempe, however, claimed bragging rights for having six feet on the shore—with drinks in hand.  Others claimed victory by being the first to arrive via automobile, though in the end, everyone was a winner.

During a “quiet break: in the conversation, Viper Class Administrator Buttons Padin welcomed the group, shared a few comments about the day, and thanked everyone for their continued support of the Viper Class Association and the sport of yacht racing.

After lunch and dessert, it was back in to the Vipers for a rather peppy spinnaker reach across Biscayne Bay to Coconut Grove with the Vipers hitting 12+ knots. Once back at the US Sailing Center, it was back to business as boat prep for the upcoming Bacardi Miami Sailing Week that runs Thursday through Saturday.

The Viper Scorch is just one more example of the personality and culture of the Viper 640 class. Yes, these folks sail extremely well…and extremely competitively; but when together they share information and insight, they go out of their way to help other Viper sailors, and the know that there is life for the Viper Class off the water as well as on.

The Class has already made its reservation to return to the Boater’s Grille next March following the 2016 EFG Winter Cup. Photos here.