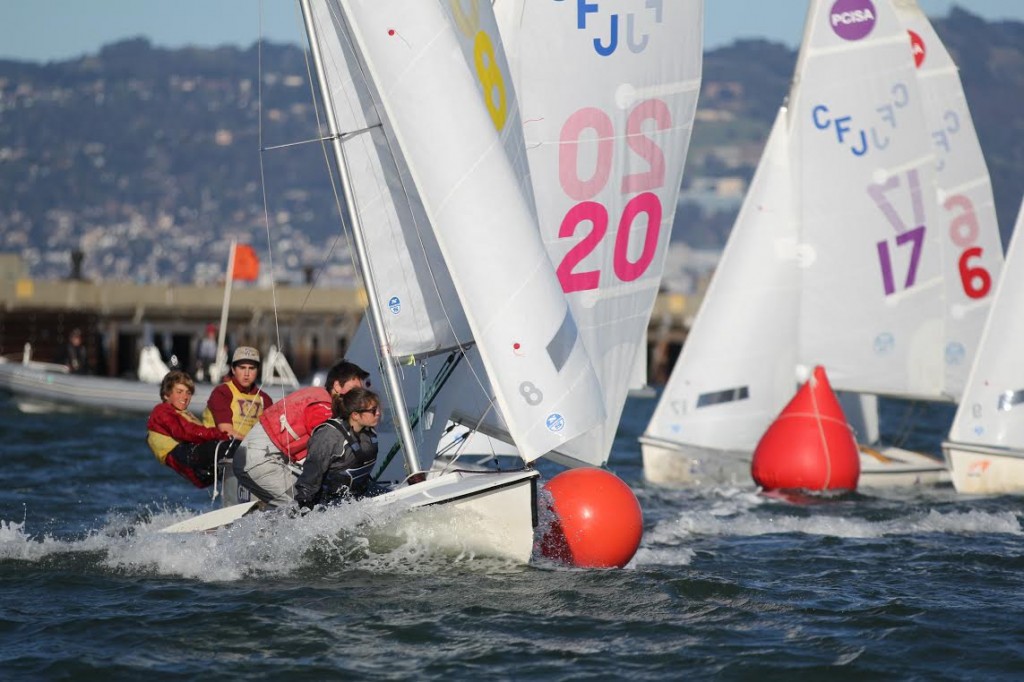 Being on a mark boat, pulling up and dropping marks, makes one appreciate the value of not wearing surf sandals for the job.  Having successfully not crushed my toes,  here is a short report of the 2015 High School PCISA Golden Bear Regatta held at the Treasure Island cove in the San Francisco Bay.

The Golden Bear regatta is  one of two northern calif PCISA regattas of the five in a normal PCISA calendar. Which scores towards the years season rankings.  (link)  The Sea Otter regatta in Monterey at the beginning of the season,  and the Golden Bear,  once the Cardinal Regatta at the Sequoia YC,  is the second.   A final end of season championship for both Silver an Gold fleets is split alternating  between Northern  and Southern California.

Who comes to this regatta?   There is a team cap, which is being reached more often, at 64 teams. This divides into  A/B teams so 120 or roughly 300+ sailors plus coaches and parents.  They come from as far away as San Diego/Newport Harbor and Northern California.

These regional regattas are supplied with a standard set of sails only used for these events while the boats are brought by teams and there is a boat rotation system. Treasure Island is man made for a former World Exposition then converted to a military base.  It lies at the apex of two SF bays coming together. The  protected cove has the imposing backdrop of the former and current bay bridges,  towering Eucalyptus trees and the San francisco skyline.

In general,  the course is surrounded by big buildings, and hills shifty wind  –  normally from the west but in winter time,  anything can happen. There is limited space to make a course, so, as seen on Sunday,  the wind direction was perpendicular to the length of the cove putting the start line in shallow waters leaving boats to dodge shallow water markers.  Moving the course out of the cove and into the full strength of sometimes 3+ knots of current and boating traffic is out of the question. Saturday early morning NorthEast wind bode no good when the prevailing breeze is Westerly. The wind slowly disappeared until about 10:30  when within seconds the Easterly did a 180 degree shift to the West and with a good 10knts.

The racing took off with the organizers focusing on getting through rotations and races off while the breeze held up.  So intent on maximizing sailing time,  races continued up to 5:30 and in the end,  boats were onshore and put away well after sunset.   Not Boston,  but still a stiff winter wind. Relatively flatwater  from prevailing westerly breeze turned into a bumpy ride on Sunday.   when the 10+  breeze from the NE allowed for a good fetch

Not only did the NE wind start the day but it stayed and did not let up which was predicted.  The difficulty was setting the course so as not to have the huge 45 degree shifts accentuated by the long 3 story hangars at the top of the course.  This also meant setting the start line in shallow water and not getting the course into the main channel. There were a couple full course moves but the racing continued for what has to have been the biggest wind in years for this regatta. The fetch coming from the East made dockside operations bumpy and even sent the dockmaster to ratchet down dock connection threatening to break loose.

Teams made their camps with excellent viewing which is a nice bonus for all. There was an “Annual Meeting”  to reelect the board of directors for the PCISA,  layout plan for transition from President Mike Segerbloom stepping down after 9 years of building up the organization. Tim Hogan,  a key organizer for years, along with Mike Segerlbloom, and others, said a few words and met to answer questions.

Overall,   this was one of the best Golden Bear Regattas ever thanks  to all of the dedication of those involved (parents included). Finally some advice for  sailors: Go out on a mark boat, committee boat, or support boat.   You will get huge advantage from understanding of the mechanics of setting a course. – Lyn Hines. Pics here.

the bitch is back