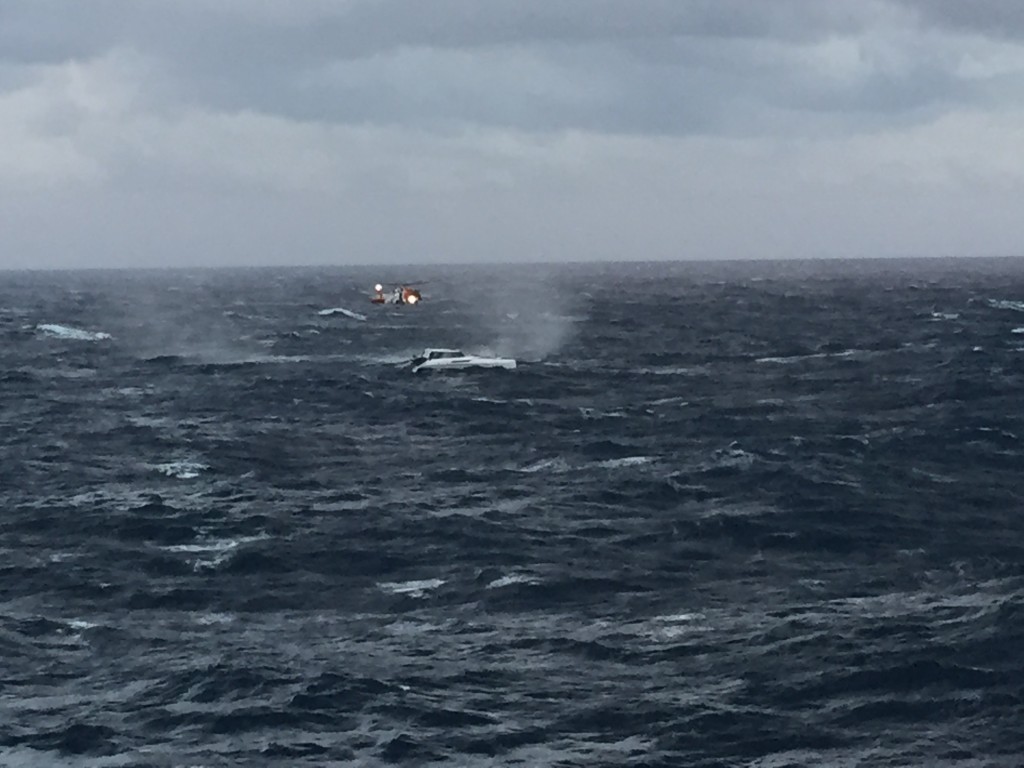 The PR folks at Crowley’s Vessel Management department dropped a beautiful if somber photo bomb on the web last night, along with a short report of their assistance to Rainmaker last month.  Meanwhile, we’re still finishing up the crew’s own ‘lessons learned’ from the incident, which you’ll see here soon.  More from Crowley (and there’s a closer shot of Rainmaker in Crescent’s lee here).

The crew of the Crowley-managed, 393-foot, heavy lift vessel Ocean Crescent recently provided assistance to five people aboard the damaged and drifting catamaran Rainmaker during a routine transit from Progresso, Mexico, to Halifax, Canada. Following a message from the U.S. Coast Guard (USCG) to render assistance, if possible, the Crowley crew onboard diverted the Ocean Crescent approximately 20 nautical miles to the west where they found Rainmaker stranded with two inoperable engines and a broken mast, which had penetrated the forward port window and destroyed the vessel’s navigational equipment.

First on scene, Ocean Crescent approached Rainmaker, pulled alongside and shielded the 55-foot sailboat from seas reaching six meters. The crew also relayed communications from the inbound USCG helicopter and search plane to the sailboat’s uninjured occupants, both of which arrived on scene about an hour after the Ocean Crescent. Once each of the sailboat’s occupants was loaded onto the helicopter, USCG dismissed Ocean Crescent from the scene, thanking the Crowley mariners for their assistance.

sails on the sails