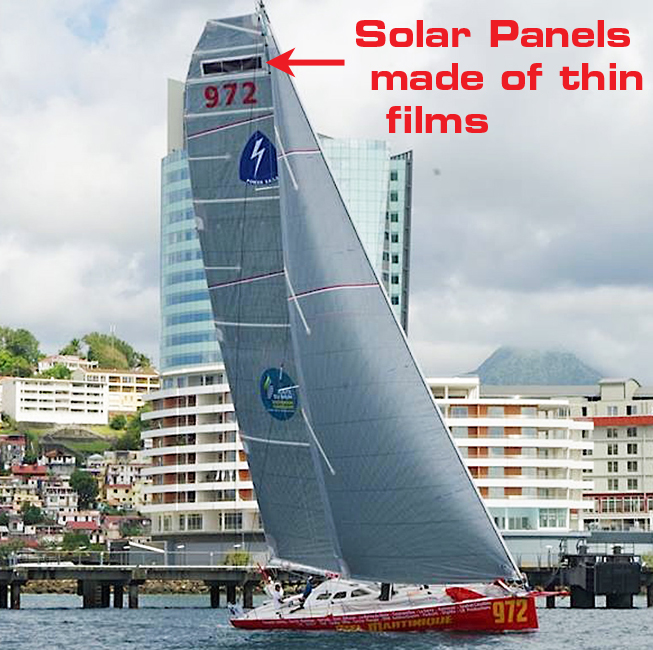 The silicon solar cell was discovered back in 1953, but it’s taken more than half a century of innovation to finally get yacht-based solar cells where they belong – on the sails.  Developers tested the durability and effectiveness of the system on this Open 50, and now the new PowerSails system is coming as an OEM option on the Arcona 380Z Zero Emission Yacht.  This is the kind of innovation that can really push sailing into the green atmosphere, and it’s been a long time coming.  Kudos to UK; here’s the presser.

Arcona Yachts of Sweden, Oceanvolt Electric Engines of Finland, and UK Sailmakers have teamed up to create the first zero emissions cruising sailboat: the Arcona 380Z, where the “Z” stands for zero emissions. Their combined efforts won Best-In-Show at the 2015 Helsinki Boat Show. The primary source of electrical power generator will be seven square meters of photovoltaic film attached to each side of the Tape-Drive mainsail built by UK Sailmakers Sweden and outfitted with the solar panels and components by UK France. The PowerSails® solar cells developed by Alain Janet, owner of UK Sailmakers France, will generate an average of 1,000 watts (1KW) per hour. According to Janet, “Modern thin-film photovoltaic cells do not need direct sunlight to generate electricity. In fact, the panels on the sail opposite the sun will generate 30-40 percent of their maximum output with the indirect and reflected light.”

oh that’s what it is

turn about is unfair play

where are they now?