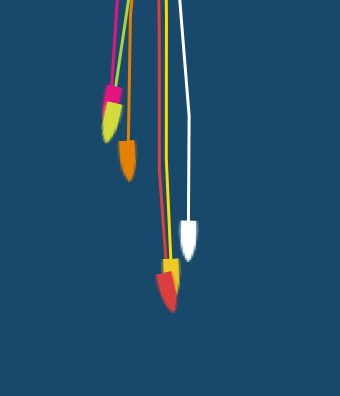 Question of the Week

For the first time ever, our own staff asked the question of the week, largely based on a consistent theme in all of the VOR threads in Ocean Racing Anarchy about the combined effects of AIS and the 6-hour position updates on the Volvo fleet and the racing experience.  Mr. Clean posed the question during a live interview with Bouwe Bekking last week, and then forwarded the same question to all the teams.  Sam Greenfield posted the Dongfeng response yesterday, and Sam Davies weighed in on audio, which you’ll find below Sam’s letter.

After I read your question, I went and asked Erwan Israel, our navigator, word for word what he thought.

The question was, “the current system (6 hour fleet updates, AIS inside 10 NM or so) has skewed the racing to a ‘stay with the pack at all costs’ mentality, meaning fliers are more rare and morale far more tied to the ability to see blips on a screen. What do you think about this unintended consequence of the AIS system in this race and –in simpler terms- do you want it or not?”

Don’t let this go to your head, but Erwan’s initial response was, “Wow. That’s a very good question!”

I took full credit and he’s been much easier to interrogate at the NAV desk ever since.

But it does bring up a good point, because instant access to the boat speed, distance and heading of every boat in eyesight has made each and every one of us screen addicts.

If a boat is within the AIS range Pascal makes sure that he or one of the crew is sitting at the desk with the microphone in hand, relaying bearing and speed to the trimmers and driver on deck.

Every. Five. Seconds – Like an old French sub hunter.

I wrote about it in my ‘Hunt for Red October’ blog during leg 3.

Erwan opts for a less maniacal approach, preferring to plot distance and bearing every few minutes onto an excel sheet so that he can see who’s gaining and losing. He doesn’t announce to the guys on deck, preferring to walk up and say it in person.

Everyone, myself included, agrees that having the AIS for safety –to alert for oncoming ships and fishing boats- is indispensable, but the crew were split when it came to the debate over performance.

Kevin Escoffier says, “I like it for safety only. Otherwise it’s like a smartphone. Once you get it you can’t put it down.”

Thomas Rouxel says bluntly, “No, I don’t like it. You don’t make your own strategy.”

First, ever the Swede, he says, “It’s not good or bad, it’s just a different version of the game.”

But when he overheard me asking Eric Peron just before sitting down to write this blog he admitted with a grin, “It makes it boring.”

For the sailors, yes, but from my point of view the last 48 hours have been anything but, as outlined in Charles’ French blog today:

“We’ve just gone through the worst night yet of this Volvo. On the menu we had no wind, big swell, stopping waves right on the nose and adverse current! At the end of the night enormous thunderstorm clouds with wind coming from all over the place. We came out of this night behind our two chasing competitors. Unfortunately the final cloud was fatal for us. But Abu Dhabi is just in front of us now, and we have 4 days to overtake. Once again, we are back in a drag and speed race.”

Which translates to; either Charles or Erwan or one of the sailors is glued to the screen at any given moment of the day watching Azzam’s speed.

Mapfre is out of range.

Eric Peron says, “I like it and I don’t like it. It takes away certain tactical options, and it opens others.”

Erwan Israel was more blunt: “I wish we didn’t have it – it forces the pack into a group mentality.

I know Erwan is thinking about our decision to sail to the North Philippines. His gut told him to sail north to Taiwan, like he and Charles did last race on Groupama, but the two chose to stick and cover Ian Walker’s team.

Horace told me “yes, we need it,” and Wolf said, “For safety, of course. I think it’s good for performance, unless you’re in first place and the guys behind you can see exactly how fast you’re going.”

Which leaves our skipper, Charles, who may need a reading prescription at the end of this Volvo.

“Bah. Well…” He hesitates. “I like it. It’s good. It’s interesting. You get to compare the speed and see where the other guys are.”

He’s glued to the screen as he says all this to me.

“But it’s a bit addictive, if you see what I mean.”

So, Clean, that’s the breakdown from Dongfeng Race Team. We’re almost approaching 1,000 NM to Auckland and Azzam is just off our bow.  Keep glued at your screen, and we’ll do the same.

And here’s Samantha Davies on the subject.