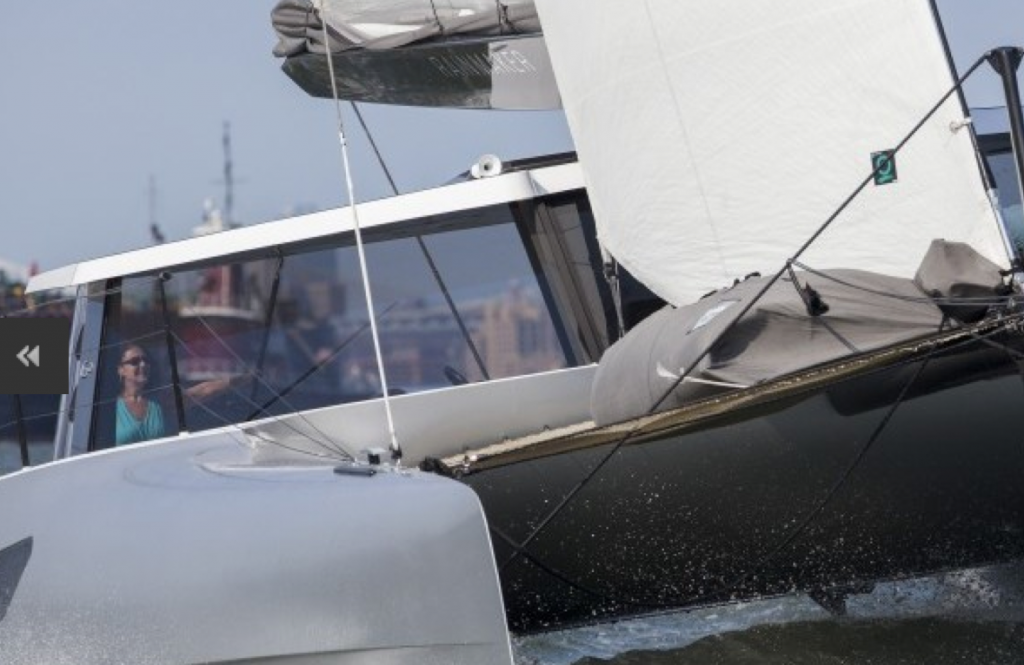 As the first of the widely anticipated Irens-designed Gunboat 55’s, Rainmaker was always going to get a lot of attention, and owner Brian Cohen spent much of last season cruising and racing (and getting Forbes magazine press) around the New York area under the watchful eye of a guy we’ve sailed with ourselves and consider one of the best; Yachtmaster and USCG-licensed Captain Chris Bailet. At the end of the season, Rainmaker headed back to the Gunboat factory in Wanchese for winter upgrades and warranty work, and when that was done, the waiting began for a good trip to the Caribbean.

When the weather window came in on January 29th, they set off, and the next day, Rainmaker dismasted 200 miles off the Carolina coast, her crew rescued by a USCG helicopter.  We spoke to Bailet for the details.

CB: We’d been monitoring weather along with Commanders for some time, and the forecast when we left it looked like high pressure across the stream into a downwind sleigh ride.  We expected up to 40 knots in squalls when the front came through, but all from behind us.

SA: So what was your routing, precisely?

CB: The plan was to cross the stream with a SW’ly while the high pressure held, then turn to the South as the wind went NW’ly and ride it quickly down to the islands.

SA: Were you sticking with it?

CB: We spoke to them on the morning after we left around 1000 – we were 5 nm North of rhumb to their Waypoint 1 for our route.

SA: And is 40+ knots in the North Atlantic in winter really Gunboat weather in your opinion?

CB: I’ve sailed about 30,000 NM on Gunboats in winds up to 65knots, and always come through.  We were extremely careful in our preparations and felt ready for anything, and I wouldn’t hesitate to take a Gunboat into that forecast again.

SA: Okay, so let’s talk about the crew.  We understand that Brian Cohen had little offshore experience, and he brought his 24-year old son Max, who had less.  Was this really the trip for them?

CB: Brian had done the maiden delivery on the boat from, NC-NY and then sailed the hell out of the boat – we went out pretty much every day last summer.  Max spent loads of time on the boat – he was comfortable too – though this was his first offshore experience. But a sleigh ride on a Gunboat with three pros wasn’t something treacherous or frightening – it was a great chance at a cool voyage.

SA: Who were the rest of the crew and what is their experience level like?

CB: George Cahusac and Jon Ollweather, who are probably the two offshore sailors I would most trust with my life or my boat. Both are impeccable seamen. Both hold multiple licenses.

SA: Ok, so we’ve done crew and weather.  Let’s talk about the boat.  Were there any majors done during the NC visit?

CB: Not really – a few small issues and the addition of a rollerfurling Solent and J1, a new spinnaker, some electronic upgrades and a prop change.

SA: And did you have time to check everything before you left?

SA: So everything’s good but the boat is taking her first major offshore trip in some shit.  What’s on the safety checklist?

CB: Jon and I made about a hundred runs to prepare the ditch bags, life raft, MREs.  Specifically, we made a rig ditch kit with a battery operated grinder with spare grinding wheels for carbon, a hacksaw with spare blades, a handful of ceramic knives, a few Leathermens, some underwater epoxy, and a set of wire cutters.

SA: Pretty comprehensive.  What about the life raft and other safety gear?

CB:We organized all the safety gear under the aft day bed, assuming this would be the easiest accessed place if the boat were to turn over or an emergency. Under the day bed was the life raft, a drybag full of MRE’s to last 5 people 4 days, complete offshore medical kit, our primary ditch bag (full of hand held flares, aerial flares, glow sticks, first aid, water bottles, heat blankets, mirrors, smoke, water dye, solar panel 12v charger, sat phone charger, hand held VHF and a hand held gps), and our rig ditch kit.

SA:So you set off in light air on the 29th.  Tell us about that day.

CB: After checking all systems, seatrial list completed and the boat loaded up, RAINMAKER departed the dock around 0130. I split watches 2 hours on, 4 off with the experienced sailors teaming with Max and Brian. Jon and Brian took the first watch until 0000, then George and Max until 0400, and I until 0600, planning for me to be the one on watch when we arrived Hatteras at sunrise. We expected to motor the entire way down, about 45nm. Before entering Pimlico sound, I conducted a safety meeting with all crew in the salon. Covering where all fire extinguishers were, safety gear location, medical, and duties in case of emergency, along with our planned route and weather conditions.

SA: So then what?

CB: Everything was chill, wind variable for a while, then coming in gradually from the SW and building through the night.  We took our first reef before nightfall and had a great sail all night long under 1st reef and solent in 15-20 TWS, running down waves to 18-20 knots of boatspeed, heading around 100-120 to keep the wind on our starboard hip.  The boat felt great and balanced.  Brian had brought a bunch of serious fishing gear aboard, and we’d nailed a monster yellowfin tuna in the stream – I mention that because we were all feeling quite lucky to be cruising so calmly at 18-20 knots that night while eating fish tacos that had been swimming a few hour earlier.

SA:When did it start to get ugly?

CB:In the morning, we knew the shit was coming, and we tucked in the third reef and set the little storm jib.  We were felling a little underpowered sailing 7-10 knots, the wind built to an average of maybe 27-35 by noon, with waves to 14 feet.

CB: Not really. We felt very controlled, checked the rig for any pumping action and then going through a rig check after the reef was tucked. All seemed cool, the mainsail clew locks were set in to help keep the belly contained and we let the autopilot sail 100-110 AWA.

SA: You were woken up by the dismasting.  What’s the last thing you remember before you went to sleep?

CB: At noon on the 30th, Jon is on watch after a 20 minute handover. TWS is between 25-40 kts, seas are between 12-15 ft. TWD of 220. Heading is 100, autopilot is steering to an apparent wind angle of 110. The boat was feeling stable, waves were starting to slap the wingdeck and the leeward hull. George stayed topside with Jon, so I could head down to catch some sleep.

SA: So you wake up to all hell breaking loose.

CB: At 1350, I wake up to a gust hitting the side of the hull like nothing I’ve ever heard, and I spring out of my bunk.  I see nothing out the starboard porthole except for white.  I run topside and see Jon at the wheel, eyes wide. By the time, I’m topside it’s a complete white out around the boat. We couldn’t make out the orange storm sail 10ft in front of us.  It sounds like we’re being run over by a freight train.

Check back soon for Part 2 of the Loss of the Rainmaker to find out about the attempted rescue, the actual rescue, the salvage attempts, and to watch video of the conditions just prior to the dismasting.   Big thanks to Bailet, Commanders, Gunboat, and Brian and Max Cohen for bringing us the story.